Sanremo 2021, the report cards of the first evening

The absence of the public makes itself felt, but conductors and guests pass the test with flying colors 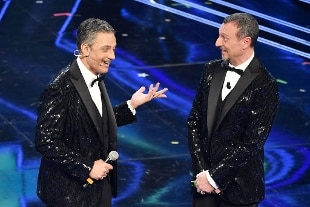 Once there was Sanremo.

He liked to say that the country stopped and for a few days thoughts and worries gave way to the lightness of pop music.

Of course, then reality occasionally broke into the Ariston, but always in a contingent way, as a respectful tribute to the problems of life.

This time the reality of a country that has been fighting the pandemic for a year has sat in the front row, in the seats with no audience in the theater, and only thanks to the skill of Amadeus and Fiorello has not completely taken the stage.

Overall, hosts and guests made it through the prime time with a full promotion.

The revelation was Matilda De Angelis, also at ease with the angular (by contract) Ibrahimovic, as Amadeus' kissing teacher and even in the duet with Fiorello in “Ti I'll leave”, the famous success of Fausto Leali and Anna Oxa.

The singers, on the other hand, at first listening we have heard them like this.

The new proposals include Gaudiano and Folcast, the first with two Latin-flavored songs (7) and the second with some soul reminiscences (5.5).

remains a superb interpreter, but somehow pays a pledge to the author of "You could have done more" (Gigi d'Alessio), who leans completely on his voice in a crescendo that however remains without 'final' (5.5 ).

“Very light music” starts with a whistle reminiscent of Morricone, then veers decisively towards the 80s with one ear to Battisti and the other to Battiato, up to the refrain on which it is difficult to remain still (7.5).

decides that his “Ora” must be shouted and unnecessarily angry, and he loses on the street what was supposed to be a romantic ballad that will also be followed by a part of the Sanremo public (5.5).

"Call me by name" was given among the favorites, they sing spaced out by a white ribbon, she does her part well, he indulges in autotune so as not to miss anything, then at the end he is moved and - to hell with the distancing - hugs her.

All very nice, followers will appreciate (6).

He introduces himself dressed as Leonardo Da Vinci to sing his "The Pharmacist", which begins with a quote from Frankenstein jr.

and continues happily exactly as Max Gazzè would sing a song by Max Gazzè (6.5).

The award-winning duo Mahmood-Dardust writes her this “Glicine”, not an unforgettable song, but she plays with her voice, a little scratch a little caress, and the ballad is served (7).

There is still the hand of Dardust - author of 5 songs in this Sanremo - behind "Voce": the youngest among the Big plays it not at all intimidated by the place and the occasion, and between love song and trap the theme song with his very personal style (6.5).

"Shut up and good" starts with a twisted guitar that immediately makes it clear what we are talking about: this is rock, there is no doubt.

Only they are good, but they are also beautiful, well dressed and it is not that they are too scary.

With "Perfect Moment" he emphasizes his creativity once more, skillfully mixing his rapper roots with swing and a sprinkle of soul (7).

Fausto Zanardelli and Francesca Mesiano, a couple in life, in "Flames in the eyes" declare their love by looking into each other's eyes, a love made up of small things and daily gestures: "I grate your tears, I'll salt the pasta, I'll eat you melancholy , so maybe then it will pass ".

She likes it, she has her audience, and in fact she closes in first place in the partial ranking of the first evening.

But "Dieci", his song, does not live up to its good interpretation (6).

At first it almost seems that "When I find you" is a song that does not focus exclusively on the voice of the interpreter, it is a modern pop, Dardust wrote it (here it is again).

Then comes the refrain and with it the temptation to indulge in virtuosity, which does not always pay off (5.5).

"Parlami" is another attempt to merge trap and Italian love song.

Not very successful, but the song will work well beyond its merits (5.5).