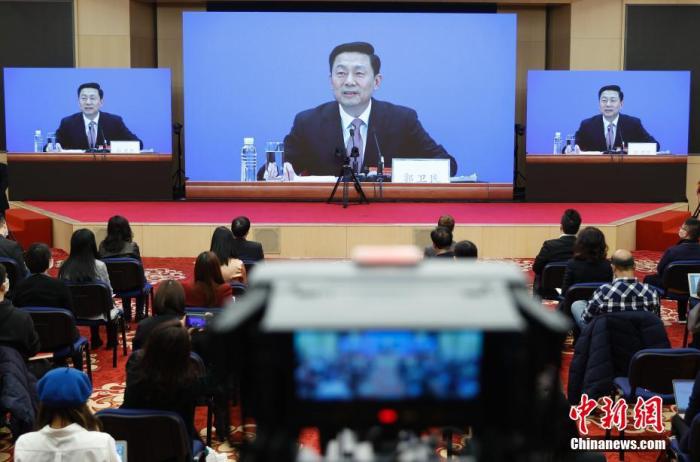 (On the scene of the two sessions) Faced with domestic and overseas concerns, Guo Weimin interprets China's confidence and determination

At the press conference of the Fourth Session of the 13th National Committee of the Chinese People's Political Consultative Conference held in Beijing on the 3rd, the conference spokesperson Guo Weimin responded to the question raised by the NBC reporter that "some observers believe that China's image continues to decline."

Due to the need for epidemic prevention and control, the first press conference of the two sessions of the country this year was conducted by video. Journalists at home and abroad in the venue of the Media Press Center in Beijing asked questions to the spokesperson in the press conference hall of the Great Hall of the People through video.

On March 3, the press conference of the Fourth Session of the 13th National Committee of the Chinese People's Political Consultative Conference was held in Beijing. Guo Weimin, the spokesperson of the conference, briefed Chinese and foreign media about the conference and answered questions from reporters.

In order to effectively prevent and control the epidemic and jointly maintain public health and health, the press conference will be conducted in the form of online video.

The picture shows the reporter attending the press conference at the branch venue.

Although it is a question and answer from the air, it does not lose the "flavor of gunpowder."

There were 12 questions, 5 of which came from overseas media. Among them, "Some people questioned the safety and effectiveness of China's new crown vaccine", "Some people think that China's current poverty alleviation standards are lower than the international poverty standards and whether they will return to poverty" and other sharp questions. Guo Weimin responded seriously one by one. .

Regarding the so-called "China's international image continues to decline," Guo Weimin said that the reasons are complicated. Some are because some foreign people don't understand China, and some are because they are misled by certain anti-China politicians.

He pointed out that for a period of time, certain anti-China politicians have slandered China, fabricated rumors, and confused people on issues such as the epidemic, Hong Kong and Xinjiang. This has also had a negative impact on some American and Western people.

He said that the new crown epidemic is still raging in many countries, and we are willing to work side by side and work together with all countries in the world to strive for an early victory over the epidemic and make efforts and contributions to protect the lives and health of people around the world.

The global economy was severely hit by the epidemic last year, but China has managed to control the epidemic well and has become the only major economy in the world that has achieved positive economic growth.

He said that the majority of CPPCC members believe that there are many uncertainties in the change of the epidemic, the world economic situation is still complicated, and it will still require hard work to maintain the stable operation of the economy in 2021.

"We believe that under the strong leadership of the Party Central Committee, we will be able to achieve new achievements in the first year of the 14th Five-Year Plan period.

The press conference, which was originally planned for about 1 hour, ended after more than 80 minutes.

Faced with various difficult questions, Guo Weimin smiled to reporters at home and abroad, and answered frankly, expressing his confidence in "Made in China" and the prospects of China's economic development, and also explained China's efforts to consolidate the achievements of poverty alleviation and build a community with a shared future for mankind. Firm determination on the side.