Hoof tracks, beer bottles and a secret room are among the finds after deep dives in the Sala silver mine. But the hunt for a royal seal continues. - It's a bit like Indiana Jones. They're looking for some mythical stuff down there. Among other things, a royal seal that is to be carved into the rock somewhere at 250 meters, says Niklas Ulfvebrand, business developer at Sala silver mine. 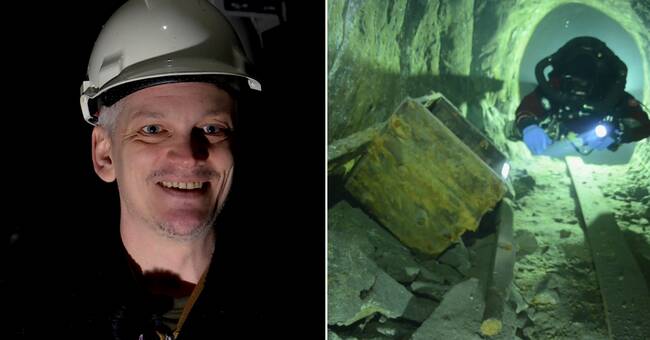 The silver mine has been closed to visitors since May last year due to the pandemic.

Instead, live guided tours and lectures are held online.

One of them is about the dives that are made at the bottom of the mine.

The royal seal has not been found despite repeated attempts.

However, new discoveries have been made in a mysterious room in the mine.

- Previously, it has not been known what that room was used for, but they have arrived at it until now.

So we will release that in a little while, says Niklas Ulfvebrand.

Despite the fact that the deepest part of the Sala silver mine is 318 meters, you can not go that far further.

This is because the water level has risen since the mine was closed in 1908.

- About half of the mining system is filled with water, from 155 meters to 318 meters, says Niklas Ulfvebrand, business developer at Sala silver mine.

Some of the water-filled parts have barely been visited since the 18th century.

There, the association Sala silvergruva diving club has for several years conducted dives.

Some of the discoveries are shown in lectures

On Wednesday 3 March, one of the brains behind the dives, Jonas Pavletic, will give a lecture where he tells about the findings and shows clips from the dives.

The lecture is part of the Sala silver mine's investment in digital streams and can be seen on the mine's play channel.

more about the diving project and demonstrates how it could sound when the miners sang hymns on the way down.