"Childish and naive approach": why Zelensky asked the head of the European Council to put more pressure on Russia

Ukrainian President Volodymyr Zelenskyy hopes that the European Union will increase pressure on Russia due to the situation in Donbass. He announced this at a joint press conference with the head of the European Council Charles Michel, who arrived in Ukraine on a working visit. In turn, Michel accused Russia of allegedly being part of the conflict in eastern Ukraine and not fulfilling the Minsk agreements. Experts note that Zelensky wants to get support from the EU without taking any steps to resolve the conflict in Donbass, while in Europe they prefer to shift responsibility for the situation from Kiev to Moscow. 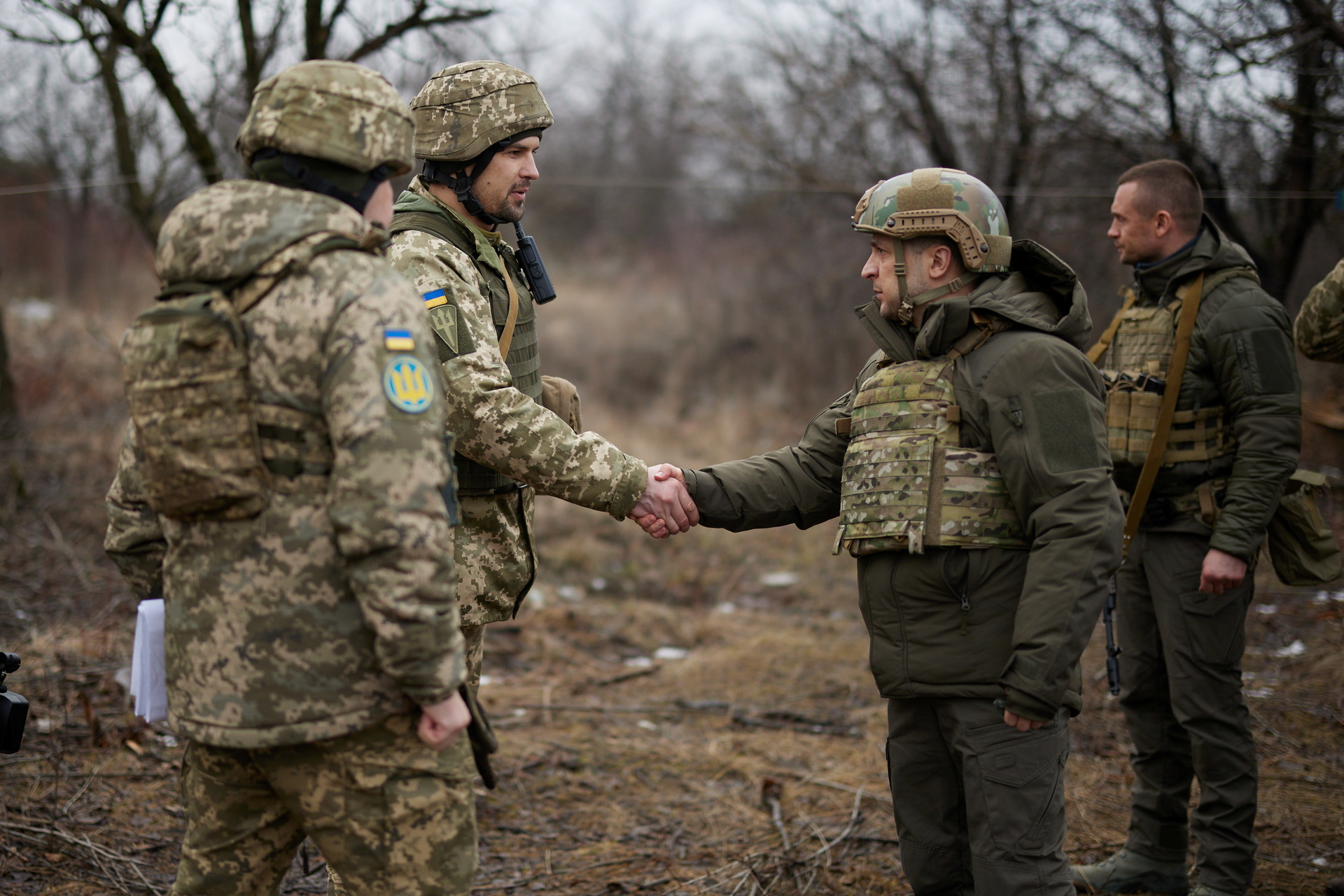 President of Ukraine Volodymyr Zelensky said that he would be grateful to President of the European Council Charles Michel for further mobilizing EU pressure on Russia.

“I would be grateful for the further mobilization of EU pressure on Russia.

Ukraine wants peace and is trying to achieve it through political and diplomatic means.

And we can only do this together, feeling the support of international support and your support, as the President of the European Council, for the sake of stability and security on the European continent, "Zelensky quoted Interfax-Ukraine as saying.

Zelensky thanked Michel for starting his trip to Ukraine from Donbass, calling it a "strong signal."

Also, the President of Ukraine expressed gratitude to Michel and the European Union for diplomatic and sanctions pressure on Russia due to the alleged failure to comply with the Minsk agreements and the "occupation" of territories.

“I am confident that the European Council chaired by Charles Michel at the end of this month will have a tough stance on Russian aggression against Ukraine,” Zelensky added.

In turn, President of the European Council (the highest political body of the EU, consisting of the heads of state and government of the Union countries) Charles Michel said that Russia should ensure full access of the OSCE mission to all territories of Ukraine that are not controlled by the Kiev authorities, as well as return to the Joint Center control and coordination (CCCC).

“We expect Russia to provide full access to the OSCE SMM to all territories of Ukraine that are not controlled by the government.

The COVID-19 pandemic should not be used as an excuse to further sever these regions from Ukraine.

We also call on Russia to return to the Joint Center for Control and Coordination, ”Michel said at a joint press conference with Zelensky.

Recall that Russia withdrew from the JCCC in December 2017 due to pressure on its representatives and provocations against them from Ukraine.

The President of the European Council also said that Ukraine had taken important steps to implement the Minsk agreements and accused Russia of being part of the conflict in eastern Ukraine.

“Unfortunately, Russia did not reciprocate Ukraine's positive steps to implement the Minsk agreements, and that is why our economic sanctions against Russia will remain in place.

Russia is a part of this conflict, not a mediator, ”Interfax-Ukraine quotes him.

Michel also said that the EU is providing "strong support in all possible ways to the efforts in the Normandy format and the Trilateral Contact Group to bring peace to the people of Donbass."

It should be reminded that over the course of several years Russia has repeatedly pointed out that it is not a party to the conflict in the east of Ukraine.

Russian officials drew attention to the fact that the EU is trying to shift responsibility for what is happening to Moscow, ignoring the nature of the crisis in Donbass.

At the same time, the Ukrainian side actually froze the implementation of the Minsk agreements.

Despite the meeting of the heads of state of the Normandy Four in 2019, the administration of Volodymyr Zelensky did not take any steps to implement them.

At the same time, Zelensky himself publicly expressed his dissatisfaction with the agreements and the need to follow their provisions.

So, in December 2020, Zelensky said that he would like to withdraw from the Minsk agreements, but he could not do this, as this could lead to the lifting of sanctions on Moscow.

“As I said at one of the briefings, I think that we cannot simply withdraw from the Minsk agreements.

Because the Europeans can lift sanctions from Russia and representatives of ORDLO (certain areas of Donetsk and Luhansk regions. -

But personally, I would go out, ”Zelensky said.

A similar position was voiced in February of this year by the head of the office of the President of Ukraine Andriy Yermak, who called the Minsk agreements impracticable.

“To be honest, in the edition in which they exist today, it sometimes seems to me that they signed with the goal and with the understanding that it was impossible to fulfill them, but Ukraine, and the president has said this many times, will do everything to so that the principles laid down in the Minsk agreements are fulfilled on our part, ”Yermak said.

With his statements, Volodymyr Zelenskyy demonstrates the position of Kiev, which consists in trying to stir up international interest in the problem of Donbass, but at the same time not to allow the situation to somehow get off the ground, Oleg Nemensky, a leading researcher at RISS, said in an interview with RT.

“Due to the fact that Kiev is not going to either return Donbass or let it go, the Ukrainian policy around the Donbass topic has come down to idle talk, words and speeches, behind which there is no reality.

However, Kiev needs to create the appearance that some kind of process around the topic of conflict settlement is taking place, that some progress is being made, as well as that the Ukrainian leadership has international support, ”the expert explained.

At the same time, despite the statements of the head of the European Council, the support of Ukraine from the EU exists only in words, Oleh Nemensky noted.

The political scientist added that Russia has repeatedly explained its position, but the problems it pointed out have not been resolved in any way.

“Charles Michel himself is well aware that his statement will not change either the position of Russia or the situation on the territory of Donbass.

It all comes down to just ceremonial statements, which the applicants themselves do not believe in, ”the expert emphasized.

In turn, Andrei Suzdaltsev, Deputy Dean of the Faculty of World Economy and World Politics at the Higher School of Economics, in an interview with RT, noted that, in Zelensky's understanding, pressure on Russia consists in organizing a solidary propaganda attack and imposing new sanctions.

“Ukraine expects that the EU and the US will frighten Russia, after which it will capitulate.

We can assume that Ukraine is thus trying to root its fear of the EU and the United States in the Russian establishment, ”the political scientist noted.

However, Kiev does not take into account that there is a big difference in the approaches and mentality of the Russian and Ukrainian elites, Suzdaltsev emphasized.

“While Ukrainian politicians fear the EU and the United States, Russian diplomats do not feel the same feeling toward the West.

This is a childish and naive approach that has nothing to do with real politics, so Zelensky will not be able to achieve anything in this way, ”the political scientist said.

Andrei Suzdaltsev added that Russia cannot, at Michel's request, provide access to any conflict zones, since it is not a party to it, but is the guarantor of the implementation of the Minsk agreements.

“In addition, the authorities of the DPR and LPR provide the OSCE with absolute access to all regions.

Another thing is that representatives of this organization often do not see this, turn a blind eye to the attacks of the Armed Forces of Ukraine on the territory of Donbass and behave in bad faith, ”the expert concluded.