Large parts of the lockdown are to remain in place for the time being. FDP boss Christian Lindner considers the conditions for possible loosening to be "paradoxical". He accuses the Chancellor of being hard to reach. 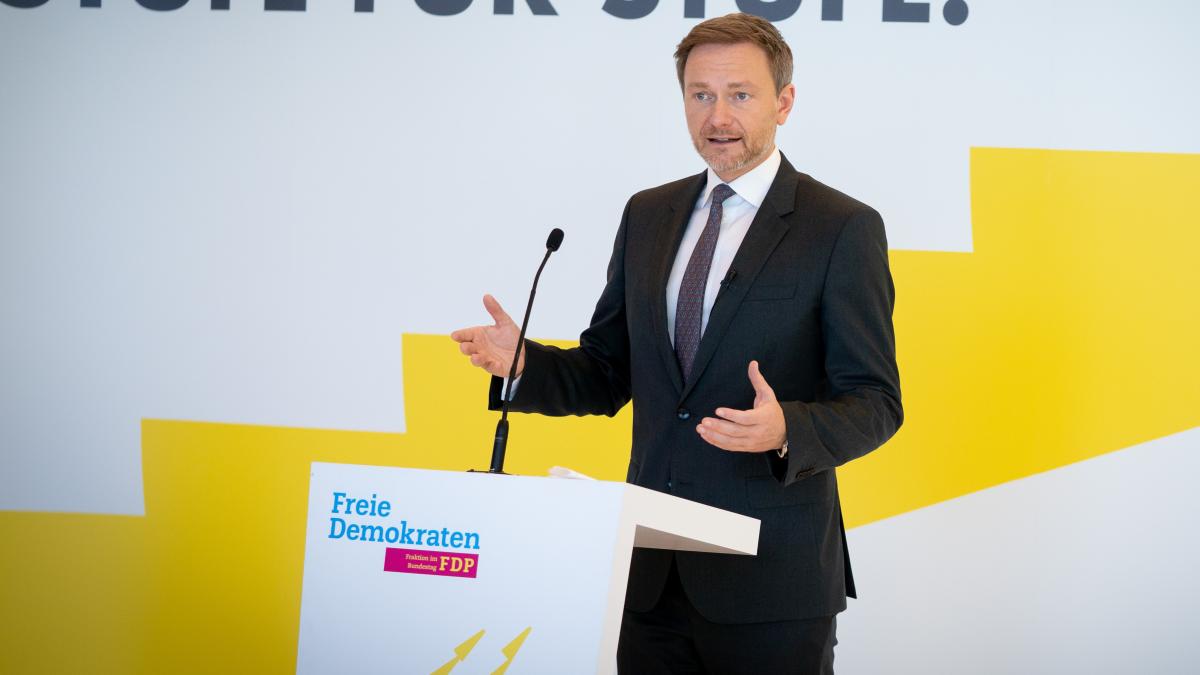 Before the Prime Minister and the Federal Government connected by video on Wednesday to discuss how to proceed in the Corona crisis, the draft decision was made public the day before, in keeping with tradition.

This document, at the latest, shattered hopes of rapid easing, which in some places had probably still existed.

According to the template, some restrictions are to be relaxed - for example, in personal contacts or when opening certain shops.

Nevertheless, the lockdown as such is to be extended until March 28th.

Chancellor Angela Merkel (CDU) spoke out in favor of cautious openings one day before the summit.

In a meeting of the CDU / CSU parliamentary group, she said, according to participants: "We are coming out of a long lockdown and now have to move forward step by step."

In the first few months, the easing in public life would have to be secured through massive testing, Merkel was quoted further.

"We have to test extensively in April, May, June," she said.

After that, the vaccinations would be effective nationwide, and testing would become less important.

At the parliamentary meeting, Merkel also pointed out that Germany currently has an incidence value that is “comparatively low on a European scale”.

The particularly contagious mutant continues to spread widely, its share is now 50 percent.

Chancellery Minister Helge Braun (CDU) said, according to participants in the parliamentary group meeting: “We have to counter the opening steps with something stabilizing.” This means the mass rapid tests.

But that only works if there are more tests.

It is in the hundreds of millions per month when it comes to costs.

According to the participants, Merkel also pointed out that the question of costs also played a role in the implementation of the test strategy.

"I only expect cautious steps," says the CDU politician with a view to the negotiations on Wednesday.

You are facing a "balancing act".

The prime ministers would have to take the epidemiological situation into account, even if there was pressure to open up.

It is good that one is trying to adjust the different situation in the federal states when opening bookshops or garden centers.

The Greens also warned against premature relaxation of the existing measures.

“There must be no uncontrolled opening, but responsible opening with protection,” said the chairman of the Green parliamentary group, Katrin Göring-Eckardt.

With quick tests, better tracking and more FFP2 masks, "a way between lockdown and relaxation" can be found.

At the same time, Göring-Eckardt warned that the federal and state governments should not say: “We just open and then we'll see if there are protective measures.” Protection is “the prerequisite for everything we will do in this difficult phase of the pandemic”.

She called for more rapid tests that are widely available, as well as faster vaccinations.

The connection between the broad use of rapid tests and the further opening steps is "paradoxical," he said.

If the number of tests is expanded, there will be “by the nature of things more people who have tested positive”.

In this procedure, a “permanently extended lockdown is applied”.

What has existed so far is ultimately an “extension of the previous lockdown policy”.

If the paper were implemented in this way, there would still be no opening prospects "over the next few weeks" for the catering trade, for example.

Lindner also criticized Chancellor Angela Merkel (CDU) again because she does not want to comment in the context of the federal-state round in the Bundestag on Wednesday.

"You have to face the debate here in Parliament," demanded Lindner.

After the previous federal-state round on February 10, Merkel had issued a government statement.

Lindner emphasized that a government declaration was actually necessary before the federal-state consultations.

The fact that Merkel does not speak up in the Bundestag is "a recklessly turned down opportunity to promote trust among the people".

The AfD parliamentary group leader Alexander Gauland published a fundamental criticism of the federal government's strategy on the occasion of the likely extension of the lockdown.

This must “turn away from the arbitrary incidence values.

The decisive factor is the number of those actually sick and the stress and performance of the health system. "

Measures such as the prohibition to stay in parts of Düsseldorf are described in the press release as "grotesque" - with such regulations, police officers would be "abused as a public shock".

Scientists from epidemiology, information technology and economic research have meanwhile spoken out in favor of at least 8.5 million corona tests per day in Germany.

A massive expansion of free or inexpensive tests - in conjunction with a professional digital certificate for free testing - could make the lockdown superfluous and prevent a third wave of infections.

In fact, such an extension is also planned by the government by April.

The top value in Germany in 2020 was only 1.6 million tests per week, criticized the President of the European Institute for International Economic Relations at the University of Wuppertal, Paul Welfens.

Together with the epidemiologist Ralph Brinks from the University of Witten / Herdecke and the Marburg computer scientist Alexander Markowetz, the economics professor presented a joint concept for a way out of the corona-related restrictions.

The first lockdown at the beginning of the pandemic was still necessary, said Markowetz.

“All you saw after that was self-inflicted pain.

The entire aftermath since July last year is a chain of digitization failures ”.