Bologna in the red zone from 4 March, the province of Ancona from Wednesday

Bologna and its province in lockdown until 21 March. The president of the Marche region: order until March 5, then new provision after the dpcm 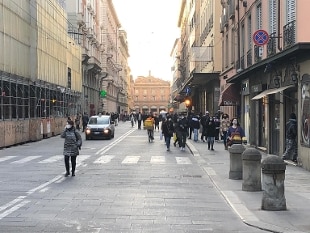 02 March 2021 Bologna and its province will be in the red zone from Thursday 4 March until 21 March.

This was announced by the mayor Virginio Merola, after the unanimous decision of the mayors, shared by the Region which will soon sign the ordinance.

Nurseries and kindergartens are also closed, as well as non-essential commercial activities.

"On behalf of the mayors of the entire metropolitan city of Bologna, I ask the Government to speed up the vaccination plan in all possible ways - added the mayor - and to provide for adequate economic supplements for the activities involved in the red zone provision that will adopt the our Region, as well as parental leave, even retroactive for parents ".

Province of Ancona in the red zone from 3 March

The president of the Marche Region Francesco Acquaroli signed the ordinance n.7 after a meeting with social partners and local administrations.

"I inform you that I have signed the ordinance for which from tomorrow morning, March 3, from 8, the province of Ancona will pass into the red zone. - writes on Fb Acquaroli - The provision will be valid until the expiry of the Dpcm in force, that is Friday, March 5. For the following period we will issue a new provision, as soon as the definitive text of the new Dpcm is known, which will come into force on Saturday, March 6 ".

"The situation is constantly changing and is constantly monitored - explains Acquaroli - and the weekly analysis of the data, carried out yesterday, highlighted the need to intervene with a further measure on the province of Ancona".

"All the other territories remain attentive - adds the president - with particular regard to the growing epidemiological trend in the province of Macerata".

"To everyone I recommend the utmost respect for the provisions contained in the regional provisions and in the Dpcm. - writes Acquaroli - It is essential to halt the spread of the virus as soon as possible. This is the moment of maximum responsibility for each of us".

The ordinance "strongly recommended that teaching activities be carried out remotely in all schools where there is an increase in cases of infection by the Sars-Cov-2 virus, also on the basis of what is foreseen by the Technical Committee scientific".

"It is always necessary to make use - then foresees the act - of the self-certification regarding the causes of the move".

The provision, which may be "modified or extended" based on the trend of the RT, of the overall epidemiological situation in relation to the relative indicators, also recommends "strongly" to "strictly comply with the prohibition of gathering people in public or open places to the public, inside and in the vicinity of any type of activity and in public and private areas for public use ".