In their comebacks, Müller and Gnabry take on leading roles again. FC Bayern's 5: 1 against Cologne impressively ends the short phase of weakness in the league. 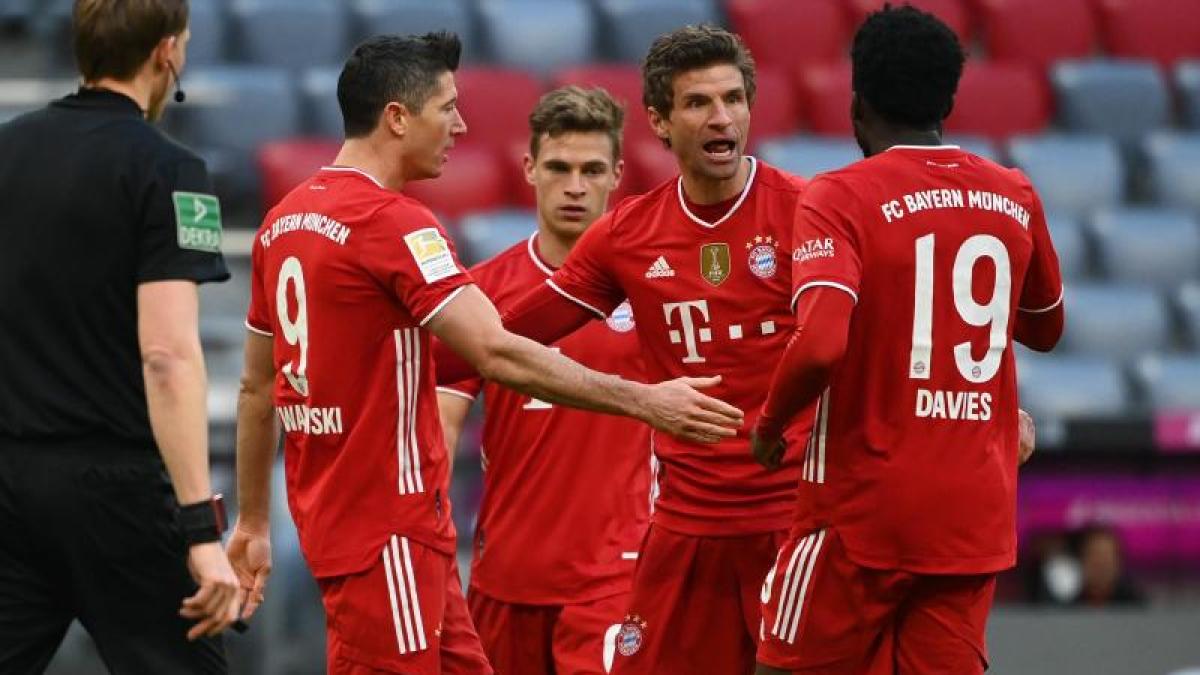 Munich (dpa) - The perfect comeback appearances by Thomas Müller and Serge Gnabry even pushed the next record-breaking record from record-breaking Robert Lewandowski into the background.

After a two-week break, template king Müller and double packer Gnabry ensured that FC Bayern was able to leave its short Bundesliga sadness behind with a scoring 5-1 (2-0) against 1. FC Köln.

«It was a bit boring at home.

Now it was fun again, ”said the cheerful Gnabry.

Without him and Müller, there was only one point in the past two league games.

Just in time for the football classic against Borussia Dortmund on Saturday, the duo is now back.

During the Sunday unit in the Munich sun, Gnabry and Müller, who had recovered from a torn muscle, sweated in the small team after surviving the corona infection in order to catch up further training deficit.

After the league leaders' difficult weeks in terms of personnel, coach Hansi Flick is pleased that two more top performers are back after Leon Goretzka, who was called up for over 90 minutes for the first time.

"You were very valuable as a substitute," said the 56-year-old, who now has more training opportunities after the cup.

“Now we have a week to bring them both closer together.

We are happy that everything went so well. "

Only a few seconds were missing for even more luck.

Because on the TV set, Flick had to watch the last-minute winning goal from RB Leipzig against Borussia Mönchengladbach on Saturday evening (3: 2).

So it remains with two counters as a cushion before last year's Champions League semi-finalists.

"Unfortunately, we lost our lead a bit in two games," Gnabry recalled the 3: 3 against Bielefeld and the 1: 2 in Frankfurt.

"We now want to win every game again and ultimately become champions."

The programmed final for the bowl is on April 3rd in Leipzig.

That's not an issue for Flick yet.

«We go from game to game.

The approach did us good last year, ”said the coach.

«What comes out in the end is up to us.

If we perform well and have success, we can also be at the top. "

The clear 5: 1 through the Munich league premier goal by Eric Maxim Choupo-Moting, who advertised on the wing for an extension of his one-year commitment, and the brace from Gnabry and Lewandowski expressed the offensive superiority.

But not that things were a bit shaky in the meantime.

Ellyes Skhiri's 1: 2 against a collectively failed Bayern defense was followed by Dominick Drexler, who stole the ball from Manuel Neuer outside the penalty area, when the score was 1: 3.

"For the way to the future, we have to chalk ourselves to no longer have these shaky phases in the game and that we can get out of there faster," warned Gnabry.

“When Thomas and I came in, it was a bit tricky for us.

That succeeded with the eleventh assist from Müller as number 1 in the league in this ranking list as well as the Gnabry goals.

"If you have the opportunity to change during the game, that's unique," said FC coach Markus Gisdol about the "felt 200 million" on the Munich bank.

FC Bayern is “the ultimate in club football at the moment, maybe even seen all over the world”.

That is also due to world footballer Lewandowski.

28 goals after 23 games is the best score in the hunt for Gerd Müller's 40-goal record.

The "Bomber" and Lewandowski had 25 hits as the best brand so far at this point in the season.

However, Flick chose neither the returnees nor the goal machine as the man of the game.

Goretzka, with whom Bayern found their way back to the “Matchday mode” in the 4-1 win against Lazio in Rome, stood out as a three-time preparer.

«He prepared the goals excellently.

That's why he was the player of the day for me, ”said Flick.

And the ex-Schalke Goretzka let the sign of strength be followed by the declaration of war for the German Clásico against BVB.

Data and facts about the game