Battles raging in Yemen ... the Houthis intensify their targeting of Marib, and the United Nations warns of the worst humanitarian crisis in the country.

Yemeni sources said that confrontations between the National Army forces and the Houthis continued on several fronts in the governorates of Marib and Al-Jawf, while the United Nations says that the war has made Yemen "an unviable country." 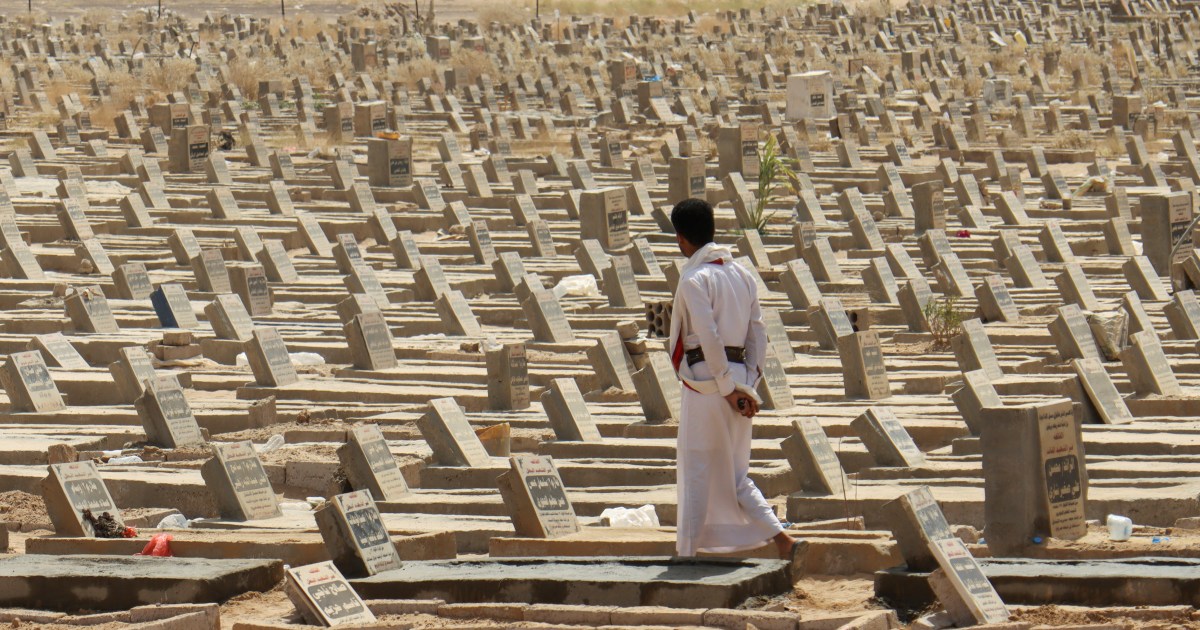 Yemeni sources said that confrontations between the National Army forces and the Houthis continued on several fronts in the governorates of Ma'rib and Al-Jawf, while the United Nations says that the war has made Yemen "an unviable country."

The Army Media Center announced the downing of a booby-trapped drone belonging to the Houthis in the Al-Nudud area in the Khub Washa`f district in Al-Jawf governorate.

He also announced that the army artillery destroyed two military vehicles loaded with the Houthi militants in the "Kassara" area, west of the city of Ma'rib, and killed those on board.

Official and popular funeral ceremonies were held in the city of Marib for Brigadier General Abdul Ghani Shaalan, commander of the Special Security Forces in the Ma'rib Governorate, who was killed during clashes with the Houthis in the Sarwah area, west of the governorate.

On Sunday, the Yemeni army announced that its forces had shot down a "drone bomb" of the Houthis, in the northern Al-Jawf governorate.

This came in a brief statement issued by the Media Center of the Armed Forces (affiliated with the Ministry of Defense), and the statement stated that "members of the National Army shot down a booby-trapped plane launched by the Houthi militia towards military sites in the Nudd Front, east of Al-Hazm, the capital of Al-Jawf."

From time to time, the government forces and the Arab military coalition supporting them announce that they have dropped the booby-trapped marches launched by the Houthis.

Government forces and Houthi militants share control of Al-Jawf, which is linked to a land border with Saudi Arabia.

In a related development, 5 Yemeni civilians were killed, including a woman and a girl, when a mortar shell fell on a house close to the contact lines between government forces and the Houthis south of Hodeidah (west) on Saturday, in an attack that the two sides accused of standing behind it.

On Sunday, the Houthis in Yemen adopted ballistic missile and drone attacks against the Saudi capital, Riyadh and other regions in the Kingdom, promising "wider" operations, as their military spokesman said.

The Saudi-led military coalition against the Houthis in Yemen announced on Saturday that it had intercepted a missile over Riyadh and 6 drones launched by the Houthis on other regions in the Kingdom.

The Saudi Civil Defense said that "shrapnel was scattered in several residential neighborhoods in separate locations" in Riyadh, explaining that "one of the shrapnel resulted in material damage to a house without causing human injuries or deaths."

In a statement carried by Al Masirah TV, which is close to the Houthis, who are accused of receiving support from Iran, Houthi military spokesman Yahya Saree said on Sunday, "The air force and the missile force are carrying out a large joint offensive operation towards the Saudi rear."

He talked about the use of “a ballistic missile and 15 drones, including 9 aircraft (...) that targeted sensitive sites in the capital of the enemy, Riyadh,” while the other six targeted “military sites in the regions of Abha and Khamis Mushait,” in the south of the Kingdom.

In a related context, a local source said that a prisoner exchange operation resulted in the release of 18 Houthis and the same from the National Army, based on the efforts of a local mediator in the Marib Governorate.

The war in Yemen has turned this country into an "unviable state" that will be "very difficult" to rebuild, the United Nations Development Program warned, ahead of a donors' conference on Monday aimed at averting famine.

Tens of thousands have died in the six-year-old conflict, which the United Nations describes as the world's worst humanitarian crisis, while millions of people are starving in the poorest countries of the Arabian Peninsula.

In an interview with Agence France-Presse, the resident representative of the United Nations Development Program, Oak Lutsma, said that "development factors evaporated over the course of the war," and Yemen was witnessing "the worst development crisis in the world."

"Yemen has lost more than two decades of developmental progress, and it is certainly one of the poorest countries in the world, if not the poorest at the present time, given the negative development indicators that we see," he added.

"If it continues like this, it will be very difficult to rebuild Yemen as a state. If more development factors are destroyed and people become poorer, (Yemen) will become an almost unviable state," he warned.

The battles between the forces loyal to the internationally recognized government backed by the Kingdom of Saudi Arabia, and the Houthis, allied with Iran, put the country on the brink of mass destruction.

Schools, factories, hospitals and companies have been destroyed, and children have been recruited to fight, while hundreds of thousands have lost their livelihoods and famine threatens millions.

"The war must stop now, the Yemenis have suffered enough," Lutsma said, calling on donors to quickly provide financial aid after the conference, which is supposedly hosted by the United Nations, Switzerland and Sweden.