In 2021, the Ground Forces of the Russian Federation will receive more than 300 modern armored personnel carriers of the BTR-82 family with improved characteristics. This was reported by the RF Ministry of Defense. A combat module with a 30-mm 2A72 cannon and a PKTM machine gun made it possible to significantly increase the vehicle's firepower. And thanks to the use of anti-splinter material on the inner surfaces of the hull and the anti-mine coating, its protection was also strengthened. Experts note that the BTR-82A is significantly superior to foreign counterparts. Analysts call these armored personnel carriers universal and fully meet modern requirements. 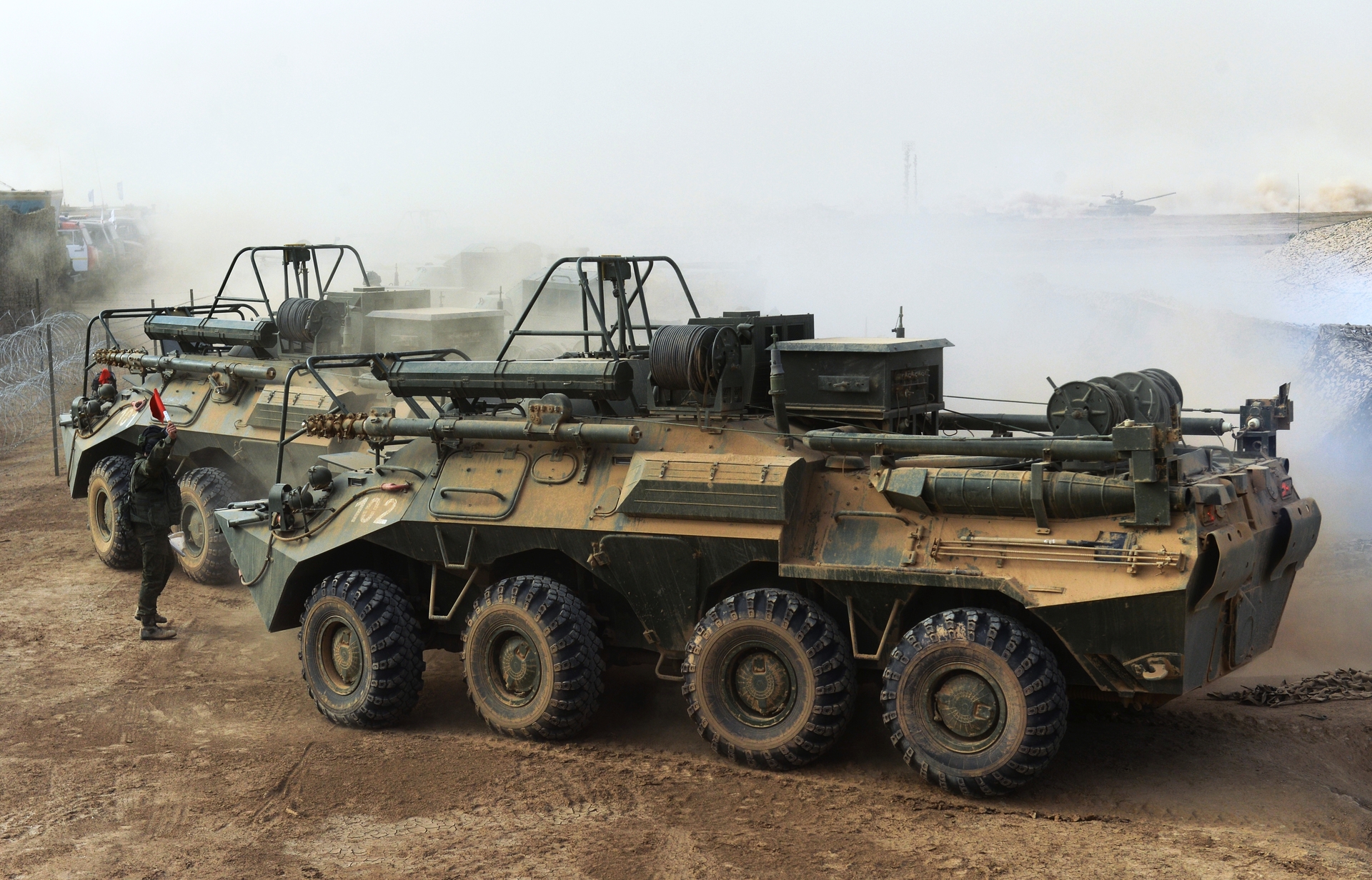 In 2021, more than 300 modern armored personnel carriers with improved combat and running characteristics - BTR-82A and BTR-82AM, will enter service with units and formations of the Ground Forces of the RF Armed Forces.

This was told in the press service of the Russian Defense Ministry.

“Within the framework of the state defense order, the manufacturers will transfer more than 300 pieces of equipment to the Defense Ministry,” the ministry said in a statement.

“A new combat module was installed on the BTR-82A, which made it possible to significantly increase the combat power of the vehicle.

It includes an automatic 30mm 2A72 cannon and a PKTM machine gun.

To increase the reconnaissance capabilities and firing efficiency in the armored personnel carrier, a combined sight for the gunner with a stabilized field of view is installed.

This made it possible to increase the effectiveness of the armored personnel carrier's firing by 2.5 times and conduct aimed fire on the move and at night, ”the Defense Ministry stressed.

Also, cars of this class have increased security thanks to an anti-splinter coating made of a multilayer synthetic material installed on the inner surfaces of the body.

In addition, the floors under the wheels and the body of the armored personnel carrier are covered with an anti-mine coating, and the seats for the crew and troops are made on a special suspension that reduces the effect of the blast wave.

The armored personnel carriers of the BTR-82 series represent a deep modernization of the Soviet BTR-80.

Their development began in 2009 - the specialists of the Arzamas Machine-Building Plant were faced with the task of creating a machine with an increased level of protection, firepower and mobility, while improving its operational characteristics.

The first prototypes of the BTR-82 were assembled in the same year, and already in 2010 a small series of the BTR-82A was produced for military tests, which took place in the Southern Military District.

After successfully passing tests in 2013, the BTR-82A was put into service.

The vehicle's crew consists of three people (commander, driver and gunner), seven more fighters in full gear with weapons fit into the troop compartment of the BTR-82A.

The combat weight of the vehicle does not exceed 16 tons.

Rosoboronexport notes that thanks to the new KamAZ-740.14-300 engine with a capacity of 300 hp, as well as improved units of the armored vehicle, it was possible to increase its resource, increase the reliability of the chassis and increase average speeds.

Thus, the BTR-82A can accelerate to 80 km / h on the highway (the cruising range along the highway is 700 km) and overcome water obstacles at a speed of 9 km / h.

The main armament of the modernized armored personnel carrier was a 2A72 automatic cannon with a caliber of 30 mm with an ammunition load of 300 rounds.

A 7.62 mm PKTM machine gun with 2,000 rounds of ammunition acts as an auxiliary weapon.

The combat module is equipped with a TKN-4GA-01 combined sight, which allows the gunner to fire at any time of the day - both from a place and on the move.

In addition, the BTR-82A armament complex is stabilized in two planes - together with new aiming devices, this increases the efficiency of target detection and destruction.

There are several modifications of the BTR-82.

In addition to the BTR-82A, the Ministry of Defense also mentioned the BTR-82AM armored personnel carrier - it is a Soviet BTR-80, modernized during a major overhaul and equipped with a new engine and a combat module of its "brother" - BTR-82A.

In turn, the modification of the BTR-82A1 is equipped with a remotely controlled combat module developed by the Central Research Institute "Burevestnik".

The BTR-82AT version has a set of additional screens and grilles for protection against large-caliber machine guns and rocket-propelled ammunition, and is also equipped with the Kornet anti-tank missile system.

At the international military-technical forum "Army-2015", the BTR-87 developed by "Military Industrial Company" LLC was shown for the first time.

This is a deep modernization of the BTR-82A with a new hull, in which the engine compartment is located in the front, and the rear compartment is intended for paratroopers.

Speaking about the modernized Russian armored personnel carriers, analysts first of all note their higher degree of mine and fragmentation protection in comparison with the basic model of the BTR-80.

"Also, new combat modules were added, thanks to which armored personnel carriers effectively carry out fire support for the infantry," military expert Alexei Leonkov said in an interview with RT.

He believes that the combat effectiveness of Russian vehicles of the BTR-82 family is an order of magnitude higher than that of their Western counterparts.

In addition, given that the Ministry of Defense attaches great importance to the automation of command and control of combat forces, Russian armored personnel carriers fit into these tactical units, into the contour of modern combat, ”Leonkov stressed.

"Meet the requirements of today"

It should be noted that in recent years, armored personnel carriers have been actively supplied to the Armed Forces of the Russian Federation as part of the implementation of the State Armament Program.

So, in 2020, more than 460 armored vehicles BTR-82A and BTR-82AM entered the troops, the Ministry of Defense reported.

Last week, the military department clarified that by the end of the year, the Ground Forces will receive more than 800 units of armored vehicles.

“The troops will receive more than 90 modern T-72B3, T-72B3M tanks, about 80 T-80BVM units with a gas turbine power plant, a batch of T-90M“ Breakthrough ”tanks ... In addition, more than 120 units will be delivered to formations and military units. infantry fighting vehicles BMP-3, over 280 modernized BMP-2 with a fighting compartment "Berezhok", - said the ministry.

It is noted that the enterprises of the military-industrial complex will transfer samples to the troops that have successfully proven themselves in operation in various climatic zones.

According to military expert Yuri Knutov, the new armored personnel carriers will significantly strengthen the units of the RF Ground Forces.

“We can say that the BTR-82A and BTR-82AM vehicles in terms of firepower, the possibility of their use in various combat conditions, including in Syria, have been refined and reached a new level - they meet the requirements of today.

Thanks to the development of combat modules, today armored personnel carriers of the BTR-82 family can not only deliver personnel to their destination, but also fight infantry and lightly armored targets, which is fundamentally important when conducting military operations, the analyst emphasized.

“If we compare these machines with foreign counterparts, then neither the US nor the NATO countries have anything like this.

The interlocutor of RT added that the Armed Forces of the Russian Federation are actively equipped with armored vehicles, which have already passed tests on the battlefield.

"The Russian army is gradually switching over to equipment that has shown itself well in recent decades in various military conflicts," the expert concluded.