Spezia irreducible at the 'Peak': Parma recovered from 0-2 to 2-2

As against Udinese, the Gialloblù still waste a double advantage: Karamoh and Hernani score, hosts who re-emerge in the second half with a brace from Gyasi. For the ducals further salvation 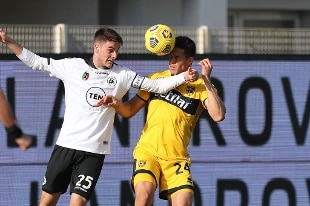 As at the 'Tardini' against Udinese, even at the 'Picco' Parma wasted a 2-0 advantage: this time the home team from Spezia (2-2) recovered.

Quickly jump the balance (17 '): percussion on the right of Karamoh, who falls on the left-handed (avoiding Bastoni) and puts her under the furthest intersection.

Doubling of the Gialloblù eight minutes later (25 '): free kick by Brunetta, the winning deflection from the goal is by Hernani, with the ball passing between the legs of a not perfect Provedel.

Sepe rejects with his fists the central conclusion of Verde, in the 41 'canceled with the Var the 1-2 of Maggiore (starting offside of Bastoni, author of the cross).

Excellent first half of the ducals, deservedly ahead.

The attitude of the Ligurians is too passive.

But they start the second half with a completely different attitude and shorten them immediately (52 '): assist in the kiss by Maggiore and easy tap-in by Gyasi.

Immediate response of the guests with Mihaila: Provedel opposes (55 ').

At 72 'La Spezia definitely returns to the surface again with the Italian-Ghanaian Gyasi (brace), who scores on the fly on Green's cue.

The last assaults of the ducals were useless: without luck Gagliolo's attempt, at 91 'Provedel flies on Kucka's free-kick.

Still many, too many regrets for Parma (they haven't won in 15 games), whose hopes of salvation are thinning more and more.