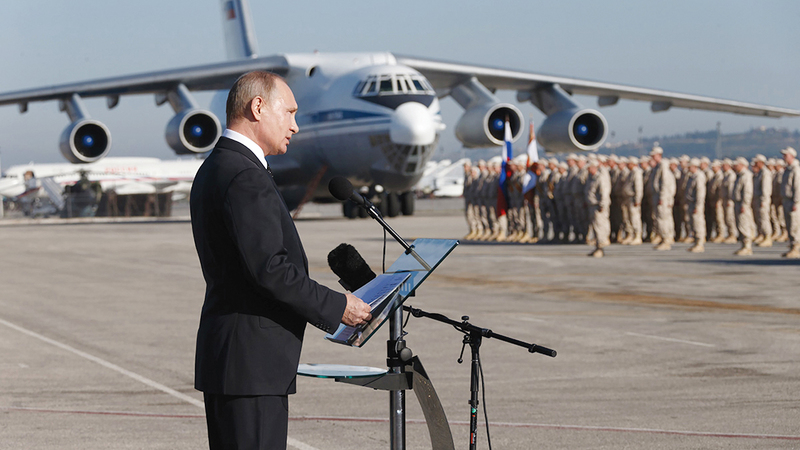 Putin speaks at the Hmeimim base in front of the Russian forces.

For more than half a century, the Kremlin has been dealing with the family of President Bashar al-Assad in Syria, and the beginning was with President Hafez al-Assad, and then with his son, the current President Bashar.

And no one doubts that Russian President Vladimir Putin is willing to provide assistance to President Bashar al-Assad until the end.

However, the relations between Presidents Putin and Assad do not fully explain the mysterious events that took place recently.

There is, for example, the rapid Russian expansion of the Russian military base in Hmeimim, in Latakia.

The Syrian government provided more lands to Russia last year, the base was expanded, and another runway was established suitable for receiving strategic bombers.

But who will need strategic bombers at a time when the civil war in Syria is at its quietest in a decade?

Another conundrum is that Putin helped broker a prisoner exchange between Syria and Israel.

Two shepherds were exchanged for an Israeli woman.

Putin's help came at a price, as Israel purchased 1.2 million doses of the Sputnik vaccine against the Coronavirus, for distribution in Syria.

And Putin appears to be magnifying his role in the Middle East as a powerful player, exploiting the gap created by the US withdrawal from the region.

The withdrawal of the United States from the region, and the Russian military intervention in 2015, tilted the balance of President al-Assad in the ongoing civil war in Syria.

Certainly, President Putin used to say to himself when he wakes up daily during a crisis in the Middle East, "What can Yevgeny Maximovich do in such a situation", and he meant Yevgeny Primakov, a clever Arabist who worked in the 1990s as head of Russian intelligence and foreign minister And as prime minister.

After the end of the Cold War, Primakov made it clear that the question before Russia is not whether or not to be part of Europe, but how it should work in order to counter US control.

This means forging pragmatic alliances that prevent the progress of the United States in a region that could be considered Russia's natural sphere of influence.

While Primakov was in power, Russia established itself as a large source of weapons, focusing on those states alarmed at the huge presence of Americans on Iraqi soil.

And once again Putin opens another page from his late mentor's book.

And his military support for President al-Assad has transformed him into a permanent presence in Syria, not just an air base and air control, but also a port on the warm waters of Tartus.

And when Syria becomes at peace, Russia will demand that it have a greater say in the eastern Mediterranean crises.

Moscow will present a major challenge to Turkey's ambition to be the dominant power in the Middle East.

Back in 2007, Putin sent Primakov to Damascus to see if there was room for peace in the Middle East led by Russia.

Assad has been conducting cautious negotiations with Israel over the Golan Heights.

These negotiations reached a dead end, and everyone, including the then French President Nicolas Sarkozy, believed that President Assad would turn into an ally of the West, not Russia.

But that did not happen either.

The idea of ​​Russia's hegemony over the Middle East still haunted Putin.

What if Iran is persuaded to withdraw from Syria, and in return Israel gives up the Golan Heights?

And if Primakov was still alive, he might have told Putin, "forget it," because there is no justification for Iran giving up a foothold in Syria, especially in the presence of the Iranian leader Ali Khamenei, and Israeli Prime Minister Benjamin Netanyahu will not withdraw from the Golan while he is about to hold elections. .

But Putin seems to have smelled an opportunity for peace, as evidenced by the meetings that his employees hold at the Hmeimim base.

But that will not be enough to make everyone hope to defuse all of the region’s crises. This is an opportunity, albeit unlikely, for the emergence of Putin as a peacebuilder in the Middle East.

Nobody doubts that Russian President Vladimir Putin is ready to provide assistance to Syrian President Bashar al-Assad until the end.