Gabriel's disease caused the fracture that the doctor suspected was assault

When nine-month-old Gabriel falls into the grass, he gets a fracture that leads to a report of suspicion of suspected child abuse. The family is allowed to live with a protective person in the home, around the clock for six weeks - before it turns out that the fracture is due to something completely different. In another case, a girl is being cared for for eight months, two-thirds of her life, before her parents are completely released from suspicion of shaking violence. 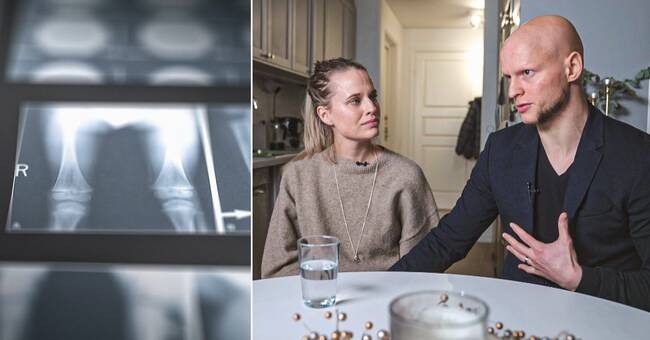 Assignment review has gone through several cases where parents are suspected of child abuse and then have the suspicions written off.

Jennifer and Simon's two young children were forcibly taken into care for six weeks, despite the doctors changing their perception of their son's injuries after only two weeks.

Another family that has been investigated for shaking violence is Sofie and Zourab, and their son Gabriel.

Sofie says that Gabriel had a difficult first year in life.

During his first months, several X-ray examinations are performed.

- Gabriel is very sad, he is dissatisfied, he sleeps very badly.

Something is not quite right.

We seek care quite a few times, she says.

When he is nine months old, he falls with his learn-to-walk cart in the grass.

Afterwards, he does not want to support himself on his feet, so Sofie and Zourab go to the children's clinic.

"Children can not have osteoporosis"

The doctor at the children's clinic examines Gabriel and says that they need to go for an X-ray.

- Then I ask him straight out: Can Gabriel suffer from osteoporosis?

He looks at me and just says that "children can not have osteoporosis", and that was it.

At the hospital, examinations are made which show that Gabriel has a femoral fracture and a report of concern is made about suspected child abuse.

Now the doctor says, according to Sofie, that there are two possible causes for the fracture.

- We were in shock, how can they believe this about us?

They do not know us very well, but these are not the people we are, says Zourab.

For six weeks, the family is allowed to live with a security guard at home, around the clock, when the investigation is ongoing.

Finally Gabriel gets his diagnosis.

This is not a case of abuse - the fracture is due to the osteoporosis disease OI.

- They were so determined that "we will establish our hypothesis".

And we noticed that, says Sofie.

The doctor notes "exposed to violence"

A third case concerns a family where the parents take their daughter on a booked three-month check-up.

What looks like a bruise causes the nurse to send them on to the hospital, to rule out any serious illness or allergy.

During the visit, the doctor immediately notes "exposed to violence".

Then examinations are made that are part of the so-called "triad" - a controversial method for diagnosing shaking violence.

- In the evening, two from the social services who worked on call came and told us that we had been reported for child abuse.

But please, we have kind of searched for our daughter's arm, we want to know what it is.

What if there is a disease, something serious, what happens?

Placed in an emergency home for eight months

The police arrest the parents at the hospital.

Their daughter is taken into care and placed in a day care center.

So-called CML fractures - small injuries in joints and growth zones, barely visible on X-rays - and bruises have been interpreted as signs of abuse.

But then the daughter gets a new fracture - in the emergency room.

More examinations are performed and alternative medical explanations for the injuries emerge.

After eight months, the parents are completely free and get their daughter back.

Then she is almost a year old and has lived two thirds of her life without her mother and father.

The healthcare manager has been given the opportunity to respond to all parents' criticisms, but does not want to comment on individual cases.