"Warned for a long time": why Ukraine and Poland urged Biden to stop Nord Stream 2

Polish Foreign Minister Zbigniew Rau and his Ukrainian counterpart Dmitry Kuleba appealed to US President Joe Biden to use all means to prevent the completion of the Nord Stream 2 gas pipeline. They wrote about this in a joint article for the American publication Politico. Kuleba and Rau note that Poland and Ukraine have long "warned about the danger" of the project for Europe. Experts believe that Warsaw and Kiev are calling on Biden to stop the implementation of Nord Stream 2, as they are afraid of losing revenue from pumping Russian gas to Europe. 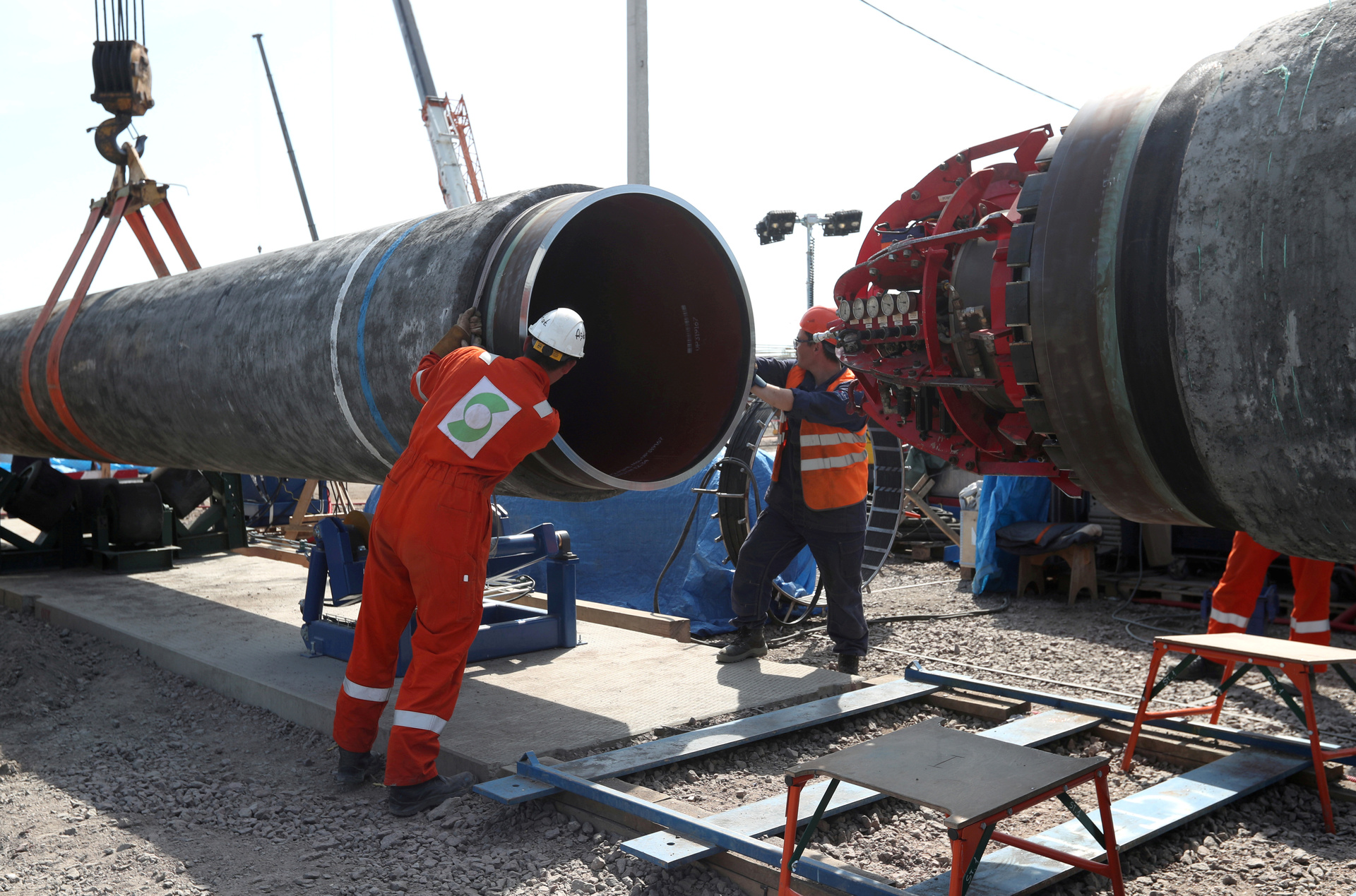 Polish Foreign Minister Zbigniew Rau and Ukrainian Foreign Minister Dmitry Kuleba published an article in the American edition of Politico, in which they called on US President Joe Biden to prevent the implementation of the Nord Stream 2 project by all available means.

Rau and Kuleba write that Kiev and Warsaw “have long warned about the dangers associated with the construction of Nord Stream 2”.

“The US Congress has heard our calls for vigilance and decisiveness: there they continued to insist on measures calculated against this dangerous, divisive project.

We call on US President Joe Biden by all means available to him to prevent the implementation of this project, ”the article says.

According to the foreign ministers of Poland and Ukraine, the United States should not listen to statements that the gas pipeline is almost completed and the project just needs to be completed.

“If it is successful, Russia will be able to try to convince the Ukrainian public that the West is indifferent to its own principles, as well as, ultimately, the security and prosperity of Ukraine,” Kuleba and Rau note.

The ministers also said they respect "Germany's right to express its point of view."

“However, at the same time, we are firmly convinced that such projects cannot be viewed only through the prism of bilateral relations - they should be viewed in the broader context of the interests and security of Europe as a whole,” they write.

Let us recall that Poland and Ukraine have consistently opposed the implementation of the Nord Stream 2 project.

The project consists of two lines of a gas pipeline with a length of over 1200 km each, with a total capacity of 55 billion cubic meters.

The authorities and officials of Poland and Ukraine have repeatedly made statements that Nord Stream 2 in one way or another threatens the security of Europe.

In February, this position was again voiced by Polish Prime Minister Mateusz Morawiecki.

He said that Nord Stream 2 is an anti-European project that undermines the EU's economy and security.

In turn, the head of the board of "Naftogaz" Andriy Kobolev said that stopping the construction of the gas pipeline is a matter of life and death for Ukrainian citizens.

In his Facebook, he wrote that while the transit of Russian gas to Western Europe passes through the territory of Ukraine, the country's gas transportation system is "part of the defense system."

Changing the geography of gas supplies will harm the state, Kobolev said.

“Then our country will become much more vulnerable to Russian aggression.

That is why stopping Nord Stream 2 is, without exaggeration, a matter of life or death for our citizens, "said the head of Naftogaz.

Political scientist and economist Alexander Dudchak noted in an interview with RT that Poland and Ukraine, publishing similar calls to Biden, want to attract the attention of the new US president, who has not yet taken any measures to prevent the completion of the construction of Nord Stream 2 ...

“Ukraine would like to preserve the transit of gas through its territory, while Poland, playing the role of the Eastern European state of the United States, wants to be the center for the re-export of American liquefied gas to the EU.

With such an appeal, Kiev and Warsaw want to attract the attention of the new administration of the White House, ”the political scientist explained.

In turn, the assertion that after the successful completion of the construction of the gas pipeline, Russia will allegedly try to convince the Ukrainians that they are indifferent to the West, demonstrates an inadequate assessment of the Ukrainian authorities of their place in the European hierarchy, Oleksandr Dudchak noted.

“It is in vain that Ukraine thinks that its prosperity and security is of concern to anyone.

Europe is primarily concerned about ensuring its own interests, although the leadership of many European countries looks back at the United States and is afraid to contradict their opinion, even contrary to their own interests, ”the expert stressed.

An attempt to politicize the construction of Nord Stream 2, an appeal to Biden and talks about the interests and security of Europe on the part of the foreign ministers of Poland and Ukraine demonstrate the concern of Kiev and Warsaw that the gas pipeline is almost completed, said the head of the department of international organizations and world political processes of the faculty World Politics Moscow State University Andrey Sidorov.

“The Nord Stream 2 project will be completed.

Another thing is that it may become the last Russian-European project in the medium term, since the United States will no longer allow other countries, including Russia, to develop their economic space, ”the expert noted in a commentary to RT.

According to experts, Ukraine and Poland had previously welcomed US steps against the construction of Nord Stream 2.

Analysts recalled that in 2019, under the Donald Trump administration, Washington imposed sanctions on the gas pipeline, after which the Swiss company Allseas was forced to stop laying.

Then, at the end of 2020, the US Senate approved the country's defense budget for 2021, which also included amendments on new sanctions on Nord Stream 2.

It is worth noting that the newly elected US President Joe Biden has not yet personally voiced his position on Nord Stream 2.

Nord Stream 2 is a bad deal because it causes a rift in Europe, subjects Ukraine and Central Europe to manipulation by Russia, and also because this project runs counter to the stated goals of Europe in the field of energy and security, "- leads White House spokesman Jen Psaki told Politico.

Bloomberg news agency reported on February 18 that the Biden administration will soon submit a report through Gosped on additional sanctions against the Russian gas pipeline.

However, on February 20, it became known that the US State Department did not offer new sanctions on Nord Stream 2 in its report to Congress.

Also, the US Foreign Office did not make proposals for action against any German or other European companies involved in the pipeline project.

American and German media have suggested that Biden is hesitating to impose sanctions on the gas pipeline Berlin needs to normalize relations with Germany that have been undermined by Trump's actions.

Let us remind you that Berlin does not agree with the US position on Nord Stream 2 - the German authorities are in favor of completing the gas pipeline and against unilateral extraterritorial sanctions from Washington.

The lack of new sanctions has been criticized by the Republican Party.

For example, Senator Jim Risch, who is the highest-ranking Republican on the international affairs committee, recalled that the US Congress “approved many legislative initiatives that received support from both parties, and specifically expanded the range of mandatory sanctions to cover the types of pipeline work. ongoing at the moment ”.

His position is shared by Rep. Michael McCall, who said that "the current sanctions mechanisms are completely inadequate."

“If this gas pipeline is allowed to be completed, then for Vladimir Putin it will be a real victory,” the congressman said.

Leading researcher at the Center for German Studies at the Institute of Europe of the Russian Academy of Sciences, Alexander Kamkin, commenting in an interview with RT on Washington's indecision, noted that Joe Biden wants to restore trust between the United States and its allies in the EU, which was under Barack Obama.

“We can say that Biden is determined to restore the previous American course that existed under Obama, therefore, on many issues, the US is dramatically changing its position, trying to remake what Trump has done,” the expert noted.

Perhaps Biden will not make harsh statements, expecting that Germany itself will meet halfway and, for the sake of strengthening German-American relations, will make concessions on Nord Stream 2, says Alexander Kamkin.

The appeal of the foreign ministers of Ukraine and Poland to Biden is motivated by fear of loss of income, Andrey Sidorov noted.

“After the commissioning of Nord Stream 2, Kiev and Warsaw are afraid of losing transit revenues, so they are trying to somehow correct the current situation and are turning to Biden to press Berlin and prevent the completion of the gas pipeline,” the political scientist said ...

At the same time, thanks to Nord Stream 2, Germany will become a pan-European energy hub and will increase its political weight, said Andrei Sidorov.

“At the same time, Ukraine and Poland will have to look for other items of income, and they are unlikely to succeed.

In many respects, it is for this reason that the Foreign Ministers of Poland and Ukraine published this letter, "the political scientist noted.