Why does Xi Jinping emphasize not forgetting the path of the past? 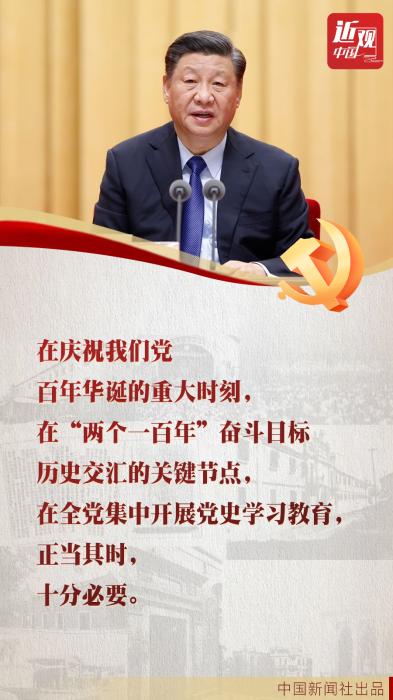 (A closer look at China) Why does Xi Jinping emphasize not forgetting the way of the past?

On February 20, the third day of the end of the Chinese New Year holiday, the Party History Study and Education Mobilization Conference was held in Beijing.

Xi Jinping regards history as the "best textbook" and has repeatedly emphasized that "No matter how far you go, you cannot forget the way you came."

From 1921 to 2021, the Communist Party of China created "the greatest political miracle on earth." At the moment of celebrating the centenary anniversary, why did Xi Jinping once again study the compulsory subject of party history?

First, if you want to know the great road, you must first make history.

At this party history study and education mobilization meeting, Xi Jinping pointed out that at the important moment of celebrating the centenary of our party, at the key node of the historical intersection of the "two centenary" struggle goals, it is legitimate to carry out party history study and education in the whole party. At that time, it is necessary.

Before this conference, on February 18, Xi Jinping wrote in a reply to the centenarian soldiers of the Shanghai New Fourth Army History Research Association: For the Chinese Communists, the history of the Chinese Revolution is the best textbook, often read. Often new.

Xi Jinping not only urged the whole party to learn history well, but also set foot on the "Red Holy Land" many times.

At the origin of the Chinese revolution, which is of great landmark significance, he especially emphasized that "this is the root of our party", "the entire history of our party is opened from the First National Congress of the Communist Party of China, and we cannot forget the time when we go further. road."

From the revolutionary site under the Pagoda Mountain in Yan'an to the revolutionary base in the depths of Taihang; from the departure point of the Red Army Long March assembly on the Yudu River to the Revolutionary Museum in the capital of the Soviet Union of Hubei, Henan and Anhui in the Dabie Mountains; from the Monument to the West Route Army in Gaotai, Gansu to Beijing The revolutionary memorial site of Xiangshan...where Xi Jinping's red footprints are, there is a series of journeys of the CCP's roots-knowing what has passed, where Fang Ming has gone.

Data map: Shanghai citizens took a group photo at the site of the First Congress of the Communist Party of China.

Second, don't forget your original intention, and you will always have.

What is the original intention?

In practice, the original aspiration is to "people first, life first" at all costs in fighting the epidemic. It is a visit to the poor in concentrated and contiguous areas of poverty in the country regardless of the heat and cold. It is the promise of "nothing less" on the road to a comprehensive well-off. ...

In September 2020, Xi Jinping went to Shazhou Village in Hunan for an inspection and made a special trip to visit Zhu Xiaohong, the grandson of Xu Jiexiu, the protagonist of the "Half Quilt" story on Long March Road.

He said that the Chinese Communists themselves have a quilt or half of them can be given to the people.

The party has not forgotten its original aspirations for nearly a century. The people regard the Communist Party as their own party and the people’s party.

"History has fully proved that the country is the people, and the people are the country. People's hearts are related to the life and death of the party. If you win the people's trust and get the people's support, the party can overcome any difficulties and be invincible." This time, the party history study and education mobilization At the conference, Xi Jinping discussed the relationship between the Communist Party and the people in this way.

Only when you don't forget your original intention can you move forward.

For the CCP, party history is not only a frequently read textbook, but also a nutrient for training party spirit and replenishing the calcium of the spirit.

"I have been to Xibaipo many times, and each time I came with a heart of reverence and walked with a lot of thinking. For us Communists, the history of the Chinese revolution is the best nutrient." In July 2013, Xi Jinping Hebei Province once said this when investigating and guiding the party's mass line education practice activities.

He pointed out, "If we repeatedly review our party's great history of leading the people in revolution, a lot of positive energy will be added to our hearts."

For the CCP, party history is also a sober agent for learning gains and losses, and knowing the rise and fall.

As Xi Jinping pointed out, “We look back at history, not to seek comfort from success, let alone to lie on our laurels, to find excuses for avoiding the difficulties and problems facing today, but to summarize historical experience, grasp the laws of history, and strengthen The courage and strength to forge ahead."

At the 2021 Spring Festival group visit, Xi Jinping pointed out: “We must carefully review the road we have taken, not forget the way we came, continue to walk the way forward, strengthen our ideals and beliefs, keep in mind the original mission, root the people, and always Stay vigorous and high-spirited."

This time, standing on the historical coordinates of the centenary anniversary, the CCP has carried out party history study and education throughout the party, all seeking experience from history, seeking laws from history, and exploring the future from history—learning from the past, knowing the past, and carrying forward the past.

Hundred years have been ups and downs, and a century has been flourishing.

So some people say: Looking back at history, we can understand that the best learning and reference to history is to become a wave in the tide of history.

The answer lies in history and the future on how the CCP will take the Long March in the new era.