On Sunday, the Central Bank of Sudan issued instructions to banks to unify the official and parallel exchange rate, leaving the banks to set the rate they deem appropriate, and the Sudanese received the decision with a mixture of fear and anxiety. 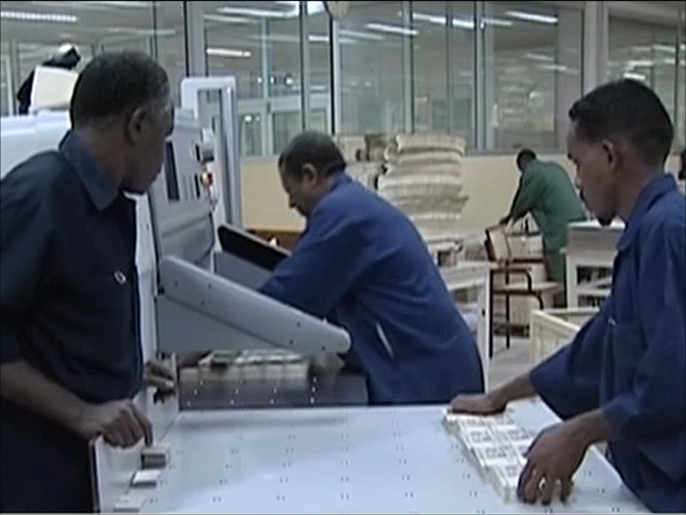 With a mixture of fear and anxiety, the Sudanese were greeted by the government's sudden decision to make adjustments to the official exchange rate of the pound against foreign currencies.

The government has moved in an attempt to besiege many of the crises that have afflicted the Sudanese economy over the years, on top of which is the presence of more than one currency price which led to its collapse, in addition to its inability to obtain support from international institutions in light of the depreciation of the Sudanese pound.

Today, Sunday, the Central Bank of Sudan issued instructions to banks to unify the official and parallel exchange rate, leaving the banks to set the rate they deem appropriate and to abandon the official indicative rate that prevailed until Saturday by 55 pounds to the dollar.

As soon as the circular was issued by the Central Bank, banks and banks rushed to switch their plates by announcing new prices of 375 pounds to buy one dollar and 393 pounds to sell it against 451 pounds to buy the euro and 474 pounds to sell it, and accordingly the rest of the currencies rose in varying ways.

The figures officially announced in banks were surprising to dealers in financial circles in the parallel market, as they were raised higher than the numbers in circulation with them by a not large increase, but it created a state of confusion for a few hours, after which the parallel market traders tried to regain control and began to announce increases to cope with the new situation.

Government officials, who appeared in a press conference at midday on Saturday, avoided introducing the term "float" to the new measures, agreeing that they are "liberalizing the exchange rate" and "an absolute necessity to reform the economic track."

Floating currency is making its exchange rate fully liberalized, and the government or the central bank does not interfere in determining it directly, leaving it to the supply and demand mechanism that allows setting the exchange rate of the national currency against foreign currencies.

The Central Bank of Sudan says that the new policies will unify and stabilize the exchange rate, transfer resources from the parallel market to the official market, attract remittances from the Sudanese working abroad and inflows of foreign investment, and also contribute to the normalization of relations with regional and international financing institutions and friendly countries in a manner that ensures attracting flows of grants and loans and stimulating producers. And exporters and the private sector and reduce smuggling of goods and currencies.

The Central Bank also hopes to implement these policies to bridge the gaps to prevent speculators from benefiting from a gap between the official price and the price in the parallel market, and to help work on exempting Sudan's external debt by taking advantage of the Heavily Indebted Poor Countries (HIPC) initiative.

Fears of worsening the situation

Nevertheless, the decision, taken in light of a difficult economic situation, raises the fears of the Sudanese from the large and suffocating effects reflected in the insane rise in the prices of goods and services.

Social media was buzzing with the expression of many concerns and analyzes, and the government also acknowledged the significant negative effects that these measures would have, and talked about possible remedies to alleviate them.

The economic expert and head of the Economic Committee of the Alliance of the Forces of Freedom and Change - the ruling coalition - which has been opposing the government's policies, says that the latter has not revealed any precautions for taking the decision, and that there is insistence on yielding to the requests of the World Bank according to the monitoring program, as the monitoring team is expected to visit the World Bank. Khartoum, at the beginning of next March, will submit its report to the Executive Management, pointing out that the government had implemented the other conditions by lifting subsidies on fuel and electricity, and that it is currently deciding to liberalize the exchange rate in response to that recipe.

Abdul-Ghani explains to Al-Jazeera Net that what has been implemented is "partial controlled liberalization," which is the same as what the previous government called the "flexible managed exchange rate" without succeeding in achieving a result when it set 47 pounds to the dollar as an official exchange rate, but the parallel market at that time put up 52 Pounds.

He added, "This is a leap in the unknown and overrides the budget, and undermines all its positive aspects, such as achieving 1% growth, knowing that growth will now shrink to -4%, in addition to that plans to reduce inflation to 95% cannot be achieved."

The expert believes that the most dangerous aspect of these policies is the significant rise that will extend to the prices of domestic and imported goods to record levels, which means an increase in both quantity and quality of poverty, and large sectors will enter the circle of poverty, as well as increased unemployment and a decrease in customs and tax revenues with an increase in tax evasion.

It will not change anything

In turn, financial expert Haitham Fathi says that the decision to liberalize the currency in practice "will not change the reality of the scarcity of foreign currencies, nor will it change anything for banks, because foreign currencies will only be available in the parallel market, and the exchange rate fixing system is a policy that developing countries can follow. For a while, with the aim of attracting capital and creating confidence, but this policy that has continued since 2011 has led to the inflation of the public sector, increased public spending, and put monetary policy in the service of fiscal policy.

Before starting to float the exchange rate, Fathi told Al-Jazeera Net, the government should have put in place a clear plan, starting with a road map, then negotiating with the International Monetary Fund, along with a safety net for the poor classes.

He also stresses that the confidence factor is very necessary so that the float does not lead to the exit of money from the country.

In a post on Facebook, former Finance Minister Ibrahim Al-Badawi congratulated the government for taking the decision to unify the exchange rate while warning of repercussions, which he said should be taken into account. The “floating” exchange rate system, as he explains, is the best option available to rebalance the national currency and reduce the structural deficit in the current account. Unifying the exchange rate and eliminating the parallel market for foreign exchange in light of the scarcity of reserves available to the Central Bank.

Al-Badawi warns that the float may carry with it the risks of the free fall of the exchange rate and explosive inflation if it is not supported by fulfilling two basic conditions: The first is to prevent the financing of expenditures and the budget deficit in general through borrowing from the Bank of Sudan in a random and unprogrammed manner, and this requires reducing the budget deficit to the maximum Limit as well as providing non-inflationary financing channels to manage liquidity.

The second is for the state to turn into a net seller of foreign exchange to finance imports of strategic goods by the private sector.

He confirms that these two conditions are very important to the success of the flotation according to theoretical models of the exchange rate economy and the experiences of countries that have succeeded in similar economic reform programs.