A major event in the party's political life has come! Xi Jinping mobilized and deployed like this

Current News Eyes丨A major event in the party's political life is coming! Xi Jinping mobilized and deployed like this   On February 1, when Xi Jinping was welcoming the New Year with non-Party people, he talked about a major event: The Central Committee of the Communist Party of China decided to launch a study and education of the history of the Communist Party in the whole party this year. On 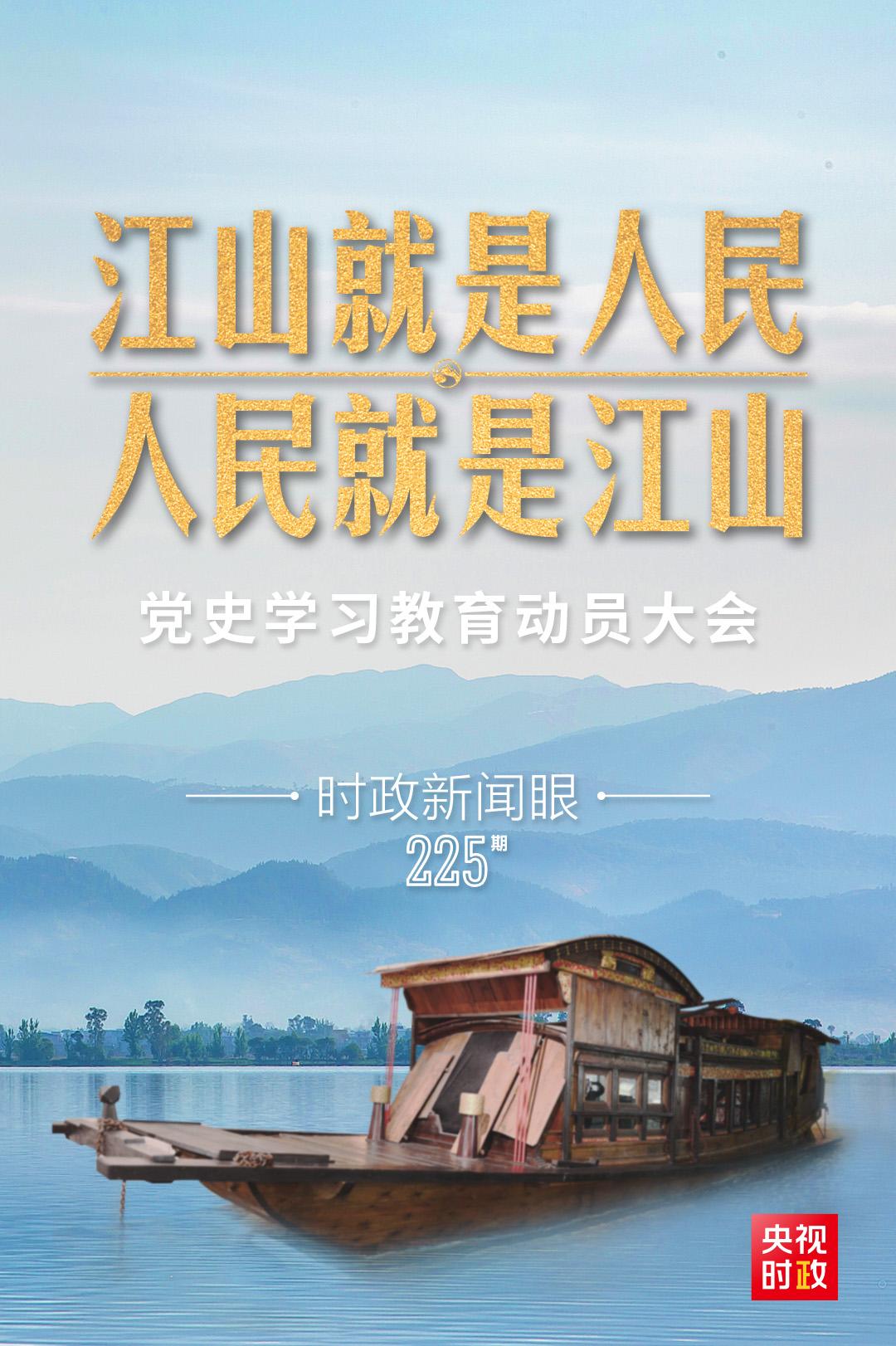 On February 20th, on the ninth day of the first month of the ox year of the lunar calendar, the Party History Study and Education Mobilization Conference was held in Beijing. At the meeting, the general secretary emphasized that learning party history, understanding ideas, doing practical work, and opening new bureaus will welcome the 100th anniversary of the founding of the party with excellent results .

Party history learning and education, why, what, and how?

"Current Affairs News Eye" for you to interpret.

"At the right time, it is necessary"

At the mobilization meeting, Xi Jinping said that at the important moment of celebrating the centenary of our party, at the key node of the historical intersection of the "two centenary" struggles, it is very necessary to conduct party history study and education throughout the party. .

History learns from history and seizes the opportunity to engage in education. The significance is extraordinary.

In May 2019, the General Secretary stated at the “Don’t Forget Your Original Heart, Keep Your Mission in Mind” themed education work conference: “This year marks the 70th anniversary of the founding of the People’s Republic of China, and also the 70th year of our party’s ruling nationwide. This theme education is at the right time."

△In October 1939, the Communist Party's early party publication of the CPC Central Committee was launched. Mao Zedong wrote and published a statement, proposing that party building is a "great project."

Since the 18th National Congress of the Communist Party of China, from the party’s mass line education and practice activities to the "three stricts and three realities" special education, from the "two studies and one doing" study and education to the "not forgetting the original intention and keeping in mind the mission" theme education, to This time the party history study and education, the party's centralized education continued to be carried out, and each time it was "calcium supplement" and "fuel".

At the mobilization meeting on the 20th, Xi Jinping pointed out that the development of party history learning and education throughout the party is a major decision made by the party Central Committee. All party comrades must learn history wisely, learn history to increase credit, learn history, honor morality, and practice history.

In his speech, the general secretary said that the Party Central Committee has issued the "Notice on Carrying out Party History Study and Education in the Whole Party" and made arrangements for this work.

Party members and cadres, no matter what level and position they are in, must devote themselves to learning, thinking, learning, and learning.

History is the best textbook.

The history of the Chinese Communist Party is the most epic chapter in Chinese history since modern times.

history in learning the present from history, and in educating people

During the visit to Guizhou earlier this month, the general secretary mentioned the Zunyi meeting, which was very meaningful.

He said that the distinctive feature of the Zunyi Conference is to uphold the truth, correct mistakes, establish the correct leadership of the Party Central Committee, and creatively formulate and implement strategic strategies in line with the characteristics of the Chinese revolution.

This is still very important today.

At that time, the general secretary emphasized that it is necessary to combine the upcoming party history study and education, to deeply understand the original intention and mission of the Communists from the spirit of the Long March and the spirit of the Zunyi Conference, and to take the long march of the new era.

△Zunyi Conference Exhibition Hall, the combination of three-dimensional bronze sculptures of 20 attendees and background reliefs forms a visual atmosphere of advancing to the past and marching toward victory.

At the mobilization meeting on the 20th, the general secretary pointed out that it is necessary to educate and guide the whole party to establish a great historical view, analyze the evolution mechanism from the long history, the tide of the times, and the global situation, explore the laws of history, propose corresponding strategies and strategies, and strengthen the work system Sexuality, predictability, and creativity.

He emphasized that in order to better deal with the various foreseeable and unforeseen risks and challenges on the road ahead, we must obtain enlightenment from history and extract the magic weapon for defeating the enemy from historical experience.

△From 1935 to 1948, Yan'an was the seat of the Central Committee of the Communist Party of China.

The nine-story pagoda on Pagoda Mountain, which was built in the Tang Dynasty, has witnessed the history of the Chinese revolution from hardship to victory.

The Gengzi Year that has just passed has once again proved a truth: the closer to the national rejuvenation, the less smooth sailing, the more risks, challenges, and even stormy seas.

The Chinese Communists in the new era have created a very unusual brilliance in this very unusual year, and wrote a moving new chapter in a century of party history.

Learn from the past and know those who come.

General Secretary Xi Jinping said at the party history study and education mobilization meeting that it is necessary to grasp the important node of the party's 100th anniversary, summarize and use the party's rich experience in successfully coping with risks and challenges in different historical periods, and do a good job of responding to changes in the external environment for a long time. Preparation and work preparation.

On the eve of the Party History Study and Education Mobilization Conference, General Secretary Xi Jinping responded to two letters, both of which are inseparable from this study and education.

One is for all party members in Beizhuang Village, Xibaipo Town, Pingshan County, Hebei Province, where the famous song "Unity is Strength" was first performed.

Xi Jinping said: "The 100-year history of the Communist Party of China is a history of uniting and leading the people to fight for a better life. The cadres and the masses of Xibaipo have a deeper understanding of this."

△ From March 5 to 13, 1949, the Second Plenary Session of the Seventh Central Committee of the Communist Party of China was held in Xibaipo, Pingshan County, Hebei.

This is the General Assembly hall.

The other letter was sent back to the centenary soldiers of the Shanghai New Fourth Army History Research Association.

The general secretary said in the letter: "You have personally experienced the historical process of the Chinese nation ushering in a great leap from standing up, getting rich to becoming strong, and you understand the original intention and mission of our party."

A deeper experience and understanding comes from the vivid party history close by.

At the mobilization meeting on the 20th, General Secretary Xi Jinping said that it is necessary to promote the study and education of party history among the masses, the grassroots, and the hearts of the people.

△On February 18th, General Secretary Xi Jinping wrote back to the centenarian soldiers of the Shanghai New Fourth Army History Research Association, expressing his appreciation for their concern for party history propaganda and education during their dying years.

Shi Ping, a veteran of the New Fourth Army, is one of more than 40 letters.

In his speech, the general secretary emphasized that it is necessary to educate and guide the whole party to understand how Marxism profoundly changed China and the world from the extraordinary course of the party.

It is necessary to educate and guide the whole party to vigorously carry forward the red tradition, inherit the red gene, and maintain the spiritual blood of the Communists.

It is necessary to educate and guide the whole party to learn both positive and negative historical experience from party history.

It is necessary to establish a correct view of party history, and better rectify the roots and strengthen the roots.

At the mobilization meeting on the 20th, General Secretary Xi Jinping pointed out that the 100-year history of our party is a history of fulfilling the original mission of the party, a history of the party and the people connecting hearts, breathing together, and sharing destiny.

support is related to the life and death of the party

The general secretary emphasized that it is necessary to educate and guide the whole party to deeply understand the nature and purpose of the party, and insist on doing everything for the people and relying on the people in everything.

An important goal of the previous education on the theme of "not forgetting the original intention and keeping in mind the mission" was to serve the people and solve problems.

In May 2019, Xi Jinping emphasized at the thematic education work conference that it is necessary to focus on solving the people's worries and troubles, and win the trust of the people for the actual results of working for the people and doing their responsibilities for the people.

△Celebrating the centenary of the founding of the party, books on party history are selling well.

This is the recently published "Questions and Answers on the History of the Communist Party of China".

At this mobilization meeting for the study and education of party history, Xi Jinping once again emphasized the need

to effectively solve problems for the masses

It is necessary to combine the study of party history with summing up experience, observing reality, and promoting work, as well as solving practical problems, carry out "I do practical things for the masses" practical activities, and transform the learning effects into work motivation and effectiveness, and prevent learning and work "Two skins".

The theme education of "Don't forget the original aspiration and keep in mind the mission" puts the opposition to formalism and bureaucracy as outstanding requirements, and combines it with the implementation of the requirements of the "Grassroots Burden Reduction Year".

At this year's mobilization meeting, the general secretary once again demanded to resolutely overcome formalism and bureaucracy and pay attention to reducing the burden on the grassroots.

△The Memorial Hall of the Battle of Crossing the River, in August 2020, the general secretary visited here.

On February 11 this year, General Secretary Xi Jinping said at the Spring Festival group visit: "We must carefully review the road we have traveled, and we must not forget the way we came, and continue to walk the path forward." With great achievements in mind, it is a century of glory. .