The seductive performance of Erika Vikman and Antti Tuisku attracted attention in the New Music competition. 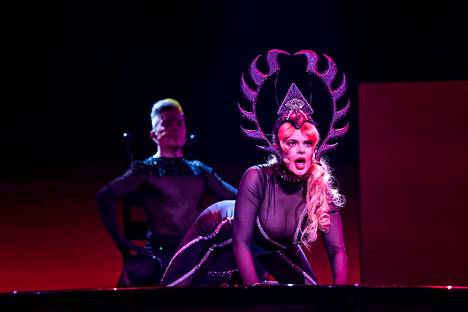 Dressed in black, glittery and semi-transparent full-body outfits, Vikman and Tuisku started the show from a high table.

Lying on the table, Vikman started the show with his hit The Table of Sinners.

A very impressive and high main decoration was seen at Vikman's head throughout the performance.

The song continued with Tuisku's hit The Beast is off.

During the chorus of his hit Cicciolina, for example, Vikman burst into a showy spaghetti in the middle of the stage.

Tuisku was also seen kneeling in front of Vikman embracing his thigh.

UMK is a familiar competition for Vikman, as he competed for the Finnish Eurovision Song Contest last year, finishing second in his song Cicciolina.

Antti Tuisku, on the other hand, ran the New Music Competition for the first time this year.

The UMK final will be shown live on Yle TV1 and Yle Areena from 9 pm.

Ilta-Sanomat follows the New Music competition throughout the evening.