US President Joe Biden has said he will agree to declare Texas a disaster zone, paving the way for more aid in a fierce winter storm, as he contemplates a visit to find out what federal aid the state needs. 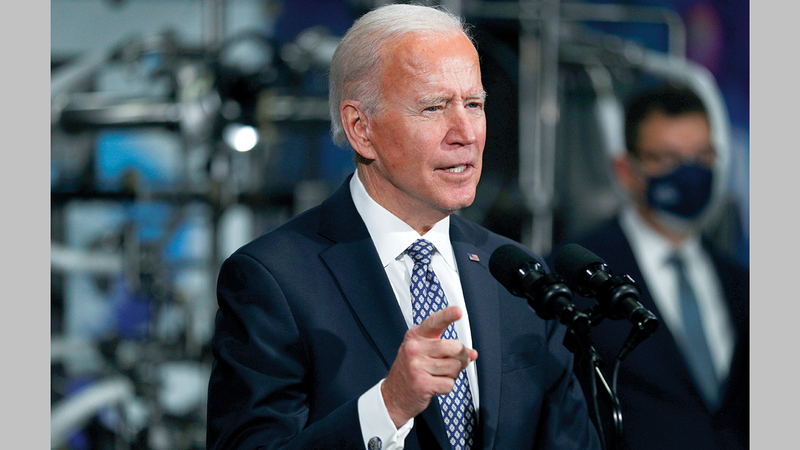 Texas represents Biden's first crisis and a test of his pledge to be president of all Americans.

US President Joe Biden said he would agree to declare Texas a disaster zone, paving the way for more aid in a severe winter storm, as he contemplates a visit to find out what federal aid the state needs.

Millions of people in Texas, the largest producer of oil and gas in the United States, faced power cuts, and nearly half of Texas's residents suffered water cuts yesterday.

About 20 deaths were attributed to the storm and hail wave.

Biden's first crisis, who took office a month ago, is a test of his pledge to govern, as well, on behalf of the Americans who opposed his candidacy.

The White House is now working closely with Texas Republican Gov. Greg Abbott, who did not initially acknowledge Biden winning the election in November.

"As I said when I ran, I will be president of all Americans," said Biden, who lost in Texas to Trump.

Biden’s visit to Texas is being planned this week.

On the other hand, Democratic Senator Joe Manchen announced that he would oppose installing Nira Tanden, who was chosen by President Joe Biden to head the Office of Administration and Budget, which is a blow to her chances of taking office.

Tanden, the first woman of Indian descent to be selected for the position, has faced bipartisan criticism since Biden announced her candidacy in November.

Although she faces condemnation from Republicans for her harsh tweets on "Twitter", she has also faced criticism from the progressive wing of the Democratic Party.

"I think her exaggerated partisan rhetoric will have toxic and negative repercussions on the important working relationship between members of Congress and the incoming director of the Bureau of Management and Budget," said the moderate Democrat Manchen.

He added, "For this reason, I cannot support her appointment."

The Office of Management and Budget is an influential body, responsible for developing the president's budget, and evaluating the projects and expenditures of his ministers.

The Democrats have a slim majority in the Senate, which has the power to confirm or reject the presidential candidates, as they control 50 seats to 50 for the Republicans, while they can count on the vote of Vice President Kamala Harris.

But by opposing her appointment, Tanden will likely need at least one Republican vote to be confirmed, which she is unlikely to get.

On the other hand, the US Department of Justice indicted six members of the militant group, the Guardians of the Department, for their participation in the January 6 attack, which was carried out by Trump supporters on the Capitol headquarters.

Similar accusations have already been brought against three other people, affiliated with "Authentic Keepers".

The nine members were charged with conspiracy to obstruct official government procedures, destroy federal property, and enter illegally into a federal building.

On the other hand, a first group of 25 asylum seekers crossed the US border yesterday, within the framework of broad reforms in the field of immigration, announced by US President Joe Biden, while thousands are still waiting in Mexico in the hope of catching them.

The group crossed the border on a bus from Tijuana, accompanied by representatives of the United Nations High Commissioner for Refugees, according to an AFP journalist.

Later, an official at a shelter in San Diego, who asked not to be named, confirmed that the group arrived at a hotel in the city, knowing that its final destination was unknown.

Under the immigration program implemented by the administration of former President Donald Trump, known as "Stay in Mexico," tens of thousands of non-Mexican immigrants, most of them from Central America, were returned across the border pending the processing of their requests.

But the Biden administration quickly canceled the controversial program, known officially as the "Immigration Protection Protocol," and the first stages began Friday.

• A first batch of asylum seekers crossed the Mexican-American border as part of the Biden reforms.