[The Chinese Communist Party’s "One Hundred Thousand Whys"] Why is it spread online that the national flag of Tiananmen Square only rose to 28.3 meters?

China News Service, Beijing, February 20 (Guo Chaokai) How high will the national flag of Tiananmen Square rise? Although most people know that the Tiananmen five-star red flag rises at sunrise and falls at sunset, there are different opinions on the Internet about the height of the flag. Data map: On the morning of January 1, a grand flag-raising ceremony was held at Tiananmen Square in Beiji 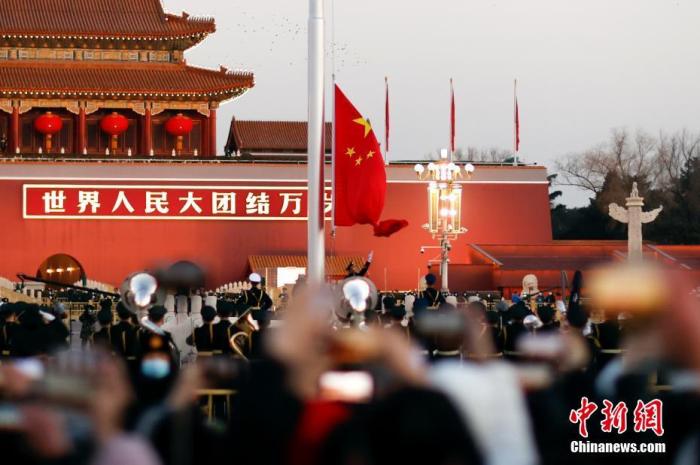 Although most people know that the Tiananmen five-star red flag rises at sunrise and falls at sunset, there are different opinions on the Internet about the height of the flag.

Data map: On the morning of January 1, a grand flag-raising ceremony was held at Tiananmen Square in Beijing.

Today, when searching for relevant keywords on the Internet, the statement that "the national flag of Tiananmen Square only rises to 28.3 meters" can be described as "overwhelming."

As for why the figure of 28.3 meters is required, some articles have a clear explanation, claiming that this is because the Chinese Communist Party was founded in July 1921, and the new China was founded in October 1949, a difference of 28 years and 3 months. .

To commemorate the arduous journey from the founding of the Communist Party of China to the founding of New China, the national flag on Tiananmen Square only rose to 28.3 meters.

Although this number has a special meaning, it is not the case.

In other words, the national flag should be raised to 30 meters instead of 28.3 meters transmitted online.

In response to related claims, Zhao Xinfeng, the former head of the national flag team at Tiananmen Square, previously wrote an article to correct this false claim.

He pointed out that since the opening of the 30-meter-high Tiananmen Square flag pole in 1991, the normal flag-raising height is 30 meters, and there is no such thing as 28.3 meters.

Looking back in history, the flag pole in Tiananmen Square has only been replaced once since the founding of New China.

This old flagpole was not decommissioned until 1991, and it has been in use for 42 years.

The flag pole was replaced in Tiananmen Square in 1991. The new flag pole, including the underground part, is 32.6 meters in total and has a clear height of 30 meters.

The replacement of the flagpole was mainly based on two considerations. One is that the 22.5-meter-high flagpole that has been used for 42 years is indeed a little aging; the other is that the space of Tiananmen Square and Chang'an Avenue has undergone tremendous changes. The height of the 22.5-meter flagpole is obviously low, which does not match the square space. .

Since 1991, the five-star red flag in Tiananmen Square has been raised to a height of 30 meters.

Tiananmen Square has always been known as the "heart" of the motherland, and its flag raising and lowering ceremony has strict standards and regulations.

Although the claim of 28.3 meters is misinformed on the Internet, the widely circulated interpretation version also reflects people's deep memory of 28 years of hard struggle.

While people pay attention to the height of the national flag, they also place their respect and affection for the party to the country and the nation.