“Since then, the world has stood still around us”: Commemoration in Hanau

On February 19, 2020, nine people in Hanau lost their lives to the racially motivated attack in just five minutes and six seconds. Even a year later, the question of how this could happen does not let go of her relatives. 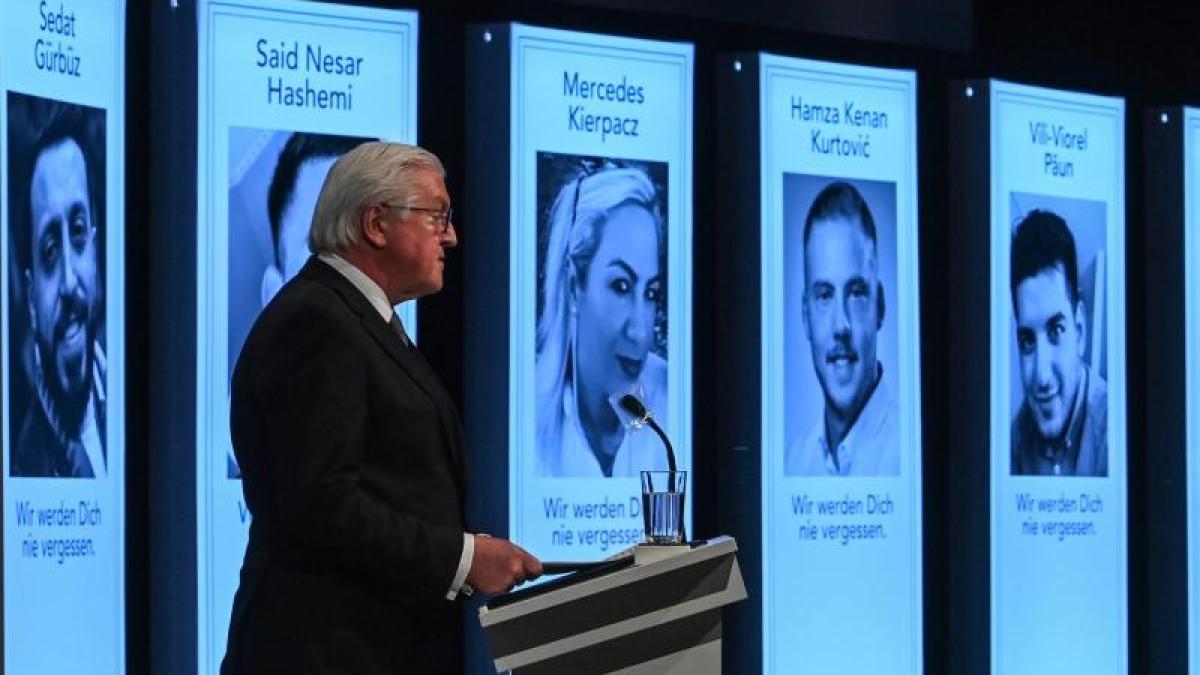 Hanau (dpa) - grief and pain, but also disappointment and bitterness - one year after the racially motivated attack in Hanau, the bereaved are marked by their heavy loss.

«Since then the world has stood still around us.

Nothing is like it used to be, ”said Armin Kurtović, whose son Hamza was killed on February 19 a year ago, on Friday evening at a moving memorial event in Hanau.

Day after day he was concerned with the question of how it could come to this and why the act could not be prevented.

That must be fully explained - but there is no will to do so.

"We have been trying to find answers to our questions ourselves for a year, as we are not heard by the responsible authorities and are repeatedly rejected," said Kurtović.

Steinmeier stood behind the relatives' demand for clarification of all open questions.

At the same time he called on citizens to stand together against hatred, racism and agitation.

“Clarification and processing are not at your own discretion.

They are the responsibility of the state to the public and above all to the relatives, "said the Federal President.

He knows that there has been criticism and questions about state action and that there are still others.

The state and those who bear responsibility in it are not infallible either.

Steinmeier said that where there were errors or incorrect assessments must be clarified.

«Only to the extent that this obligation is removed and answers to open questions are given, can lost trust grow again.

That is why we have to try so hard.

The state is challenged. "

One year after the attack, by no means had the grief gone, the pain subsided, the anger gone, and all questions answered.

“But as Federal President I stand here and ask us: Do not allow the evil act to divide us!

Let us not overlook the evil spirits in our midst - hatred, marginalization, indifference.

The Federal President invited the survivors of the victims to Bellevue Palace last September and held talks with them.

Immediately before the memorial event, he had written a personal letter to the families.

In his speech he told them: "I am here because I am deeply depressed that our state has not been able to keep its promise of protection, security and freedom that it gives to all who live here peacefully to their relatives."

Like the murder of the Kassel District President Walter Lübcke and the attack on the synagogue in Halle, the murders in Hanau were no accident either.

"The acts were initiated by targeted hatred, the perpetrators were encouraged," said Steinmeier.

«The vicious misanthropy that shows up online or elsewhere is the dangerous poison of a small minority - but a poison that has an effect.

That repeatedly leads people to believe that they are allowed to humiliate, threaten, hunt or even murder other people in the name of an alleged popular will. "

Lübcke's family conveyed their condolences to the relatives of the Hanau victims on Friday.

Not only does it remain pain, but there are also many urgent questions, she explained and wished the relatives that they would be answered soon.

“It won't bring back your daughters and sons, siblings, friends.

It won't undo the act.

But it can help to deal with the great pain and the deep loss and give strength to continue to stand for our values. "

The 43-year-old German Tobias R. shot nine people with foreign roots in several places in the city in the Rhine-Main area on the evening of February 19, 2020, before allegedly killing his mother and then himself. He had pamphlets beforehand and videos of conspiracy theories and racist views posted on the Internet.

The act had caused horror in Germany.

The "February 19th Hanau Initiative", an association of Hanau family members, speaks of a "failure of the authorities before, during and after the crime".

Relatives of the victims had repeatedly asked for clarification, for example on the question of why the delusional perpetrator was allowed to own weapons.

The former national soccer striker Rudi Völler opened the memorial event in the evening with a quote from Wilhelm Grimm: “Hate, which soon outstrips all other feelings, destroys more than anything else the calm and prosperous life of a state that is based on the inner attitudes of the people is based, not on bayonets, ”wrote the famous collector of fairy tales, who was born in Hanau like his brother Jacob.

Images of the dead could be seen on steles that were gradually illuminated.

Even before the official memorial event, around 500 relatives and citizens of Hanau had come together in the main cemetery for a prayer that morning.

They gathered at an ensemble of honorary graves where Ferhat Unvar, Hamza Kurtović and Said Nesar Hashemi are buried.

The ensemble also includes memorial stones for the other six victims.

Various religious communities and groups commemorated the murdered with demonstrations and the laying of wreaths.