The couple of 'voyeurs' from Malaga who hid cameras in air fresheners: 71,000 videos of women

An error in the placement of one of the cameras allowed capturing part of his uniform. A very characteristic dress that was the starting point that facilitated the investigators 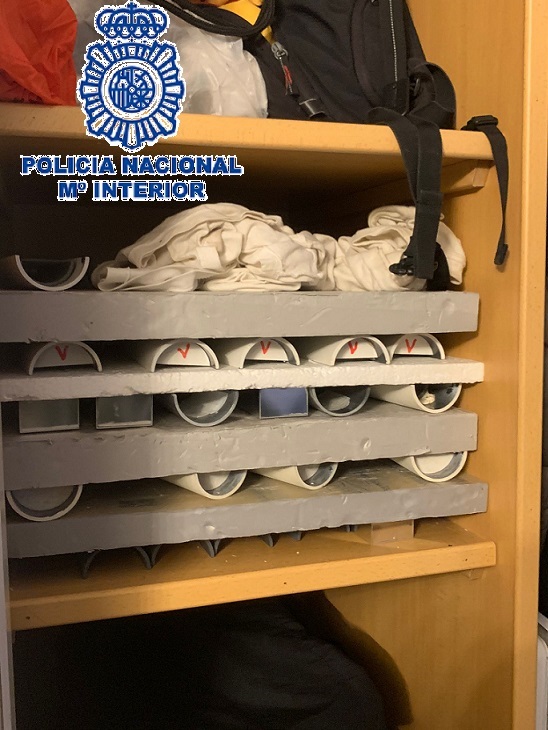 An error in the placement of one of the cameras allowed capturing part of his uniform.

A very characteristic dress that was the starting point that made it easier for the researchers to reconstruct their steps.

How he walked through the mall until he met his accomplice and left the building on the way to a vehicle whose license plate expired their identities.

Then, the arrests and a couple of house searches that showed the true magnitude of the case: more than 71,000 files with images of victims,

that were activated with motion sensors,

and a total of 84 concealment devices for passing them off as air fresheners.

of a couple of

who installed recording systems in bathrooms to obtain videos of naked women.

Recordings whose final destination would be their commercialization on websites and from which several lines of police work that are in an embryonic stage have emerged.

Sources close to the case consulted by EL MUNDO have explained that the investigations started after the complaint filed by those responsible for a shopping center in the Malaga capital who noticed the installation of their bathrooms by a large number of air fresheners that had not been placed by their staff, as they weren't the usual brand they worked with.

The agents located five devices and found that recording circuits composed of a micro-camera, an SD memory card in which the images were stored, and a motion detector that activated recording when the woman - of any age - were hidden inside. it went into individual toilets, which greatly increased the life of the battery that powered the system.

Those arrested are a 44-year-old man and his 31-year-old niece, both of Spanish nationality and without prior records, whose roles were well defined.

He was supposedly in charge of configuring the recording circuits and hiding them in the air fresheners, while she, taking advantage of her feminine condition, went into the bathrooms and placed them without attracting attention.

Image of the location of the cameras THE WORLD

They only worked in women's toilets, and now it is a matter of determining what the final objective of the images was, although taking into account the 71,080 files intervened at the moment -more storage systems remain to be analyzed-, although the main hypothesis is that they were profitable with its diffusion.

This newspaper has learned that, in addition to this shopping center, researchers have identified five more sites where they placed cameras: three fast food establishments and two study centers.

Among the various unknowns that the police are trying to solve are how long they had been acting, which can be approximated by analyzing the videos, and the total number of victims.

On this last question, a superficial study of the abundant material seized reveals that there would be hundreds and hundreds.

This line of investigation is what allowed the identification of those now arrested, as the agents discovered images of the young woman on one of the memory cards when she placed one of the cameras.

In them, his work uniform was captured, which made it possible - thanks to the security system cameras - to reconstruct his journey through the different galleries of the large area and capture the moment in which he met with the man.

The full identification of both was achieved thanks to the license plate of the vehicle in which they left and which was in his name, sources of all solvency indicated.

The 71,080 videos of women in public toilets were located in the searches made in the homes of both investigated.

They were classified by categories according to the physical characteristics of the victims.

1,187 videos were also found in which the detainee is observed having sexual relations with various women, it is unknown, to date, if they were recorded with their authorization.

Detail of the location of the cameras EL MUNDO

The Provincial Police Station of Malaga has reported that, based on the procedures carried out, the detainee would dedicate himself to storing thousands of videos of women and minors, with the alleged intention of publishing them on an internet page and obtaining financial benefits.

The investigation is still open

The investigation remains open, pending the analysis of the huge number of files seized in the homes of those investigated, which will be carried out by police specialized in the matter.

Likewise, the efforts to identify and locate possible victims continue.

The implication of other people in the investigated events is not ruled out.

Málaga: Prison for the gang of security guards that attacked luxury homes on the Costa del Sol