China News Service, February 18, reported that the United States has recently been hit by extremely cold weather. The temperature in many places has hit a record low in recent years, and at least 31 people have died. Among them, Texas was the most severely affected. The blizzard paralyzed the power grid in the severe cold and caused long-term power outages in the homes of about 4 million residen 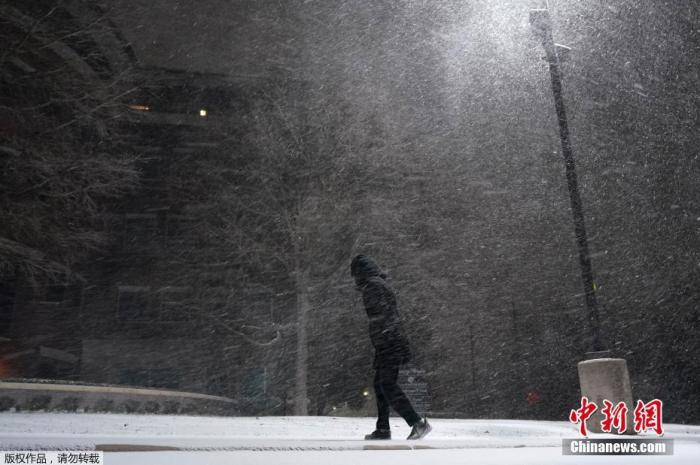 China News Service, February 18, reported that the United States has recently been hit by extremely cold weather. The temperature in many places has hit a record low in recent years, and at least 31 people have died.

Among them, Texas was the most severely affected. The blizzard paralyzed the power grid in the severe cold and caused long-term power outages in the homes of about 4 million residents.

When US President Biden arrived in Wisconsin on the 16th, he described it as "cold like a devil."

However, according to the US National Weather Service, the next blizzard will hit again, and it will affect the southern, midwest and northeastern states of the United States in the next two days.

On February 15, local time, Texas was hit by a winter storm, and temperatures throughout the state were below zero degrees Celsius.

The picture shows a pedestrian walking in a snowstorm.

The National Weather Service said that over the past weekend, the Arctic super cold air swept the United States.

Seven states, including Texas, Louisiana, and Kentucky, have the worst situation.

The temperature in Houston, Texas and other places is even lower than that in Alaska, which is close to the Arctic Circle. Outdoor temperatures in parts of Dallas have dropped to minus 45 degrees.

The Texas Electric Reliability Commission (ERCOT), which is responsible for supplying 90% of Texas’s electricity, stated that the sudden drop in temperature has led to a surge in electricity consumption and insufficient power supply. The state has entered a three-level emergency power supply alert. This alert level means Large-scale power outages in cities such as Dallas and Houston have taken turns.

The severe weather caused power outages for about 4 million homes and businesses in the state for more than 36 hours.

ERCOT said on the morning of the 17th that more than 600,000 households had restored their electricity supply at night.

But as of that day, nearly 3 million users in the state still had power outages.

The New York Times reported that in this winter storm, at least 31 people in 8 states have died. A family of four died when using a fireplace to heat their homes. Many people inhaled carbon monoxide poisoning while heating with different tools. Many people were killed in car accidents caused by slippery roads.

There are still many people in Texas without water due to freezing or cracking of water pipes.

Muno, a nurse in Dallas, had to collect snow and melt it to fetch water. "I never thought I would need to do this in Texas."

Angry Texas citizens discovered that although they shivered in the dark, the city center skyline was still lit.

Nichols, who lives in northern Austin, said: "My neighbors and I are very angry. This is a disaster. There is no reason to freeze the entire community to death."

On February 15, local time, Texas was hit by a winter storm, and temperatures throughout the state were below zero degrees Celsius.

The picture shows the signs on the roadside covered in snow and ice.

[Vaccination and delivery are blocked, and a new round of storm will strike again]

Poor road conditions have also made it difficult to deliver vaccines. Houston Mayor Turner said that Houston's vaccination center will continue to be closed.

According to the Texas Department of Health Services, vaccine delivery across the state will also be delayed, depending on local weather conditions.

A vaccine warehouse in Houston may have lost 8,000 doses of new crown vaccine due to a backup power failure.

The heavy snow has severely affected the vaccination schedule. Even if the vaccination center is restored later, the authorities still have to reschedule the injections for the affected people in these few days. The overall vaccination sequence is expected to take several weeks to return to normal.

The Colorado Joint Information Center said a vaccine delivery center in Tennessee was affected and will delay the delivery of vaccines to Colorado and other states.

Ohio Governor Dewan said that due to bad weather, vaccines shipped directly from Pfizer and Modena are expected to be delayed by one to two days.

According to an official press release, due to anticipated delays, vaccines being shipped to Illinois will be shipped directly to the "National Strategic Reserve Receiving, Storage and Exercise Base."

In Chicago, heavy snow caused the closure of all testing and vaccination centers, and the authorities expect vaccine delivery to be blocked in the next few days.

To make matters worse, the National Weather Service predicts that in the next three days, from Texas to Mississippi, and north to Virginia, there will be a new round of severe weather.

Affected by the new round of polar cold currents, dozens of counties in the Dallas area from Fort Worth, Texas have received winter storm warnings. Ice and snow are expected to occur. In the northeastern part of the metropolitan area, snowfall is expected to be as high as six. Inches (about 15.2 centimeters).