Corona Fund: How the economy should grow again after the crisis

It is an unprecedented feat of strength for the European Union: Together we run into debt for reconstruction. Now the development fund is ready to go. But one hurdle remains. 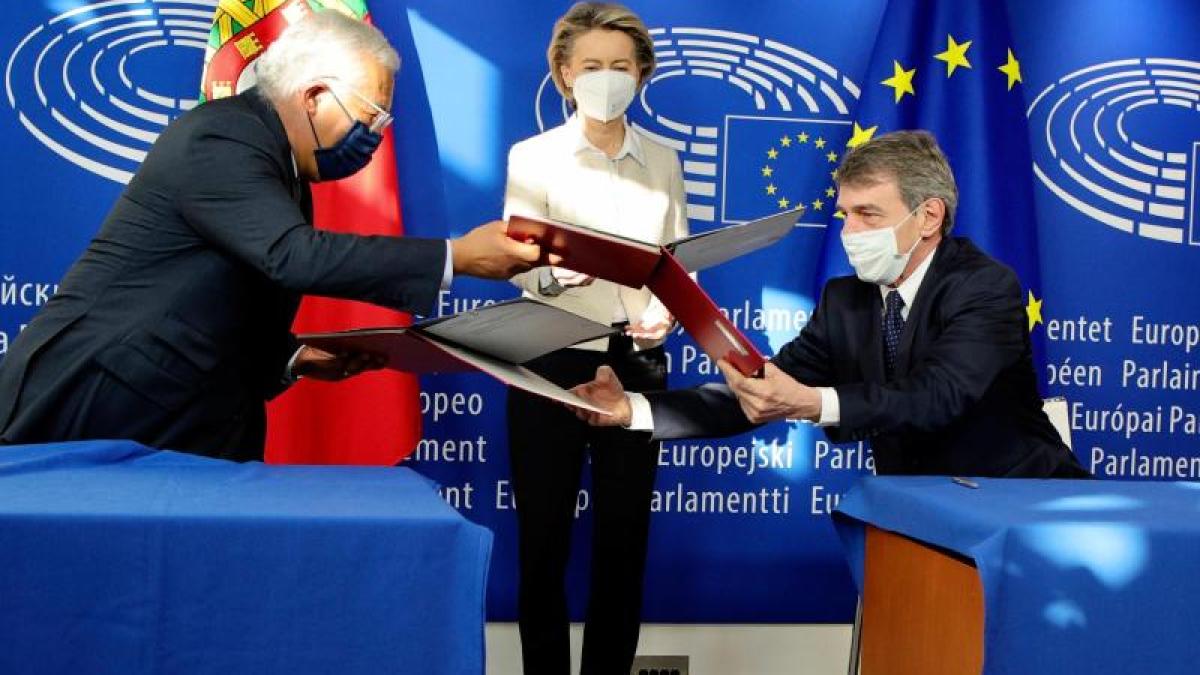 Brussels (dpa) - How do you spend 750 billion euros sensibly?

The economics and finance ministers of the EU countries will have to deal with this task on Tuesday.

Because the heart of the European program against the Corona economic crisis - the RRF development fund - is finally wrapped up after months of preparation.

The money should help the European economy back on its feet and at the same time make it fit for the next few decades.

Because it will take decades to collectively pay off the debt for the fund.

The most important questions and answers:

In total, the European Union wants to invest 750 billion euros in economic reconstruction after the pandemic.

The program is called Next Generation EU.

Most of the money - namely 672.5 billion euros - will be distributed via the construction fund - in EU jargon, construction and resilience facility, in English Recovery and Resilience Facility or RRF.

The remainder of the 750 billion will come through programs in the EU budget.

Incidentally, the sums are all given in 2018 prices.

Why is this politically significant?

For the first time, the EU Commission will take on such large sums as joint debts.

And for the first time, debt-financed money is given as a grant to EU countries.

The countries that have been particularly hard hit by the pandemic have the prospect of the largest sums: According to estimates, Italy can receive 65.5 billion euros in grants alone, Spain around 59 billion euros.

As things stand, Germany can expect grants of 22.7 billion euros.

So it is being redistributed vigorously.

The aim is to narrow the economic gap in the EU and to strengthen the internal market, from which Germany in particular benefits.

What should the money be spent on?

The billions should stimulate growth and jobs, but at the same time make the European economy more modern and environmentally friendly.

This is why at least 37 percent of the funds from the RRF should be spent on climate protection and 20 percent on digitization.

Other priorities are economic and social cohesion and strengthening public institutions.

How do the EU countries get the billions?

The 27 governments have to submit detailed RRF plans to the EU Commission.

These have to prove the financing goals for green and digital.

In addition, the billions from Brussels are to help implement the economic policy recommendations for the EU to grow closer together.

According to the EU Commission, 18 states have submitted drafts, and six others have at least approaches.

Italy had plunged into a government crisis over the dispute over the use of the cash injection.

Now this will be one of the most important tasks of the new government under the former ECB chief Mario Draghi.

What does Germany want to do with its share?

The federal government wants to put 40 percent of the money each into climate protection and digitization and is thus above the European requirements.

The German draft also still has to be discussed at EU level.

It is already being criticized that the federal government wants to put the money primarily in projects that were already planned.

What are the next steps?

From February 18, the EU states can officially submit their applications.

The deadline is at least April 30th.

The EU Commission examines the templates within eight weeks, after which the Council of EU States must also approve them.

The money is to flow in tranches, provided that commitments are kept.

One important hurdle has to be cleared before the first payments can be made: all 27 EU countries will have to ratify the so-called own funds decision in the next few months.

This is the legal basis for the EU Commission to be able to borrow for the development plan.

Only then can the first funds be paid out, probably in the summer.

Information from the EU Commission on the RRF

Estimates of the grants from the RRF to individual countries

Who gets what from the build-up program, article Handelsblatt from January 18, 2021

Draft legal framework of the RRF

Ministry of Finance on German plans

Questions and answers from the EU Commission on the RRF