"Raised funds for the needs of the militants": the FSB stopped the activities of a group of IS supporters in Crimea and Tatarstan

The Federal Security Service of Russia stopped the activities of a group of Russians involved in organizing the financing of the "Islamic State" * in Crimea and Tatarstan. The ministry clarified that from 2015 to 2019, the extremists, under the guise of charitable assistance, collected money to be transferred abroad for the needs of the militants. During the search, communications equipment, computers and magnetic storage media were seized from them. Criminal cases have been initiated for assisting terrorist activities. 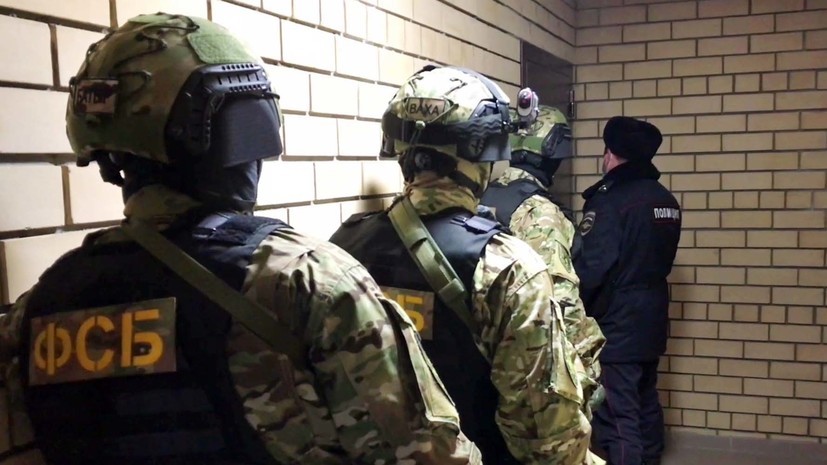 The Federal Security Service of Russia stopped the activities of Russians involved in organizing financing of the terrorist organization "Islamic State" * in Crimea and Tatarstan.

This was reported in the Center for Public Relations of the department.

The arrest operation was carried out jointly with Rosfinmonitoring.

"In the course of the events, a group of people was detained who, from 2015 to 2019, through the communities created on the Internet under the guise of charitable assistance, collected funds for transferring abroad for the needs of the militants," the service said.

During a search in the homes of Russian citizens, department employees found communications equipment, computers, magnetic storage media and other items used to try to support terrorists.

“The investigative subdivision of the territorial security agency has initiated and is investigating criminal cases against the detainees on the grounds of corpus delicti under Part 1.1 and Part 4 of Art.

205.1 ("Assistance to terrorist activities") of the Criminal Code of Russia ", - noted in the department.

A video of the arrest of extremists was also published.

The footage, in particular, shows how the security forces infiltrated the house of IS supporters and confiscated their laptop, electronic media and bank cards.

Over the past few months, the FSB and the National Anti-Terrorism Committee have prevented a number of attempts to prepare terrorist attacks on Russian territory, and have also detained citizens who supported terrorists.

Thus, on February 11, a local resident was detained in Norilsk, who was recruiting people to provide medical assistance to the militants.

During the searches, the security forces seized extremist literature and the IS flag from the man.

According to the service, the detainee supported the terrorists, imbued with the ideas of radical Islam.

A case was opened against the man under Art.

205.1 of the Criminal Code of Russia ("Assistance in terrorist activities").

Also in early February, the activities of a conspiratorial terrorist cell was suppressed in Dagestan.

According to the FSB, two people were detained while seizing the contents of the cache, where the IEDs, firearms and ammunition were located.

The members of the terrorist cell, the FSB press service said, planned attempts on the lives of law enforcement officers and other crimes of a terrorist nature.

At the end of January, the FSB, together with the Russian Guard, suppressed the activities of a cell of the international terrorist group Hizb yt-Tahrir al-Islami ** in the Kaluga region.

“With the use of conspiracy measures during the meetings, they spread terrorist ideology among the inhabitants of the region, recruited local Muslims into their ranks,” the message says.

It is noted that the actions of the members of the cell were based on the doctrine of the creation of the so-called world caliphate and the destruction of the institutions of a secular society.

Criminal cases were also initiated against the detainees.

On December 25, it became known that employees of the Federal Security Service prevented a terrorist act in Tambov, which was trained by a student of a local college born in 2003.

Explosives, components for making an improvised explosive device, and online instructions on how to assemble and use it were found in his apartment.

Later, Elena Kyarsna, a senior assistant to the head of the investigative department of the RF IC for the region, told RIA Novosti that the young man had been arrested for two months.

In December, during a visit to the headquarters of the Foreign Intelligence Service (SVR), President Vladimir Putin noted that the actions of the Russian special services had significantly reduced the number of terrorist crimes.

“Behind these statistics is a huge daily dangerous and hard work, its new quality.

Employees of the FSB and other services under the aegis of the National Anti-Terrorism Committee must continue to act with the same decisiveness and consistency, ”the president said.

** "Party of Islamic Liberation" ("Hizb ut-Tahrir al-Islami") - the organization was recognized as terrorist by the decision of the Supreme Court of the Russian Federation dated 02.14.2003.