Restraint policy: what a parliamentary victory for independence means for Catalonia

Supporters of self-determination of Catalonia won the elections to the autonomy parliament. In total, such parties received more than half of the mandates. Now they have to form a ruling coalition. During the election campaign, politicians promised to continue the struggle for the creation of a Catalan Republic separate from Spain. The supporters of independence have already made such an attempt in 2017, but the referendum only led to prison sentences for its organizers. Experts doubt that now the winning parties will again dare to challenge Madrid. 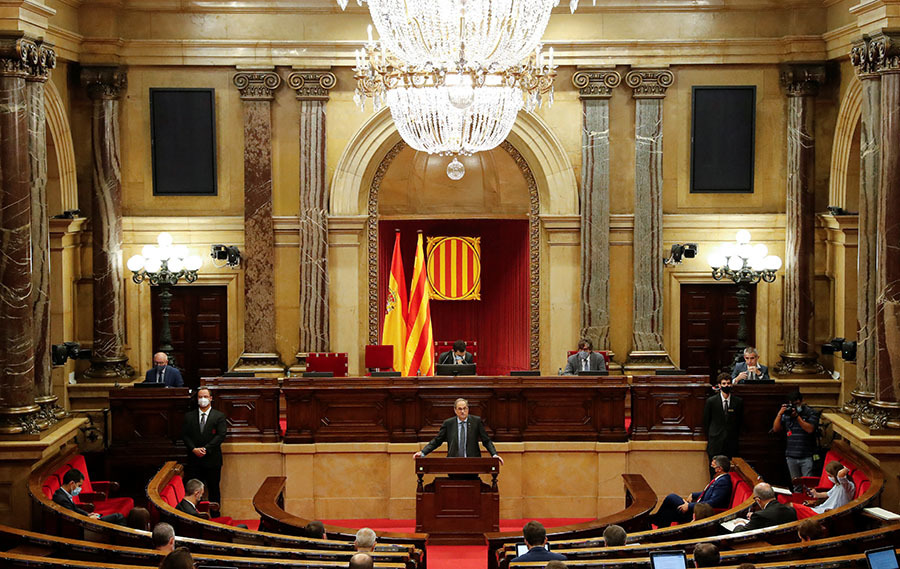 Supporters of the independence of Catalonia receive the majority of seats in the parliament of the autonomous community following early elections.

Re-elections were called after Kim Torra was removed from the post of head of the Catalan Cabinet of Ministers by a decision of the Spanish Supreme Court.

The party "Left Republicans of Catalonia" (Esquerra Republicana de Catalunya (ERC) gains 33 seats in parliament. The party supports the self-determination of Catalonia, its leader - Oriol Junqueras - was previously sentenced to 13 years in prison for organizing a referendum on the independence of the region.

As ERC spokeswoman Marta Vilalta said, "The independence movement needs to be strengthened through consensus and strategic alliances, and to continue on the path to the Catalan Republic to serve the people the way they deserve."

In its election campaign, the party focused on the question of self-determination of Catalonia.

A week before the elections, the leader of the Oriol Junqueras party (a politician serving a prison sentence for organizing an independence referendum in 2017) called on voters to mobilize.

“I implore you on February 14 to fill the ballot boxes with ballots in support of our party - for dignity, freedom, Republic, amnesty and self-determination - and to make our victory possible so that we can lead the greatest triumph in history,” the politician said in a statement.

Party "Together for Catalonia" (Junts per Catalunya, JxCat) won 32 seats in parliament.

Its founder is the former leader of Catalonia, Carles Puigdemont, who fled the country due to criminal prosecution by the Spanish authorities.

The party also defends Catalonia's right to self-determination and has come under pressure from law enforcement during the preparation of the independence plebiscite in 2017.

The organization proposes to borrow Canadian experience to resolve the issue of self-determination of autonomy.

We are talking about the Canadian Clarity Act, which defines the set of requirements necessary for the implementation of the secession of a particular region.

The Socialist Party of Catalonia (Partit dels Socialistes de Catalunya (PSC), which stands for the unity of the kingdom, won 33 seats in parliament.

There are 135 seats in the legislative body of the Autonomous Community.

Ardent opponents of the independence of the autonomous community also entered the Catalan legislature.

"The autonomous state did not justify the goals for which it was created, and the cost of maintaining it has reached alarming proportions," the party's program says.

The organization argues that political decentralization, “pushed to an extreme, questionably compatible with the Constitution,” is far from resolving the “nationalist” issue in Catalonia and the Basque Country.

“Tensions have escalated and Spain is on the verge of collapse.

Our autonomous state is politically unmanageable and financially unstable, ”the party says.

As the assistant professor of the Department of Integration Processes at MGIMO Alexander Tevdoy-Burmuli noted in the RT commentary, the results of the elections in Catalonia only confirmed the long-standing tendency to split Catalan society.

“This split has persisted for many years.

Today Catalonia is divided into exactly two parts in terms of its preferences.

As a rule, about 50% of voters are in favor of keeping the autonomy within Spain, while 44-48% vote steadily for independence.

In Catalonia, there are both parties that are more rigidly in favor of independence, and those forces that want to maintain autonomy, ”the expert explained.

Tevdoy-Burmuli added that it is difficult to say now what the new government of Catalonia will be, since little time has passed since the elections.

In turn, Vladimir Schweitzer, head of the department of social and political research at the Institute of Europe of the Russian Academy of Sciences, believes that the coronavirus pandemic could have influenced the election results.

“The growing popularity of parties advocating self-determination may also be related to the dissatisfaction of residents with the measures taken by Madrid to combat the consequences of the pandemic.

The Catalans got the impression that the authorities did not pay due attention to their interests during the pandemic.

And those inclined to secession of the party used this topic in their campaigning, ”the expert noted in a commentary on RT.

The growth of national consciousness in Catalonia occurred at the beginning of the last century, when the Spanish government recognized the very existence of the Catalan nation.

After the formation of the Spanish Republic in 1931, the Catalans received the right to self-government.

In 1934, even a project to create an independent Catalonia began to be implemented, but the defeat of the Republicans put an end to these plans.

During the reign of General Franco, any manifestation of national identity, except for the Spanish, was harshly suppressed by the authorities, experts remind.

The Catalans had to endure years of persecution and repression, and they did not even have to think about the self-determination of the region.

However, after Franco's death, the situation changed.

A new constitution was adopted in the country, which endowed Catalonia with an autonomous status, and the Catalan language was soon recognized.

The rise of such sentiments in Catalonia spurred the 2008 economic crisis.

Already in 2012, rallies were held in the region demanding the separation of the region from Spain and the creation of its own sovereign state.

Supporters of self-determination began to win elections to the local parliament.

The first referendum on the independence of Catalonia was planned for 2014, but then the plebiscite never took place.

The vote was blocked by a decision of the Spanish Constitutional Court, which ruled that such an initiative was contrary to the basic law of the kingdom.

However, supporters of the independence of Catalonia did not abandon their attempts to hold a plebiscite.

In the summer of 2017, the head of the Catalan government (then this post was held by Carles Puigdemont) announced that the referendum would still take place.

The initiative received the support of the regional parliament, where supporters of self-determination had the majority of the seats.

Despite all the measures taken by the Spanish authorities, the vote was still held on October 1.

According to the organizers, the turnout was about 50%, with 90% of the participants voting for the independence of Catalonia.

However, the Catalan leadership could not realize these results - the politicians involved in organizing the referendum were arrested and sentenced to long prison terms.

Former leader of the Catalan government Carles Puigdemont managed to leave the country and is hiding from the Spanish justice in the EU.

After the verdict was announced to the ex-leaders of Catalonia in the fall of 2019, mass protests began in the autonomous community.

Over half a million people took part in the demonstrations.

The riots in the streets of Catalonia lasted for several days.

According to Vladimir Schweitzer, despite the fact that the parties in favor of secession from the kingdom gained more than half of the votes in the elections, the very topic of the secession of Catalonia is not very relevant for the region today.

“Many people have an understanding that in the current conditions, separation from Spain will not give Catalonia anything good.

Although the Catalans undoubtedly have national pride and a desire for independence.

However, today the Catalan economy is in dire straits.

And initiatives aimed at creating their own state played a role in this, ”the expert said.

The fact is that many companies began to leave Catalonia, the expert explained.

Earlier it was made clear in Brussels that any newly formed state on the territory of the EU would be automatically excluded from the Union.

Such a country will have to rebuild trade relations with the EU, as well as go through a lengthy procedure for joining the Union.

“Therefore, I don’t think that Barcelona will take any drastic steps now.

Even if some of the members of the future ruling coalition in the region demand a withdrawal, more moderate politicians will try to smooth the situation, ”says Vladimir Schweitzer.

Alexander Tevdoy-Burmuli adheres to a similar point of view.

“Everyone remembers well how such an attempt ended in 2017: some of the organizers ended up in jail, someone was forced to flee abroad.

So the more moderate autonomists will keep their radical colleagues from drastic measures, ”the expert summed up.