Global media interest in the "Hope Probe" image of Mars

The image of Mars, which was captured by the "Hope Probe", topped the pages, screens and sites of many prestigious international media outlets, such as The Independent, The Washington Post, the Daily Mail, the BBC, and CNN "The Economic Times", "CNET" and "The Times of Israel", within wide coverage 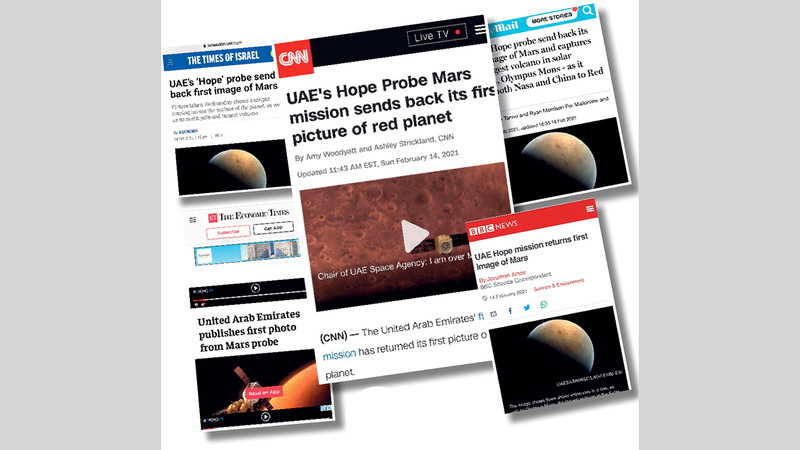 Extensive coverage on the importance of the project

Global media interest in the "Hope Probe" image of Mars

The image of Mars, which was captured by the "Hope Probe", topped the pages, screens and sites of many prestigious international media outlets, such as The Independent, The Washington Post, the Daily Mail, the BBC, and CNN "The Economic Times", "CNET" and "The Times of Israel", as part of a wide coverage of the importance of the photo, the UAE space exploration project, the scientific goals of the "Hope Probe" mission, and the UAE's efforts in space exploration.

The Emirates Mars Exploration Project had published the first image of the red planet, taken by the Hope Probe after its successful entry into the orbit of Mars, which is an indication of the efficiency of the probe, its subsystems and scientific apparatus, and its quality within its primary mission to provide information, data and images about the atmosphere of Mars. .

The technology site "CNET" pointed out that the distinctive image, which was taken from a distance of about 25 thousand kilometers, shows a picturesque view of Mars, in which it appears as a yellow half circle on the black background of space.

The site explained the details of the image, which includes a group of the most famous landmarks of the planet Mars, with Olympus Mons, the largest volcano in the solar system, at a point where sunlight diminishes, while the other three volcanoes in the Tharsis Montes series shine under a dust-free sky.

The "Times of Israel" website stated that about 50% of all missions to Mars failed, collapsed, burned, or did not arrive. If things went according to plan, the "Hope Probe" would settle within the next two months in an exceptionally high orbit, to scan the atmosphere. Saturated with carbon dioxide around the entire planet, at all times of the day, all seasons of the Martian year.

The British newspaper "The Independent" stated that the "Hope Probe", which entered the capture orbit around Mars after an unprecedented maneuver in the history of space missions, after operating the six reverse-propulsion engines at once, for a period of 27 minutes, was the success of the first interplanetary mission in the Arab world.

The ancient American newspaper "Washington Post" said that the image shows the surface of Mars at sunrise, as well as the North Pole of Mars, in addition to Olympus Mons, which is the largest volcano on the planet.

The British newspaper "Daily Mail" indicated that His Highness Sheikh Mohammed bin Rashid Al Maktoum, Vice President and Prime Minister of the UAE and Ruler of Dubai, published the photo on his Twitter page.

As for the BBC website, in a report it highlighted the sending of the "Hope Probe", the first image from Mars, stressing that the probe makes the UAE the first Arab country in history to have a scientific and exploratory presence in the near neighbor to Earth.

The site quoted extracts from the tweet of His Highness Sheikh Mohammed bin Zayed Al Nahyan, Crown Prince of Abu Dhabi and Deputy Supreme Commander of the Armed Forces, on his Twitter account. The BBC report indicated that one of the tasks of the Hope Probe is to study the causes Neutral hydrogen and oxygen atoms leak into space, the remnants of the abundant water that once covered Mars, and that research will add to scientists' understanding of how a once warm, water-rich planet turned into a cold, dusty, and dry planet today.

CNN continued its interactive coverage of the "Hope Probe" journey, providing news that the first Emirati project to explore Mars sent the first image of the red planet, which it took a day after its arrival on the red planet on Tuesday, February 9, 2021, and successfully entered the orbit of capture. After the first attempt.

The Indian website The Economic Times, which specializes in the world of business and economics, stated that the image shows sunlight coming towards the surface of Mars, as well as the North Pole of Mars, in addition to the largest volcano on the planet, called Olympus Mons.

coverage touched on the scientific goals of the "Hope Probe" and the UAE's efforts in space exploration.