The international media highlighted the first picture taken by the Hope probe of Mars, as the image was circulated in an unprecedented way in major newspapers, international television channels and specialized websites, reflecting the global interest in the data and images that the probe will collect 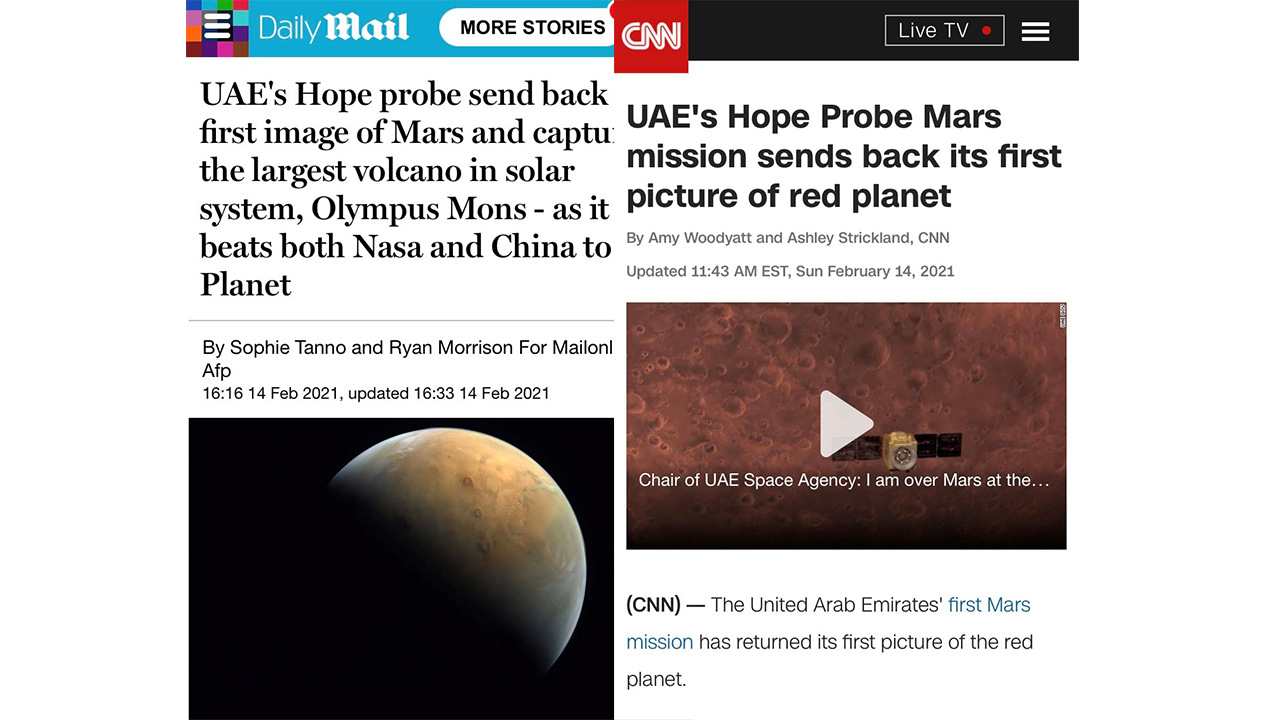 The international media highlighted the first picture taken by the Hope probe of Mars, as the image was circulated in an unprecedented way in major newspapers, international television channels and specialized websites, reflecting the global interest in the data and images that Al-Amal will collect in the process of supporting space science and knowledge.

The image of Mars captured by the Hope Probe dominated the pages, screens, and websites of many prestigious international media outlets such as The Independent, The Washington Post, The Daily Mail, BBC, CNN, The Economic Times, and CNET and The Times of Israel, as part of a wide coverage of the importance of the photo, the UAE space exploration project, the scientific goals of the Hope Probe mission, and the UAE's efforts in space exploration.

The Emirates Mars Exploration Project yesterday published the first image of the red planet taken by the Hope Probe after successfully entering the orbit of Mars, which is an indication of the efficiency and quality of the probe, its subsystems and scientific equipment, as part of its primary mission to provide information, data and images about the atmosphere of Mars.

CNET: The first great image arrived from the Hope probe

The "CNET" technology website indicated that the Hope Probe sent its first images after the UAE entered history by successfully reaching Mars orbit on Tuesday 9 February 2021, to become the fifth country to reach the Earth's neighbor, the Red Planet, and the third in the world to achieve this achievement from first attempt.

The global site indicated that the distinctive image, which was taken from a distance of about 25,000 km, shows a picturesque view of Mars in which it appears as a yellow half circle on the black background of space.

The site explained the details of the image, which includes a group of the most famous landmarks of the planet Mars, with Olympus Mons, the largest volcano in the solar system, at a point where sunlight diminishes, while the other three volcanoes in the Tharsis Montes series shine under a dust-free sky.

The Times of Israel: The "Hope Probe" is a source of pride for the UAE

The "Times of Israel" website reported that the UAE published the first image of the probe it sent to Mars, which is now orbiting the red planet, on Sunday.

The image, taken last Wednesday, shows sunlight illuminating the surface of Mars, the north pole of the planet, as well as its largest volcano, Olympus Mons.

The site stated that the probe entered Mars orbit last Tuesday in victory for the first interplanetary mission led by an Arab country, and the arrival of the Hope probe puts the UAE among only five countries in history that successfully delivered a mission to Mars, and as it is the first space exploration mission outside Earth's orbit, as the mission is the source The country's deep pride in its quest for a prosperous future in the space sector.

The site stated that about 50 percent of all missions to Mars failed, collapsed, burned, or did not arrive, indicating the complexity of interplanetary travel and the difficulty of landing through the thin atmosphere of Mars.

And the site continued that if things go according to plan, the Hope Probe will settle within the next two months in an exceptionally high orbit around Mars, to work through it to scan the atmosphere saturated with carbon dioxide around the entire planet, at all times of the day and all seasons of the Martian year.

The Independent: The Hope Probe is an unprecedented success for the first Arab mission

The British newspaper, The Independent, published a report about the Hope Probe capturing the first picture of the planet Mars. The newspaper said that the image, taken on Wednesday February 10, 2021, one day after the probe’s arrival to Mars, shows Olympus Mons, the largest volcano on the planet, with a scene of sunlight It shines on the surface of Mars.

The Independent stated that the first image taken by the Emirates Mars Exploration Project, the "Probe of Hope," which carries three advanced devices on board and aims to study the atmosphere of Mars, also shows the north pole of the red planet.

The newspaper pointed out that the Hope Probe;

Who entered the capture orbit around Mars after an unprecedented maneuver in the history of space missions after operating the six reverse thrust engines at once and for 27 minutes;

It marked the success of the first interplanetary mission in the Arab world.

Washington Post: The success of the first Arab mission to explore Mars

In a report accompanying the first photo of the probe, the prestigious American newspaper "Washington Post" stated that "the UAE has published the first picture of the Hope probe, which is now orbiting the red planet."

The newspaper said that the image shows the surface of Mars at sunrise, as well as the North Pole of Mars, in addition to Olympus Mons, which is the largest volcano on the planet.

The newspaper pointed out that the probe entered Mars orbit on Tuesday, which was a success for the first interplanetary exploration mission in the Arab world.

Daily Mail: The Hope Probe, the first arrivals this month to Mars, has captured the image of the largest volcano in the solar system

The British "Daily Mail" newspaper praised the dispatch of the Hope Probe its first image from Mars, in which it captured the image of Olympus Mons volcano on the surface of the Red Planet, which is the largest of its kind in the solar system, noting that His Highness Sheikh Mohammed bin Rashid Al Maktoum, Deputy The President, Prime Minister and Ruler of Dubai published the photo on His Highness's Twitter page.

The newspaper quoted the tweet published by His Highness about the first image from the Al-Amal probe, in which he said that it is "the first image of Mars by the first Arab probe in history."

The newspaper commented on the photo indicating that it is of Olympus Mons volcano, the largest volcano in the solar system, while sunlight infiltrates the surface of the Red Planet early in the morning, noting that the image was taken from an altitude of 25,000 km (15,300 miles) from the surface of Mars on Wednesday. February 10, 2021, one day after the lander reaches Mars.

The newspaper pointed out that the North Pole of Mars and three other volcanoes appeared in the first image of its kind sent by the Hope Probe.

The Daily Mail also attached a set of photos that show the journey of the Hope Probe project from the design stage on paper to its arrival to the Red Planet after a 493.5 million-kilometer flight over a period of about seven months of deep space travel.

BBC: The UAE is the first Arab country to have a scientific and exploration presence for planets

As for the multilingual BBC website, it highlighted in a report that the Hope probe sent the first image from Mars, after it entered the orbit of the Red Planet last Tuesday, confirming that the Hope probe makes the UAE the first Arab country in history to have a scientific and exploratory presence In Earth's near neighbor.

The report said that this first image will be followed by several similar scenes, images and unprecedented scientific data on Mars.

And the site added that the Hope probe was inserted into a wide orbit to be able to study the weather and climate in the red planet, which means that it will see the entire disk of the planet, and this type of vision is common from ground telescopes, but it is less common among satellites on Mars, as satellites approach Usually from the planet to obtain high-resolution images of the surface.

The site quoted excerpts from the tweet of His Highness Sheikh Mohammed bin Zayed Al Nahyan, Crown Prince of Abu Dhabi and Deputy Supreme Commander of the Armed Forces, on his Twitter account, in which he said: “Sending the first image of Mars by the lens of the Hope Probe ... good news, new joy ... and a defining moment in Our history, inaugurating the UAE’s accession to the elite of the advanced countries of the world in space exploration .. God willing, this mission will contribute to opening new horizons in the process of discovering the Red Planet that will benefit humanity, science and the future.

The BBC report indicated that one of the tasks of the Hope Probe is to study the causes of the leakage of neutral hydrogen and oxygen atoms into space, the remnants of the abundant water that once covered the planet Mars, and this research will add to scientists' understanding of how a warm and water-rich planet transformed in Previous to a cold, dusty, and dry planet today.

The US CNN news site continued its interactive coverage of the Hope probe journey, providing news that the first Emirati project to explore Mars sent the first image of the red planet, which it took a day after its arrival on the red planet on Tuesday 9 February 2021 and successfully entered the capture orbit after the first attempt.

The website referred to the tweets of His Highness Sheikh Mohammed bin Rashid Al Maktoum, Vice President and Prime Minister of the UAE and Ruler of Dubai, and His Highness Sheikh Mohammed bin Zayed Al Nahyan, Crown Prince of Abu Dhabi and Deputy Supreme Commander of the Armed Forces, which accompanied the publication of the accounts of their Highness. Twitter "and their praise of the achievement of the UAE project to explore Mars," The Probe of Hope. "

The arrival of the spacecraft to Mars made the UAE the fifth country in history to reach the red planet, the third country to reach it from the first attempt, and the first country to launch an interplanetary space mission at the level of the Arab world.

The Hope probe, equipped with three scientific instruments, will be the first complete picture of the Martian atmosphere, in addition to measuring seasonal and daily changes, which will help scientists understand the climate and weather dynamics in the different layers of the atmosphere.

Experts also hope to learn more about how energy and particles - such as oxygen and hydrogen - travel through the Martian atmosphere.

The Economic Times: The UAE publishes the first photo of the Hope Probe

The "The Economic Times", the famous Indian website specializing in the world of business and economics, reported that the UAE had published the first image of the Hope Probe, which is now orbiting the Red Planet.

The site stated that the image shows sunlight coming towards the surface of Mars, as well as the North Pole of Mars, in addition to the largest volcano on the planet, named Olympus Mons, adding that the probe entered its orbit around Mars last Tuesday, which is the success of the first interplanetary mission in the Arab world.