Thoughts spanning thousands of miles: How do overseas Chinese in Europe "Celebrate the New Year on the spot"?

China News Service, February 11th. According to the European Times, the ongoing new crown pneumonia epidemic has disrupted the Spring Festival plans of many overseas Chinese and overseas students. How to celebrate the New Year under the epidemic has become a "soul torture". Although everyone gave different answers, the yearning for their homeland and deceased people during the festive season has 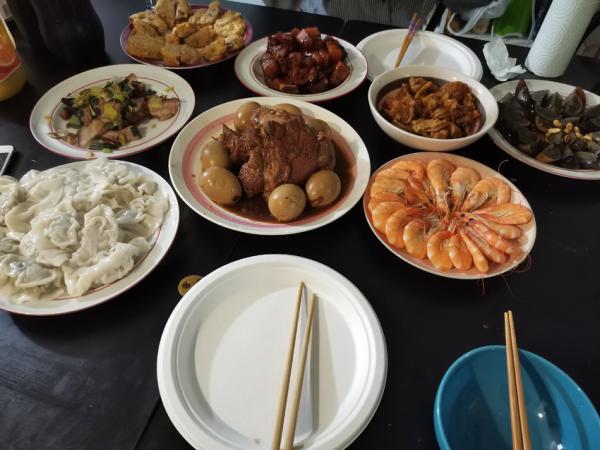 China News Service, February 11th. According to the European Times, the ongoing new crown pneumonia epidemic has disrupted the Spring Festival plans of many overseas Chinese and overseas students. How to celebrate the New Year under the epidemic has become a "soul torture".

Although everyone gave different answers, the yearning for their homeland and deceased people during the festive season has become the common feelings of overseas Chinese, and it also brings opportunities for the collision and integration of Chinese and Western cultures.

In mid-October 2020, Wu Jiajia (pseudonym) came to the University of Newcastle in the UK to study for a postgraduate degree. This Spring Festival is her first Chinese New Year overseas.

"When I was at home, I felt that the taste of the New Year became weaker and weaker, but I paid more attention to it after I went abroad. The new year is coming, especially in special times, it will be more'superstitious'." In order to win the New Year, she already I bought new clothes in advance, prepared the Spring Festival couplets and blessings to be posted, and called a few friends to have a New Year’s Eve dinner at home.

"Parents still think safety is the most important thing! I think (to stay in the UK for the New Year) is a new experience!" Despite the free and easy words, Wu Jiajia still sent out a rare "cry" expression after buying the new year's goods. Circle of friends.

If the epidemic is stable, she plans to return to China after graduation. "After all, Chinese people still feel that things at home will be better."

Gao Tianyu, a Shandong girl who just graduated from the University of Nice in France, misses the "sense of ritual" of celebrating the festival in a Chinese home.

"On the night of New Year's Eve, my mother will set up a small table at home with chicken, fish, meat, fruit, dumplings and other tributes, and then light incense. The family will worship at the small table, hoping to protect the health of the family Wait." On the morning of the New Year's Day, the whole family had to climb the mountain to offer incense in the temple. Until the fifteenth of the first lunar month, the festive atmosphere in hometown was very strong.

This year is Gao Tianyu’s fourth Spring Festival in France. In the past few years, she would make dumplings and prepare big meals with local Chinese friends, watch the Spring Festival Gala while eating, and then stay up late to drink and play games. They also participated in two Performances organized by the second student union.

This year, because of the epidemic and the procedures for pet kittens have not been completed, Gao Tianyu can't go home for the New Year. "It's a pity, a small pity."

"This year we may have a new group of friends for dinner," Gao Tianyu said, "we have already begun to think about the New Year's Eve dinner menu!"

2020 New Year's Eve dinner for Gao Tianyu and his friends.

Anti-epidemic policies, no holidays during the Spring Festival, too young children...For overseas Chinese and overseas students in Europe, staying there for the Spring Festival has long been the norm, but this does not mean the absence of surprises and emotions.

During the Spring Festival five years ago, Chen You's Dutch husband prepared a New Year red envelope for her. His parents also carefully prepared gifts, wrapped in festive red paper, and made strawberry cakes by themselves.

"Maybe their impression of the Spring Festival is booming", but these surprises still make Chen You very happy.

Yin Xiangjuan, a Chinese working in a Chinese company in Bremen, Germany, celebrates the Spring Festival with his German colleagues every year.

As the trade between Germany and China increases year by year, German friends and colleagues understand China more and more. “They know that we want to eat fish for New Year’s Eve to represent'surplus every year', and they also know that the word "Fu" means'Fu has arrived'..." However, the Germans are most interested in China's high-speed rail and Spring Festival travel. Yin Xiangjuan said that China's anti-epidemic results this year have also become a topic of major concern for the mainstream German media and the German public.

This year Yin Xiangjuan and his relatives and friends also watched the Chinese "Cloud Spring Festival Gala". Everyone relayed the group dance in the party, which was beautiful and fun.

Yin Xiangjuan told reporters that the 4-year-old son Feifei had not celebrated the Spring Festival in China because it was inconvenient to bring the children back to China in winter.

Jia Zhiguo (pseudonym), a returned overseas Chinese who has lived in France for more than ten years, will also prepare New Year gifts for his 2-and-a-half-year-old daughter, and establish the traditional cultural concept behind the Spring Festival through a little "sense of ceremony".

Recalling more than ten years of living in France, Jia Zhiguo told reporters about the many Spring Festival celebrations he participated in and organized in the overseas Chinese community.

From the small dinners organized by the student groups at the beginning to the large-scale gala activities involving hundreds of people, what made him feel the most is that the Spring Festival is becoming more and more international.

"Many French people experience Chinese culture through the Spring Festival." Jia Zhiguo said that as the number of Chinese in France gradually increased, the grand Spring Festival makeup parade in the Chinese settlements gradually attracted the attention of the local government and people.

Some official media that don't pay much attention to the Chinese community on weekdays also treat reports on this subject as "fixed programs."

It is the cultural characteristics displayed during the Spring Festival that make local people pay special attention to this "foreign culture" around them on this day, and it also promotes the exchange and understanding between the two ethnic groups.

Jia Zhiguo said that in fact, most French people have never been to China and can only learn about it through some movies and TV shows.

In the current Spring Festival activities, especially the performances of the younger generation of Chinese, whether it is costumes, songs or other talents, they can show the characteristics of contemporary Chinese and Chinese society.

Over time, Jia Zhiguo found that more and more French friends are willing to participate in the annual Spring Festival activities.

"One year I also collaborated with a French teacher on a program to recite Li Bai's "Will Entering Wine" in both Chinese and French." Jia Zhiguo introduced that some of these French people who are interested in Spring Festival activities are because of Chinese The culture is very fresh and curious, and some participants regard the experience of the Spring Festival folk customs as a way of teaching Chinese.

In addition, some French scholars who have a good understanding of and research on Chinese culture will also actively participate. “A French friend of mine buys some lanterns, couplets and other accessories every Spring Festival, and he decorates his home like Christmas.”

During the Spring Festival, French Chinese bloomed with different colors on that day.

Jia Zhiguo believes that whether you are an overseas student or an overseas Chinese, "it is the most important thing that you are a Chinese." In addition to integrating into the local lifestyle, establishing a true cultural identity is also a way of communication.

"In fact, I feel that a French friend is interested in you, first of all because you are Chinese. When he communicates with you, the collision of the two cultures or personalities is invisibly affecting each other." Jia Zhiguo said, Overseas Chinese and overseas students are actually cross-cultural communicators. The two cultures of China and the West collide with them as a "third culture". In the process of collision, they use different thinking and culture to compare and think, this is any kind of Features that a culture alone cannot fully possess.