The Medical Products Agency: Continue vaccinating according to plan

Continue vaccinating according to plan. That message is given by the Medical Products Agency after two regions paused the vaccination of staff with Astra Zeneca's vaccine as more people than expected suffered side effects. Meanwhile, French media report that a hospital outside the city of Rouen has temporarily stopped vaccination for the same reason. 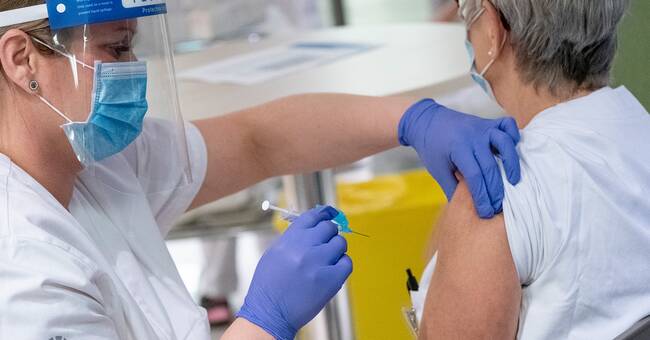 On Friday afternoon, first Region Sörmland and then Region Gävleborg announced that they would pause the vaccination of healthcare staff with Astra Zeneca's vaccine after more people than expected suffered side effects and reported sick from work.

These are common and expected side effects such as fever, muscle aches and chills - usually mild symptoms that disappear after 1-2 days.

Both regions stated that about 100 out of 400 vaccinated, ie a quarter, had a fever or fever-like symptoms.

Over the weekend, French media also reported that the Red Cross hospital in Bois-Guillaume outside the city of Rouen in France temporarily paused the vaccination of healthcare professionals with Astra Zeneca's vaccine.

Seven out of 20 of the staff, ie just under a third, became ill there due to symptoms after receiving a first vaccine dose.

- It is normal that they experience reactions, but it is proportionally very many who have had side effects, says chief physician Bruno Legallicier to France 3.

Larger studies show that around 10 percent suffer from similar symptoms in the normal case according to Andreas Heddini, medical director of Astra Zeneca in the Nordic region.

However, the Medical Products Agency sees no reason to change the recommendations regarding Astra Zeneca's vaccine.

Due to the decisions of Sörmland and Gävleborg, a written comment has been sent to all regions where they write, among other things:

“We have contacted the manufacturer and also talked to the chief physicians in the affected regions.

The Medical Products Agency currently sees no reason to make changes to the planned vaccination with AstraZeneca's vaccine on a general basis. ”

They also state that they continue to monitor the case.

Following the Medical Products Agency's announcement, at least two regions, the Västra Götaland region and the Halland Region, have communicated that they will continue to vaccinate with Astra Zeneca's vaccine according to plan.

At the same time, extensive vaccination with Astra Zeneca's vaccine has taken place in other countries and we have not received any similar reports from there or from the other regions in Sweden, says Anders Åkvist, chief physician in Halland to the region's website.