His Highness Sheikh Mohamed bin Zayed Al Nahyan, Crown Prince of Abu Dhabi and Deputy Supreme Commander of the Armed Forces, yesterday received the President of the friendly Republic of Ukraine, Vladimir Zelensky, who is on a working visit to the country, and during the meeting that took place at Al Watan Palace, he welcomed the Ukrainian president and the delegation 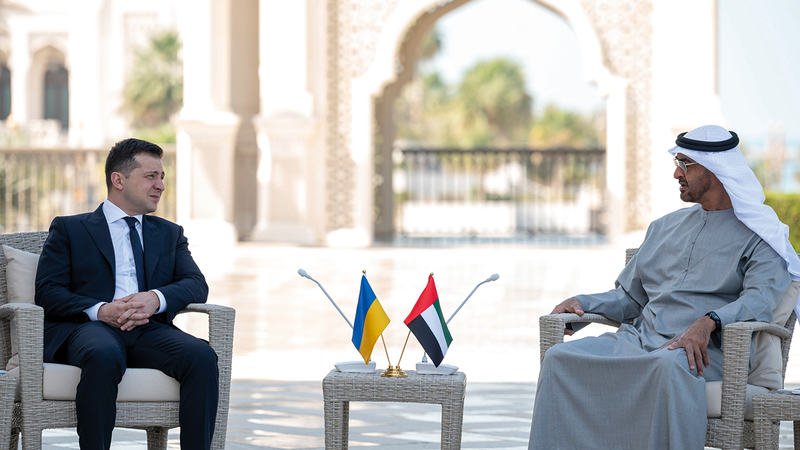 His Highness Sheikh Mohamed bin Zayed Al Nahyan, Crown Prince of Abu Dhabi and Deputy Supreme Commander of the Armed Forces, yesterday received the President of the Friendly Ukraine, Vladimir Zelensky, who is on a working visit to the country.

During the meeting, which took place at Qasr Al Watan, His Highness welcomed the Ukrainian President and the accompanying delegation in the UAE, expressing his confidence that the visit would be an important addition to the course of the two countries' relations at various levels, and conveying the greetings of His Highness Sheikh Khalifa bin Zayed Al Nahyan, President of the State, and his wishes to his friendly country. And his people will perpetuate progress, stability and prosperity.

At the beginning of the meeting, President Vladimir Zelensky congratulated His Highness Sheikh Mohammed bin Zayed Al Nahyan, and the UAE president, government and people for the successful arrival of the "probe of hope" to Mars, stressing the importance of the exceptional achievement in the service of the global scientific community and humanity, and that it is a valuable addition to the world's efforts in Areas of space science.

His Highness expressed his deep thanks and appreciation to the Ukrainian President for the good feelings he showed towards the success of the UAE in reaching the "Hope Probe" to Mars.

His Highness and Zelensky also discussed various aspects of technological, economic, commercial and development cooperation between the two countries, in addition to developments related to the Corona pandemic and the efforts made to confront it, and the importance of coordination and cooperation between countries of the world to address its repercussions on various human and economic levels.

The two sides also reviewed all regional and international issues and developments of common interest, and exchanged views on them.

His Highness also stressed that the UAE is an advocate of peace, stability and coexistence in the region and the world, due to its complete belief that the development that peoples aspire to can only be achieved in light of peace and stability, and for this reason it always calls for dialogue and political solutions to problems and conflicts between countries in all regions of the world.

For his part, the Ukrainian president expressed his thanks and appreciation for the support provided by the UAE to the health institutions in his country to enhance their capabilities and efforts in facing the Corona pandemic, stressing his keenness to develop areas of cooperation between Ukraine and the UAE in light of the many opportunities available in various sectors.

• The Ukrainian President congratulated the UAE on the successful arrival of the "Probe of Hope" to Mars.