Analysis: For the Kremlin, the diplomatic quarrel tastes more than it costs

Russia is throwing out EU diplomats and the EU countries, including Sweden, are responding with the same coin. But not really - because with Navalny supporters on the streets, the Kremlin has so much more to gain from the bickering. 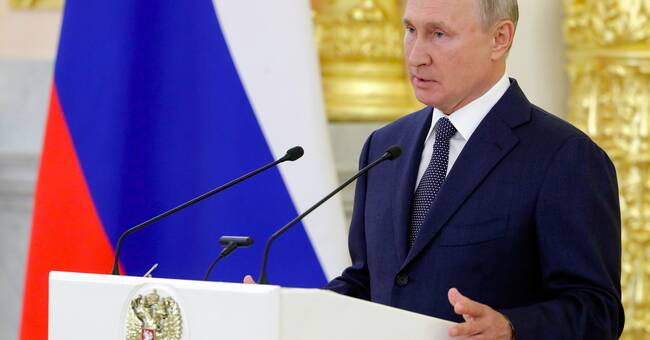 "A clear response to the unacceptable decision to expel a Swedish diplomat".

This is how Sweden's Foreign Minister Ann Linde describes the decision to send home a Russian diplomat in the high-profile dust between Moscow and three EU countries.

- When something like this happens, you have to act quickly and forcefully, Linde states in Rapport's evening broadcast.

From Linde's statements, one could easily get the impression that Sweden's move for the Russian part is an evenly heavy back cake, proportional to the nose-burning Russia invited by the Swedish Foreign Ministry.

For Sweden, it is of course also important to mark where it is believed that Russia gives a false picture of the situation.

You do what you have to do.

But it does not take an avid Kremlinologist to see what Russia, unlike Sweden, has to gain from the mine.

Something more valuable than the consequences of a diplomatic quarrel: the chance to try to link government-critical protests to foreign powers.

"Dog Whistling", as it is called when one's real message is between the lines but is clearly written for the intended recipient, in this case a domestic audience.

Alexei Navalny is first and foremost relevant in Russia through his revelations about the elite's enormous corruption.

But he is also a politician with a motley political past.

There is both market liberalism and nationalism and accusations of racism.

Especially the latter, Russian state media have previously highlighted when the drama of reality has made it impossible to silence Navalny.

However, it has not bitten any further, according to Russian experts, perhaps because xenophobia is still so widespread in Russia.

Instead, they have moved on to a more successful strategy: to portray Navalny and his followers as lackeys to foreign powers - traitors.

For example, Ann Linde's predecessor, the "openly Russophobic Carl Bildt", who himself recently commented on the matter at the Foreign Office.

That it is in fact foreign powers that are behind demonstrations in Russia is in itself a well-known accusation.

In 2011, Vladimir Putin accused US Secretary of State Hillary Clinton of personally sending signs to "certain actors in our country" and of calling for protests.

Against this background, it is easy to imagine that the real purpose of expelling the EU diplomats has less to do with what they actually did at that protest in St. Petersburg, than what is suggested by throwing them out.

Of course, diplomacy is not always a zero-sum game, or some kind of sport where you can designate clear "winners" and "losers".

But the fact that formally equivalent diplomats are thrown out of each country is - put in the larger perspective - this time a relatively cheaper price for Russia.