"The year that has just ended has left behind a load of fear, despair and despair", the Holy Father recalled. The pandemic has highlighted the crisis of politics and democracy. But the most serious - he remembers - is that of human relationships. The Pope's thoughts - during his reflections - go to countries at war, migrants, refugees and victims of domestic violence 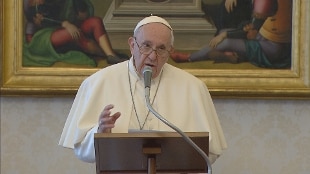 February 08, 2021 "The year just ended has left behind a load of fear, despair and despair, along with many griefs. It has placed people in a spiral of detachment and mutual suspicion and pushed States to erect barriers. The interconnected world we were used to has given way to a newly fragmented and divided world. "

Thus Pope Francis, receiving in audience the members of the diplomatic corps accredited to the Holy See for the presentation of good wishes for the new year.

"Vaccine is not a panacea, responsible attitudes are needed"

"Faced with a sneaky and unpredictable enemy such as Covid-19, the accessibility of vaccines must always be accompanied by responsible personal behavior aimed at preventing the spread of the disease, through the necessary measures prevention to which we have become accustomed in recent months "the Holy Father continues.

"It would be fatal to trust only in the vaccine, as if it were a panacea that exempts the individual from the constant commitment of the individual to their own health and that of others. The pandemic has shown us that no one is an island, evoking the famous expression of the English poet John Donne, and that the death of any man diminishes me, because I am part of humanity ".

The objective of containing the coronavirus has prompted many governments to adopt restrictive measures on the freedom of movement, which have led, for several months, to the closure of commercial businesses and the general slowdown of production activities, with serious repercussions on companies, especially the medium ones. -small, on employment and consequently on the life of families and entire sections of society, particularly the weakest "the Holy Father then highlighted.

The pandemic has also - he continues - highlighted a deeper crisis, that of politics, which it has been affecting many companies for some time and whose lacerating effects have emerged precisely in this dramatic phase. "One of the emblematic factors of this crisis is the growth of political conflicts and the difficulty, if not the inability, to seek common and shared solutions to problems that plague our planet.

It is a trend we have been witnessing for some time now and which is spreading more and more even in countries with an ancient democratic tradition.

Keeping democratic realities alive is a challenge of this historical moment, which closely affects all states: whether they are small or large, economically advanced or developing. "The Holy Father at this delicate moment for the country invited the Italians not to "break down".

The pandemic has brought out the need that every person has for human relationships. Everywhere an attempt has been made to activate a rapid response through educational computer platforms, which have shown not only a marked disparity in educational and technological opportunities, but also that, due to confinement and many other existing shortcomings, many children and adolescents they have fallen behind in the natural process of pedagogical development.

Furthermore, the increase in distance learning has also led to a greater dependence of children and adolescents on the internet and in general on virtual forms of communication, making them more vulnerable and overexposed to online criminal activities ”.

"I urge everyone, public authorities and civil society, to support the victims of violence in the family: unfortunately we know that it is women, often together with their children, who pay the highest price", says the Pope. to that during the coronavirus emergency he could not live "quietly in his own homes".

"The economy needs a Copernican revolution"

"The ensuing economic crisis has highlighted another disease that affects our time: that of an economy based on the exploitation and waste of both people and natural resources. too often solidarity and other values ​​that allow the economy to be at the service of integral human development, rather than particular interests, have been forgotten, and the social value of economic activity and the universal destination of goods and of resources. The current crisis is therefore a propitious opportunity to rethink the relationship between the person and the economy. We need a sort of 'new Copernican revolution' that places the economy at the service of man and not vice versa, 'starting to study and practice a different economy, the one that makes us live and does not kill, includes and does not exclude, humanizes and does not dehumanize, takes care of creation and does not rob it ".

"Next generation is a good example of solidarity"

“I believe that the commitment of the European Union and its Member States is significant, which despite the difficulties, have been able to show that it is possible to work hard to reach satisfactory compromises for the benefit of all citizens.

The allocation proposed by the Next Generation EU plan represents a significant example of how collaboration and the sharing of resources in a spirit of solidarity are not only desirable objectives, but really accessible ", hopes the Pope.

"Agree on climate, it's time to act"

"I hope that the next United Nations Climate Change Conference (COP26), scheduled for next November in Glasgow, will allow for an effective agreement to be found to tackle the consequences of climate change. this is the time to act, since we can already touch the effects of a protracted inaction "underlines the Pope.

"Even in Africa, climate change, aggravated by reckless human interventions and now also by the pandemic, is a cause of grave concern - he continues - I am referring above all to food insecurity which in the over the last year it has particularly affected Burkina Faso, Mali and Niger, with millions of people suffering from hunger; as well as the situation in South Sudan, where there is a risk of famine and where a serious emergency persists humanitarian: over a million children have food shortages, while the humanitarian corridors are often obstructed and the presence of humanitarian agencies in the territory is limited. Also in order to deal with this situation it is very urgent that the South Sudanese authorities overcome the misunderstandings and continue in the political dialogue for full national reconciliation ".

Last year saw "a further increase in migrants, who, thanks to the closure of the borders, have had to resort to increasingly dangerous routes. The massive flow has also encountered an increase in numbers illegal push-backs, often implemented to prevent migrants from seeking asylum, in violation of the principle of non-refoulement. Many are intercepted and repatriated to collection and detention camps, where they suffer torture and human rights violations, when they do not find their death by crossing seas and other natural borders ", said the Pontiff, speaking of the migrant issue.

"The humanitarian corridors, implemented over the last few years, certainly contribute to addressing some of the aforementioned problems, saving many lives. However, the scale of the crisis makes it increasingly urgent to tackle the root causes that drive migration, as well as requiring effort. to support the countries of first reception, which take on the moral obligation to save lives. In this regard, we look forward to the negotiation of the New Pact of the European Union on migration and asylum, while observing that policies and concrete mechanisms will not work if they are not supported by the necessary political will and commitment from all parties involved, including civil society and migrants themselves ".

"Since the Second World War the world has not yet witnessed such a dramatic increase in the number of refugees, as we see today. It is therefore urgent that we renew our commitment to their protection, as well as that of internally displaced persons and refugees. all vulnerable people forced to flee persecution, violence, conflicts and wars. In this regard, despite the important efforts made by the United Nations in the search for concrete solutions and proposals to address the problem of forced displacement in a coherent way, the The Holy See expresses its concern for the situation of displaced persons in various parts of the world. I refer first of all to the central area of ​​the Sahel, where, in less than two years, the number of internally displaced persons has increased twenty times ".

"We look forward to the negotiation of the New European Union Pact on Migration and Asylum, while observing that concrete policies and mechanisms will not work if they are not supported by the necessary political will and by 'commitment of all parties involved, including civil society and migrants themselves "concludes Pope Francis.

The Pope's thought also goes to the many theaters of war.

And he asks for peace in the Holy Land, Lebanon, and Central Africa.

In particular, he focuses on Syria: "How I would like 2021 to be the year in which the word end to the Syrian conflict, which began ten years ago, was finally written! - he underlines - For this to happen, renewed interest is also needed on the part of the international community to face the causes of the conflict with sincerity and courage and to seek solutions through which everyone, regardless of ethnic or religious affiliation, can contribute as citizens to the future of the country ".

Myanmar: "Leaders free and there is dialogue"

last week's coup. It led to the imprisonment of several political leaders, who I hope will be promptly released, as a sign of encouragement to a sincere dialogue for the good of the country ", the Holy Father finally recalled, referring to the recent coup in Myanmar.