Between cautious optimism and excessive pessimism ... the confrontation of Al-Ahly and Bayern Munich occupies the communication sites

Al-Ahly is Bayern Munich, Egypt, Al-Ahly can do it and achieve a surprise by beating Bayern. Al-Ahly will have an honorable defeat .. Al-Ahly is sufficient for it that its defeat - if it occurs - will be in front of the strongest European teams. 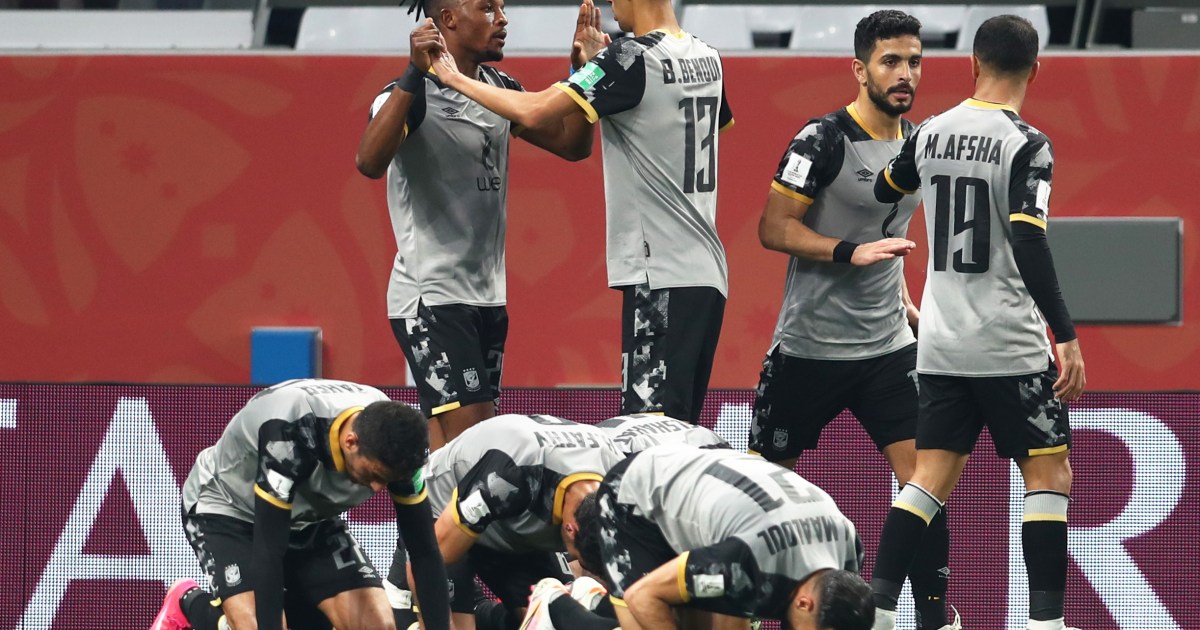 Al-Ahly is Bayern Munich, Egypt, Al-Ahly can do it and achieve a surprise by beating Bayern. Al-Ahly will have an honorable defeat .. Al-Ahly is sufficient for it that its defeat - if it occurs - will be in front of the strongest European teams.

What was mentioned is a sample of expectations that users of social media circulated ahead of the upcoming date in Doha between the European champion and the African champion in the semi-finals of the Club World Cup.

An exchange of satirical publications broke out between the fans of the two major clubs in Egypt, Al-Ahly and Zamalek, and each team prepared with its weapons of satirical comedy and recent history to attack or defend Al-Ahly club.

For their part, Al-Ahly fans celebrated the statements of the German Bayern Munich player, Joshua Kimmich, in which he described Al-Ahly as "Bayern Munich Egypt", indicating that the Egyptian team played many matches without defeat.

"We are very happy to have had the opportunity to participate in the tournament, and the chance to win it, but first we have to compete in the semi-final match, and we are the luckiest in it," Kimmich said at the press conference that preceded the upcoming summit tonight.

Al-Ahly player Mahmoud Abdel-Moneim said in a press statement, "I feel when I see Bayern Munich that they are like Al-Ahly because we are playing in a similar way."

And in a way closer to joking, the official page of Al-Ahly TV said by former Al-Ahly player Islam Al-Shater, "Today we are talking about (the weaknesses of Bayern Munich)."

Islam Al-Shater: We will talk today about "the weaknesses of Bayern Munich" even if some people are not able to understand this topic 😂

Despite these rosy statements, the realism of some fans appeared in publications that saw Al-Ahly in a really difficult test, and his luck landed him on the most difficult road in the World Cup clubs, as Al-Duhail club first instead of the Korean club Ulsan, then Bayern instead of Palmeiras.

Tweeters said that the comparison between Bayern and Al-Ahly is unfair to the Egyptian club, and that Al-Ahly players' demand to win over Bayern is "surprising", and pointed out that Al-Ahly's "amazing" play in front of Al-Duhail club confirms that Musimani is trained "as he is" (below the required level) and lucky. By playing several matches in the African Championship.

Tweeters explained that Al-Ahly's loss would be an honorable defeat against the European champion.

best band in the

world and even if they

best band in the

From the reality of the levels, the draw put Al-Ahly in the most difficult way in the World Cup, first Al Duhail instead of Ulsan, then Bayern instead of Palmeiras.

In terms of optimists, some fans resorted to the distant history by calling up an old match that took place between Al-Ahly and Bayern Munich in 1977, in which Al-Ahly won 2-1.

As for the media, expectations varied according to the affiliation of each club, whether Al-Ahly or Zamalek, so the journalist Ahmed Moussa said that a miracle could happen or "strangle the two teams" (they quarrel). As for the journalist Ahlawi Al-Hawa, Tamer Amin went to a great extent in optimism, affirming his complete confidence By defeating the German team, describing it as like the "Pyramids" team.

Everything is possible, God willing, Al-Ahly has the challenge pic.twitter.com/0lyWOyAeES

Oh God, I bear witness that you are the One God, the one who is steadfast, the individual who was not born, was not born, and was not enough for anyone to honor the Al-Ahly club by defeating Bayern Munich in the Club World Cup.

Today is a historic day, a day of confrontation between the European champion (Bayern Munich) Vs the African champion (Al-Ahly). The

football is not impossible, and we have a personality, spirit and pride that allows us to win anyone.

only god but Allah alone with

He is over all things, God willing ,

Between optimism and realism, tweeters from the fans of the two major Egyptian clubs Al-Ahly and Zamalek exchanged shells of ridicule, and each team summoned a set of pictures and comic videos, while Zamalek fans highlighted the size of the market value of the Al-Ahly club team of 25.5 million euros, compared to the market value of Bayern Munich of 880 million euros .

Other fans of Zamalek mocked the expected position of the Al-Ahly fans between the two halves when they face the truth.

On the other hand, Al-Ahly fans played down the positions of the Zamalek fans, which were expressed in their willingness to encourage Bayern and pray for him to defeat Al-Ahly while preparing to gloat at the club competing with their club after its "confirmed" defeat, according to their expectations.

Fans and players of Al-Ahly of Egypt after the end of the first half of the Bayern match pic.twitter.com/hC143WgEaZ

What is the benefit of Al-Ahly to play in the semi-finals of the FIFA World Cup for the clubs and meet Bayern and Zabalek defeat two games and see some.

Instructions, O Ibrahim, without religion: Lead the children to expel Cisse, and if they are not satisfied, he will pay a penalty. Your responsibility, Zabalek, Fayez and his fans rejoice.

I don’t understand it, by God, what is it when Al-Ahly is playing Bayern?

Do you encourage Bayern? Do not encourage Al-Ahly?

No medicine, I missed you what you are already the owner of the seriousness of the owner😂😂