"Probe of Hope" .. 3 scientific devices preparing to test their efficiency to serve humanity

In order to achieve the unprecedented scientific goals in human history for the "Probe of Hope" mission to the Red Planet, the probe carries three innovative scientific devices on board, capable of conveying a comprehensive picture of the climate of Mars and its different layers of atmosphere, thus giving the global scientific community a deeper understanding 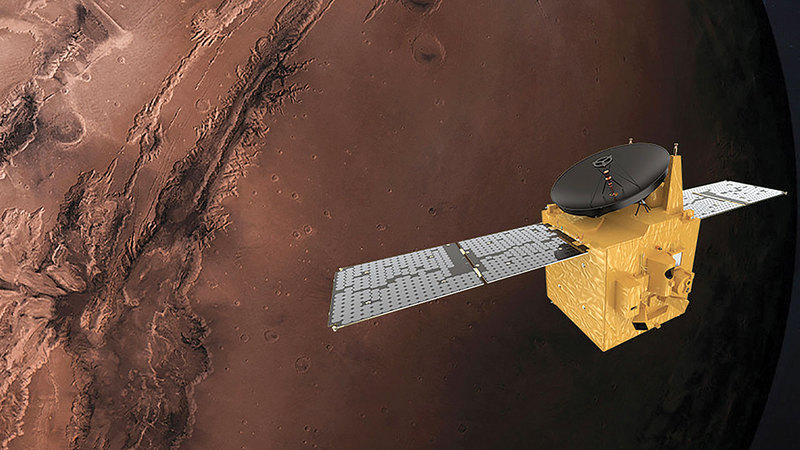 "Probe of Hope" .. 3 scientific devices preparing to test their efficiency to serve humanity

In order to achieve the unprecedented scientific goals in human history for the "Probe of Hope" mission to the Red Planet, the probe carries three innovative scientific devices on board, capable of conveying a comprehensive picture of the climate of Mars and its different layers of atmosphere, thus giving the global scientific community a deeper understanding of atmospheric processes. To the planet Mars.

The "Hope Probe" within the UAE project to explore Mars aims to provide the first integrated image of the Martian atmosphere. Therefore, three modern scientific instruments were specially designed to complete this mission and study the different aspects of the atmosphere of the red planet.

Upon the arrival of the "Hope Probe" to the sixth and final stage of its Martian journey, which is the scientific stage, after completing the completion of the previous five stages: launch, early operations, navigation in space, entering the capture orbit and moving to the scientific orbit, these three devices start over a full Martian year equivalent to 687 Earth days. An additional Martian year can be extended in the performance of its multiple tasks, in monitoring everything related to how the weather of Mars changes throughout the day and between the seasons of the Martian year, in addition to studying the causes of the disappearance of hydrogen and oxygen gases from the upper layer of the Martian atmosphere, which constitute the basic units for the formation Water particles, as well as investigating the relationship between the lower and upper layers of the atmosphere, monitoring weather phenomena, such as dust storms, and temperature changes, as well as the diversity of climate patterns according to its varied topography.

The "Hope Probe" carries three scientific instruments to study the climate of Mars, the first of which is: the EXI digital camera, which is a digital camera to capture high-resolution color images of the planet Mars, and is also used to measure ice and ozone in the lower layer of the atmosphere.

This device is a multi-wavelength radiation camera, capable of taking 12-megapixel images while maintaining the radiation gradient necessary for detailed scientific analysis, and the camera is composed of two lenses, one for ultraviolet rays and the other for color spectra, used to capture images with clear details of Mars.

The short focal length of the lens can reduce the amount of time required for exposure to a very short time to capture still images while orbiting around the planet, which raises the degree of accuracy and quality of images despite the high speed at which the probe is orbiting Mars. During its presence in the scientific orbit, the probe rotates in a cycle Complete around the red planet once every 55 hours.

The camera sensor consists of a monochrome 12-megapixel matrix with dimensions of 3: 4, and the image can be captured and stored on the memory chip so that the size and accuracy of the image can be controlled, which reduces the data transfer rate between the probe and the ground control center.

The sensor can capture 180 high-resolution images at one time, which means that you can shoot a 4K movie when needed, and the use of separate filters is an additional feature that can provide better accuracy for each color, as well as provide more accurate details in the image, which contributes to reducing the degree Uncertainty when measuring radiation for scientific imaging.

The mission of the digital exploration camera is to study the lower layer of the red planet's atmosphere by taking high-resolution images of Mars, measuring the optical depth of freezing water in the atmosphere, and measuring the abundance of ozone.

The second device is the EMIRS Infrared Spectrometer, which measures the temperature and distribution of dust, water vapor and ice clouds in the lowest layer of the atmosphere.

The device was developed to capture the integrated dynamics of Mars' atmosphere, using a scanning mirror to provide 20 images per session with a resolution of 100 to 300 km per pixel.

An infrared spectrophotometer contains a rotating mirror that measures infrared radiation in a range of 6 to 40 micrometers and is designed to give us a better understanding of how the weather changes during the day.

Specifically, this scale will be used to research the thermal state of the lower atmosphere, and the geographical distribution of dust, water vapor and water ice.

The third device, the EMUS ultraviolet spectroscopy, measures oxygen and carbon monoxide in the Martian thermal layer and hydrogen and oxygen in the outermost layer of Mars.

It is an ultraviolet scale designed to monitor the spatial and temporal changes of major components in the Martian thermosphere (at an altitude between 100 and 200 km) and the outer envelope (at an altitude of 200 km) on time scales.

It has a selectable spectral resolution of 1.3 nm, 1.8 nm and 5 nm, and a spectrum range of 100 to 170 nm to make the required observations of ultraviolet emissions of hydrogen (H), oxygen (O), and carbon monoxide (CO).

This spectrometer consists of a single-lens telescope feeding into the imaging spectrometer equipped with a Roland circuit, which is prepared for the process of counting and locating photons.

The ultraviolet spectrometer aims to determine the abundance and diversity of carbon monoxide and oxygen in the thermosphere on semi-seasonal time scales, and to calculate the three-dimensional composition and the changing proportions of oxygen and hydrogen in the outer atmosphere.

The Hope Probe collects more than 1000 gigabytes of new data on Mars, which will be deposited in a scientific data center in the UAE, and the project’s scientific team will index and analyze it.

The "Hope Probe" will reach the capture orbit around Mars tomorrow at 7:42 pm UAE time, while there will be a live broadcast of the probe arrival event at 7 pm via television stations, social media platforms and the Internet, and given that this stage is the most dangerous in the mission. The entire probe, all subsea devices on board will be re-examined and tested before moving to the scientific stage.

The "Hope Probe" had successfully completed three stages in its first historical mission of its kind, since its launch from the Tanagashima Space Center in Japan on board the H2A missile on July 20, 2020 at 01:58 am UAE time, which are: The launch, the early operations stage, and the navigation stage in space, and there are three other stages remaining before the probe: entering Mars, moving to the scientific orbit and then the scientific stage during which the probe, through its scientific apparatus, will collect and send data about the red planet, and each of these stages has its own risks, nature and challenges. The quality that requires handling with precision.

• Scientific instruments provide a comprehensive picture of the climate of Mars and the causes of the erosion of its atmosphere.

• The devices were developed by the joint efforts of the Mohammed bin Rashid Space Center and Knowledge Partners.