The Swedish Health and Care Inspectorate is currently investigating an established player in the HVB market in Stockholm County. SVT now tells one of the young people and several of the staff about misconduct at the HVB homes. - It is called a treatment home but it is not a treatment. They just want money, says a 15-year-old boy we call Alex who has lived in several of the group's homes. 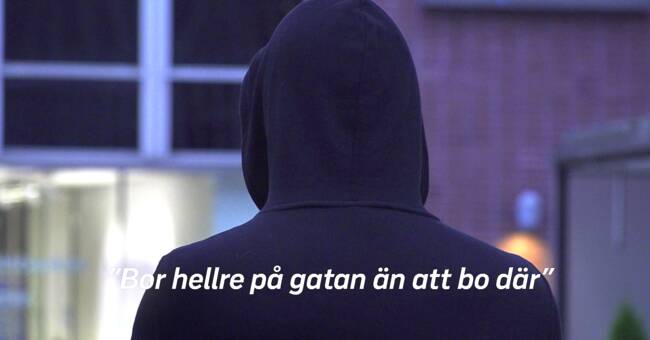 They themselves describe themselves as a well-established business that has framework agreements with several of Sweden's municipalities.

But now there is strong criticism from within the HVB homes.

- The people I lived with tried to rape me, says 15-year-old "Alex", who has now moved from NSU's HVB home.

The incident was reported to the police, who later dropped the preliminary investigation.

According to the staff, many of the incidents they report are due to the employee working alone and not being able to handle the serious situations that have arisen.

It is also about sexual abuse, which has happened several times, says an employee.

Since 2015, almost 20 different types of reports have been received by Ivo concerning NSU.

It is about staff, young people and parents who sound the alarm, but also about alarms from the police.

The criticism is, among other things, that the staffing is too low and that parts of the staff lack adequate training.

The latest report led to Ivo conducting an unannounced inspection in early December, and scheduling and staff training levels are some of the things Ivo has now requested information on.

Ivo investigates and then Ivo has to come back with what they find and if there is something that is wrong, says NSU's CEO Mikael Karlsson.

Do you have tips about HVB homes in Stockholm County that we should review?