The Yellow River flows through Lanzhou City: Residents lamented where did the "Yellow" River go?

China News Service, Lanzhou, February 2nd (Cui Lin Ai Qinglong) Since the beginning of winter, the Lanzhou section of the Yellow River has clear waters and many migratory birds play for food. Looking down from a high altitude, under the influence of the sun, the Yellow River has become more "emerald green". "The color has changed the yellow impression of the past. Residents lamented where did th 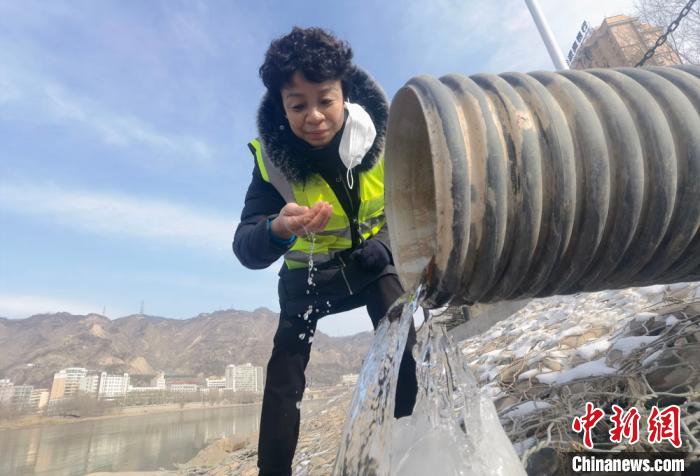 China News Service, Lanzhou, February 2nd (Cui Lin Ai Qinglong) Since the beginning of winter, the Lanzhou section of the Yellow River has clear waters and many migratory birds play for food. Looking down from a high altitude, under the influence of the sun, the Yellow River has become more "emerald green". "The color has changed the yellow impression of the past.

Residents lamented where did the "Yellow" River go?

The picture shows Liu Ying, a pipe dredger, checking whether the rainwater pipe opening is unblocked and whether the water body has peculiar smell.

Recently, the Lanzhou section of the Yellow River has clear waters and many migratory birds frolicking for food; looking down from a high altitude, under the influence of the sun, the Yellow River is even more "emerald green".

In the summer, we saw the Yellow River water is relatively yellow, mainly due to heavy rainfall in the upper reaches which brought sediment into the Yellow River. In winter, because there is no muddy water, it looks clear, but the yellow water of the Yellow River does not mean that the water quality is not up to standard. .

The picture shows the "green" color of the Lanzhou section of the Yellow River.

Feng Zhiliang said that since 2013, Lanzhou City has implemented a series of measures to complete the improvement of 262 kilometers of river floodways, including the Yellow River. The direct discharge of domestic sewage is intercepted and the water quality is stable at the exit section of the Yellow River. Up to standard.

After several years of protection and management, the former river beach sill has been replaced by a block of cement grid structure ecological prefabricated blocks. Through the reinforced mike pad laid below, they are firmly connected as a whole. The flood control system is becoming more and more perfect. You will see it on the way to work. Green trees line the Yellow River.

"Soil and water conservation is closely related to the ecological protection of the Yellow River." said Ren Zhibin, deputy commander of the Lanzhou North and South Mountain Environmental Greening Project Command. Due to the geographical feature of "two mountains and one river", the north and south mountains surround the east and west Yellow River crossing the city. Before the founding of the People's Republic of China, Lanzhou had a harsh ecological environment, and there was a saying among the people that "yellow water shines on barren mountains".

In order to improve the ecological environment around Lanzhou, reduce dust pollution and reduce soil erosion, Lanzhou people carry ice on the mountain every year, carry water to fight drought, plant trees, and plant a tree with the energy of feeding a baby.

Finally, thanks to the efforts of several generations, planted forests have covered both inside and outside the city.

The staff of the Qilihe Anning Sewage Treatment Plant in Lanzhou City used glassware to collect the treated sewage. It was clear and odorless, with only a few particles visible to the naked eye.

According to him, at present, 620,000 acres of artificial forest land has been preserved around Lanzhou City to form a green ecological barrier. In 2019, the northern and southern mountain forest regions released 538,800 tons of oxygen, reducing the sedimentation of the Yellow River by 55.68 in the Lanzhou section of the Yellow River. Ten thousand (cubic meters). Nowadays, farmhouses in the northern and southern mountains are in the ascendant, and they have become a good place for local people and foreign tourists to relax and entertain. The ecological and economic benefits are increasingly prominent.

Liu Ying, a native of Lanzhou, has been engaged in pipeline dredging for 24 years.

She walks along the Yellow River every day to check whether the rainwater pipes are open, and her work is monotonous and repetitive.

"In the early years, I often felt inferior because I'drew out water', and I hid when I met acquaintances. At that time, the work intensity was very high. I put on half of a raincoat, tied a rope around my waist, and held a long spoon before going down to the well to clean it out manually. They can’t eat food for a week after they come out.” However, Liu Ying understands that their job is to ensure that domestic sewage is pressurized by the pumping station, sent to the sewage treatment plant, and then treated as a prerequisite for safe discharge into the Yellow River.

"Why do you need people for every job!" Liu Ying said. Nowadays, various mechanized operations, such as the use of functional equipment such as the Great United Dredging Suction Truck, Dredging Truck, Drainage Truck, and Sludge Cleaning Truck, make work more efficient. It has been greatly improved. In the past, there were 9 people in a class, and a maximum of 20 or 30 manholes were cleared in a working day, and 70 or 80 meters of pipes were dredged. Nowadays, there are only 4 people in a class, and 70 or 80 wells can be cleared in a day, and hundreds Meter pipeline.

Liu Ying said that after several years of black and smelly water remediation and atmospheric remediation, the sky in Lanzhou has become bluer and the water clearer. Migratory birds have also flew to the Yellow River to inhabit. This proves that the Yellow River is well managed and our work is recognized. worth it!

Worker Jiao Tao of the plant used glassware to collect the treated sewage. It was clear and odorless, with only a few particles visible to the naked eye. The green landscape around the plant was completely irrigated. Wild ducks often appeared at the discharge outlet of the Yellow River.