Hesse's head of government Bouffier has announced a step-by-step plan for possible corona easing. However, this only takes effect from a certain rate of new infections. 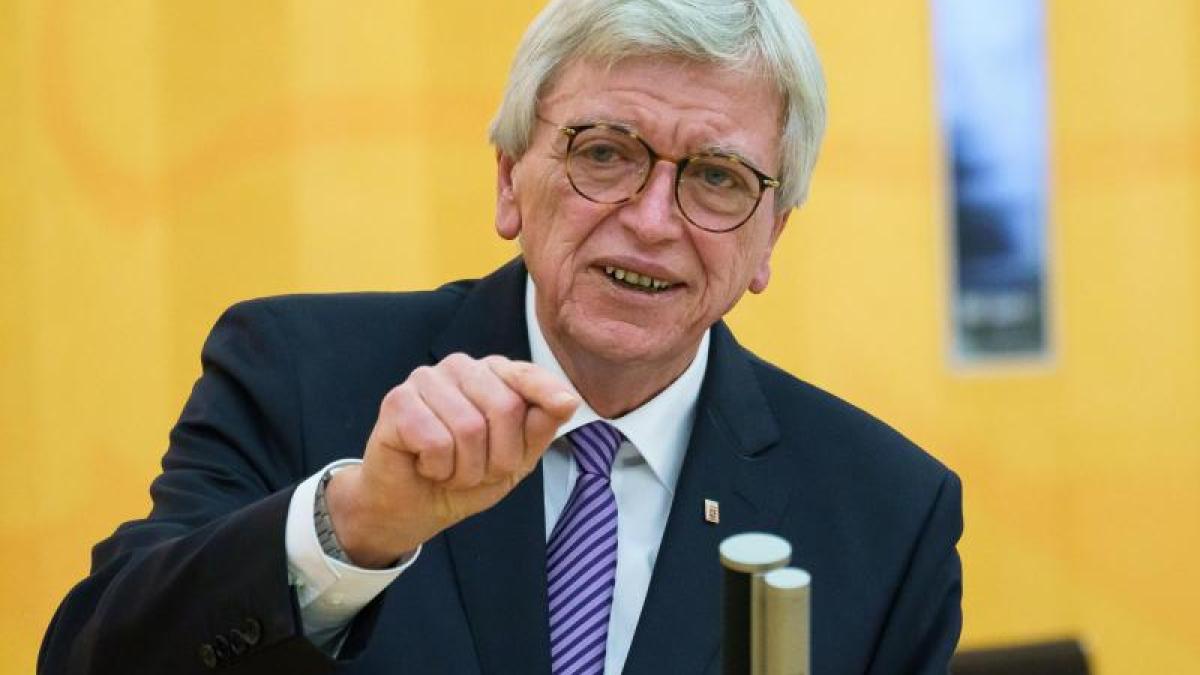 There is a pleasing decrease in infections, he said on Tuesday in the state parliament in Wiesbaden.

However, careless behavior should not risk a possible third lockdown.

The corona pandemic is far from over.

So far, the corona lockdown with a comprehensive shutdown of public life and massive contact restrictions initially applies until February 14th.

The federal and state governments have agreed that easing should only be possible if the total number of new infections per 100,000 inhabitants falls below 50 within a week.

However, a plan is already being drawn up which describes the respective easing in stages, announced Bouffier in his government statement.

This plan corresponds in its systematics to the six-stage escalation concept presented in July last year.

In a first stage, with a seven-day incidence with a significant and stable approach towards 50, there will be the first reliefs and openings.

If the seven-day incidence is stable below 50, the next level will come.

In the case of a guaranteed seven-day incidence of less than 20, which is strongly recommended by science, a further step follows, explained the Prime Minister.

Corresponding opening steps should then follow in accordance with this system.

The levels included regulations on contact restrictions, opening of shops, body-friendly services as well as events, sports, culture and the catering and hotel industry.

The CDU politician emphasized that such a plan would only be decided after the next Prime Minister's conference with the federal government.

It makes little sense if, for example, the shops in Wiesbaden open while they remain closed in Mainz.

There should be as consistent a procedure as possible in the federal states.

If the pandemic allows, plans to switch classes in elementary schools in Hesse after February 14, said the head of government.

For example, it was "a scandal" that after 300 days of Corona there was still no functioning school portal, said the chairman of the SPD parliamentary group.

The video function necessary for distance learning is still not running and there is a lack of digital devices everywhere.

The Hessian contact restrictions to contain the pandemic are partly incomprehensible - for example because of a "de facto ban on contact for children".

The requirement that members of a household are only allowed to meet one other person means that daycare children hardly see their friends, Faeser said.

Because children of this age do not meet on the playground without being accompanied by one parent.

"At least four people come together - and that is not allowed in Hessen."

It is understandable that mistakes would be made in the exceptional situation of a corona pandemic, Faeser admitted.

However, the state government must also openly state “what went bad and has to be different”.

But the state government refuses to accept this responsibility.

The SPD parliamentary group leader criticized the start of the vaccination campaign, on which all hopes were directed, that Hesse stumbled.

Overloaded telephone lines, a complicated Internet portal for vaccination registration and fully equipped vaccination centers in idle mode - none of this has helped to increase vaccination readiness.

The FDP parliamentary group leader René Rock called for concrete perspectives for a relaxation of the corona rules.

«We shouldn't just talk about the virus, but about the people.

We shouldn't scare them, but give them hope and confidence. "

Most of the citizens, but also the companies, behaved in an exemplary manner, adhered to the rules and developed creative solutions.

"What doesn't work is the state," said Rock.

«He poorly prepared and equipped the schools.

Health authorities are still overloaded and old people's homes are also being left in the lurch. "

The AfD MP Volker Richter criticized: "Anyone who creates regulation after regulation, which at some point only the authorities themselves can understand, does not contain a pandemic, but just wants to create the appearance."

The AfD is campaigning for the opening of large parts of the trade in compliance with hygiene regulations.

The leader of the left-wing parliamentary group, Janine Wissler, called for the burden of the lockdown to be distributed more fairly.

“It is unacceptable that the event industry, cultural workers and showmen have de facto been banned from activity for almost a year,” she said.

On the other hand, other companies shied away from investing in order to enable their employees to work from home.