Clowns, glitter and the police: in Avignon, the "open theaters" operation prevented - France 24

Clowns, glitter and the police: in Avignon, the "open theaters" operation prevented Avignon (AFP) "We were ready, the audience was there, and nothing happened": in a spangled jumpsuit on the stage of the Théâtre de l'Oulle in Avignon, the actress Alice Benoit was moved. In the midst of a health crisis, a symbolic "open theaters" operation was interrupted by the police. It should have been "a meeting, a moment of emotion between a very beautiful show and the public", after month 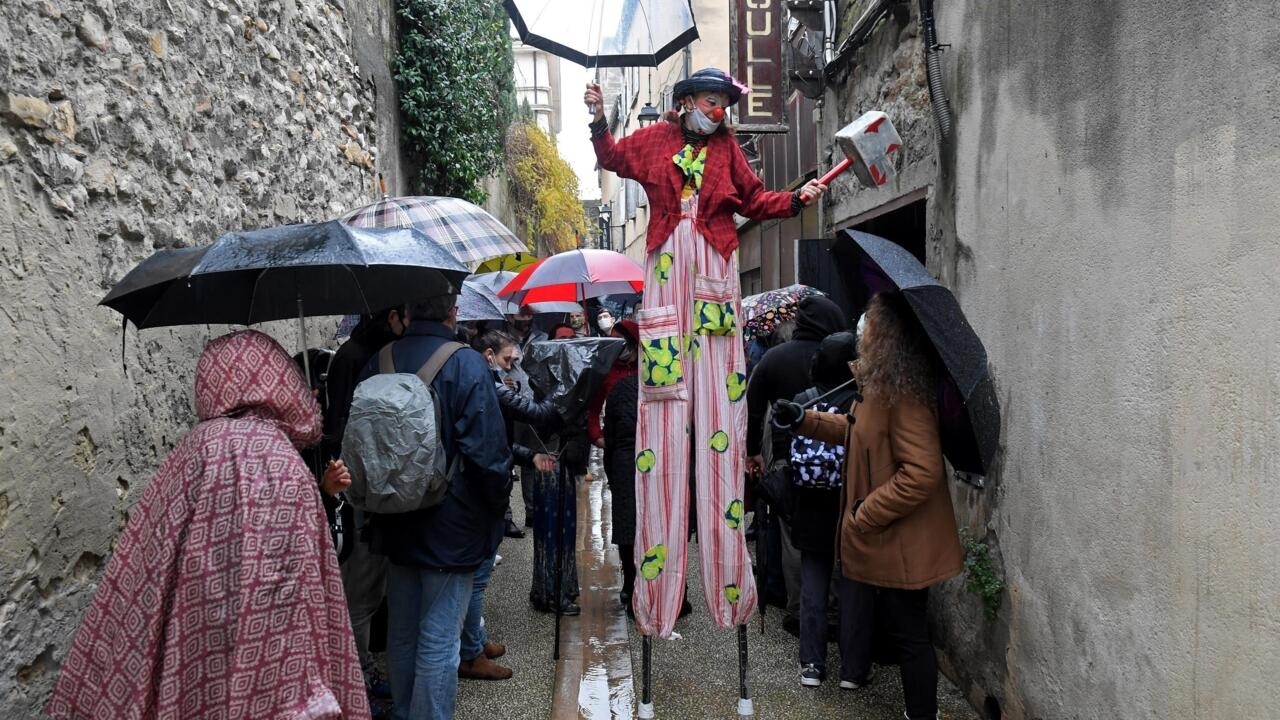 "We were ready, the audience was there, and nothing happened": in a spangled jumpsuit on the stage of the Théâtre de l'Oulle in Avignon, the actress Alice Benoit was moved.

In the midst of a health crisis, a symbolic "open theaters" operation was interrupted by the police.

It should have been "a meeting, a moment of emotion between a very beautiful show and the public", after months of closure because of the health crisis due to Covid-19, in the words of Laurent Rochut, artistic director de la Factory, a network of places dedicated to the practice and representation of the performing arts in Avignon.

It was at his call that around forty theaters in France, including nine in Avignon, were to participate on Saturday in the event which consisted, for only one hour, of opening the doors of the theaters to spectators to allow them to attend short performances.

Despite the pouring rain, in the little street of the Théâtre de L'Oulle, several dozen people, soggy but joyful, were waiting for the doors to open to the sound of a guitar, singing in chorus "Sentimental crowd" by Alain Souchon or again "Say yeah".

But quickly, five police officers come to stand at the entrance of the theater.

"We weren't under any illusions", admits Laurent Rochut, who believes that "it was a game of cat and mouse between the authorities and us, from the moment we publicized the event".

The actors of the company Les Lucioles, from Compiègne (Oise), pass a head through the door to thank the public for coming: "You are touching, thank you!", Launches an actress.

A clown perched on stilts, equipped with a huge foam hammer, provokes smiles despite the rain and the failure of the demonstration.

Among them, Odile Duperret, English teacher, came "out of solidarity, conviction and love of the show".

Claude Polian, 83-year-old pensioner, adds: "we went to the Utopia cinema in Avignon between the two confinements, there were all the security measures, the masks, the distances, while when we go to the supermarket people are key and touch ".

In the theater, everything was ready to welcome the spectators, with a seat away from each other.

The technicians put away, weary, the equipment deployed for the performance.

On stage, the actors are seated, made up, costumed, gazing into space.

Despite the disappointment of not being able to play, Alice Benoit, actress, is happy to have seen the audience: "It gives you energy to see them, to see that there are people waiting for us, outside" .

She hasn't performed for a year - "and I expect not to play another year again, it's hard sometimes to get up in the morning, theaters are calling one after another to postpone the scheduled dates" , she confides.

Laurent Rochut warns of "a mass extinction" of "all these companies which will not recover, which will die because the system with which the government supports them is not suited to the situation".

"Most will not play again before the summer (...) the government must change the way it compensates companies, on the basis of the contracts they have signed and which have been canceled", asks t -he.

Already on January 16, several hundred people demonstrated in front of the Palais des Papes in Avignon to demand the reopening of cultural venues.

The next Avignon International Theater Festival is scheduled to take place from July 5 to 25.

Capital of the theater every July, the City of the Popes was deprived in 2020 of its 150,000 visitors who are fans of the performing arts, due to the Covid-19 epidemic.

Instead, the Festival had reinvented itself as an "art week" at the end of October, which itself had to be cut short due to the second confinement.