The Design Giants series tackles today the 1966 mining accident in Aberfan, Wales. Section 4 of the Design Giants series deals with two tragic mining accidents. The first took place in 1966 in Aberfan, Wales. The rains of October had whipped the mining village of Aberfan for a week. The schoolchildren’s fall vacation was about to begin on Friday, and all the students were looking forward to it. For the morning opening, all things Bright and Beautiful had been practiced hard. T 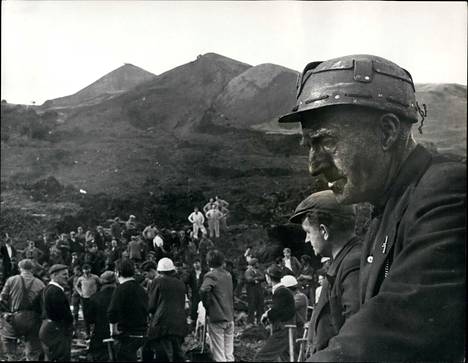 The first took place in 1966 in Aberfan, Wales.

The rains of October had whipped the mining village of Aberfan for a week.

The schoolchildren’s fall vacation was about to begin on Friday, and all the students were looking forward to it.

For the morning opening, all things Bright and Beautiful had been practiced hard.

The waste heaps from the Aberfan coal mine were located on the outskirts of the village on a mountainside.

On top of one of the largest piles, a collapse was observed in the morning, which suddenly increased.

There was a roar as the waste material, which had partly become sludge due to rain, began to move towards the village at an increasing speed.

Garbage gravel covered some of the buildings on the hillside and hit the school with terrible force.

The building was destroyed, and most of the students were buried alive.

A total of 144 people were killed.

There is a matter-of-fact approach to the interesting and thorough Design Giants program, but tears cannot be avoided when you look at old authentic images of children playing in the school yard, a line of coffins, and grieving people.

- We heard a noise reminiscent of thunder or the jet of a jet engine.

I looked out the windows at the rubbish heap and saw the black mass penetrating the category.

I was buried chest and gravel down to my chest, describes former student Gerald Kirwan, 62.

Realizing he was alive, he watched what happened to his classmate Paul.

- His head rested on my shoulders.

He was still next to me.

Blood was bleeding from Paul's nose and mouth.

I tried to talk to him.

He did not answer.

When Aberfan is told, it is also remembered how Queen Elizabeth II did not immediately go to the scene to comfort the people, even though the counselors asked her to do so.

Episode 3 of the 3rd season of the high-quality The Crown series is a moving story about Aberfan.

At the same time, the decision of the queen acted by Olivia Colman not to visit Aberfan is being discussed.

The reason he states in the episode of the series is that he does not want to divert attention from relatives and complicates rescue work.

In the Aberfan episode of The Crow series, Queen Elizabeth is played by the skilled Olivia Colman. Photo: Des Willie

The media interpreted the Queen’s solution as communicating coldness and arrogance, and the people were not on different lines.

Within days, the Queen's mind changed and she left for Aberfan to meet families.

The visit was touching.

According to the court's close circle, the post-accident delay still plagues Elizabeth.

The villagers had repeatedly warned the National Coal Board that the waste mountain was too high and dangerously placed on top of an underground source.

The Coal Council withdrew from responsibility and blamed the natural phenomenon.

The clearing of the village had to be paid for by the disaster fund.

The National Coal Board was later convicted of the accident.

The funds were also returned to the fund.

What did humanity learn?

Nothing under the Design Giants program, as a comparable disaster occurred in Brumadinho, Brazil, just a few years ago.

The waste from the iron ore mine owned by Vale was stored in a large artificial lake with a dam built of waste land.

It broke down during a workers ’lunch break, and a restaurant full of people was buried in the slurry.

Toxic sludge spread to the residential area, cut off roads, spilled onto crops and into the river, causing 115 deaths and a shocking environmental problem.

Design giants on Thursday at TV2 at 8.15pm as well as The Crown, Season 3 of Netflix