The neighborhood where this street is located was built in the late 1990s, long before the real estate mogul entered politics. 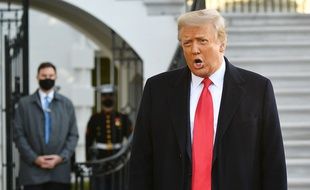 Donald Trump when he leaves the White House on Wednesday.

In Canada, residents of an Ottawa neighborhood seek to distance themselves from Donald Trump by renaming their street named after the former president, now a source of embarrassment since the Capitol riots.

Trump Avenue is located in the west of the Canadian capital, in the Central Park neighborhood.

The latter, which bears New York-themed street names, was built in the late 1990s, long before the real estate mogul entered politics.

This week, a city councilor, Riley Brockington, began to mobilize with the residents of this street.

Some of them had asked the city for years to change the name, but the latter explained that he was braking four irons during the term of the former president, for fear of possible reprisals.

Half of residents agree

"I feared that there would be consequences against the country, that Trump would take punitive measures if we learned that the capital of Canada wanted to remove its name from a street sign," said Riley Brockington.

"With his departure from the White House, I felt it was the right time to try," continues the elected.

If 50% of the residents on the street agree to a name change, the city will begin the process which could take several months.

So far, the trend is "in favor of a change", assures the city councilor.

To rename Trump Avenue would require changing the signs, cards and mailing addresses of the 62 houses and agreeing on a new name.

Canada: The ultranationalist organization "Proud Boys" soon to be a "terrorist entity"?