Comment: The Jesse Puljujärvi trail is now open in the NHL - but the most important one is still missing

Jesse Puljujärvi has shown that he is ready for the NHL. Next, you should take advantage of the power points hanging in the air, writes Ville Touru. 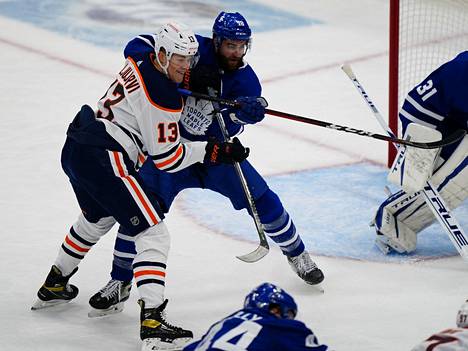 The sample is still small, but still large enough that Puljujärvi, 22, has proven to be a completely different man than on his previous visit a couple of years ago.

Puljujärvi is part of the NHL.

The 193-centimeter from Tornio is no longer a hontelo ribcet, but a bull-like rump, with its powerful skating and reach, it is an awkward resistance for anyone.

Puljujärvi has never slipped from its work ethic during the early part of the season.

He no longer drifts out of the game, as before, but constantly rushes resolutely straight to the core.

Jesse Puljujärvi (left) has really not been upset.

However, the points balance of eight matches is still lean 0 + 2.

It does not tell the whole truth about Puljujärvi's grips, but at the same time it tells us what else to look for: in order to establish the place of the result chain, a result must also be made.

Puljujärvi first proved its reliability in the triple chain.

Now, for the past two games, he has had a cool edge in Edmonton Oilers ’No. 1 chain alongside Connor McDavid and Ryan Nugent-Hopkins.

The chain has worked well and created several dangerous situations for the attacking head.

When the chain is on level field ice, the ratio statistic (xGF%) for both Oilers and opponents is 77%.

This means that the Puljujärvi chain has been waiting for the finish on the neck at a ratio of almost 80–20 to the opponent.

Puljujärvi's corresponding personal reading for the eight games of the season is an excellent 64%.

It is clearly the third best of the entire Oilers after McDavid and Nugent-Hopkins.

Puljujärvi has been a bit unlucky in terms of its modest scoring.

In Sunday’s match against Winnipeg, he scored one pass, but with the slightly luckier bounces, he could well have scored even three.

It was probably the best game of the Puljujärvi Oilers career.

Also in Wednesday morning’s match, Puljujärvi had one thousand bucks place, in addition to which he served another top spot for McDavid.

Puljujärvi has become a strong goal-scoring player, and he is also determined to do so.

From the place, Puljujärvi has already proven three Oilers goals from close range in the last two games - without getting a single power point.

And the speeches have not been just warm chatter.

The credit for Puljujärvi is shown above all by the fact that in the last two games he has been the fourth striker on the ice with McDavid, Nugent-Hopkins and Leon Draisaitl in the final moments when the Oilers have furiously applied for a goal.

In the grips of Puljujärvi, everything suggests that the number result would also start to come by force.

This brings together the biggest question and the next step in Lake Puljujärvi in ​​the NHL conquest, which has been modeled so far.

The venues - which come alongside McDavid - need to be much sharper.

While all the advanced statistics would look great, the most important and ultimately the only relevant statistic will appear on the scoreboard.

The paint hanging in the air would also be good for self-confidence in the Guarantee.

However, based on what has been seen, Puljujärvi has all the lunches to establish a place in Oilers' top chain.

The weak platform situation of the team as a whole is also currently raining on the Finns.

Even outside the trough, Puljujärvi is now a different man than last time.

The English language, which had been badly tangled in the past, is already slipping much better.

Puljujärvi himself has admitted that his badly deficient language skills made it difficult to get into the team last time.

Now Puljujärvi is much more mature in the NHL in every way.