The EU Corona Revitalization Fund will soon receive a blessing from Parliament. After that, let Finland be permanently prepared to pay ever larger income transfers, writes special journalist Jan Hurri. 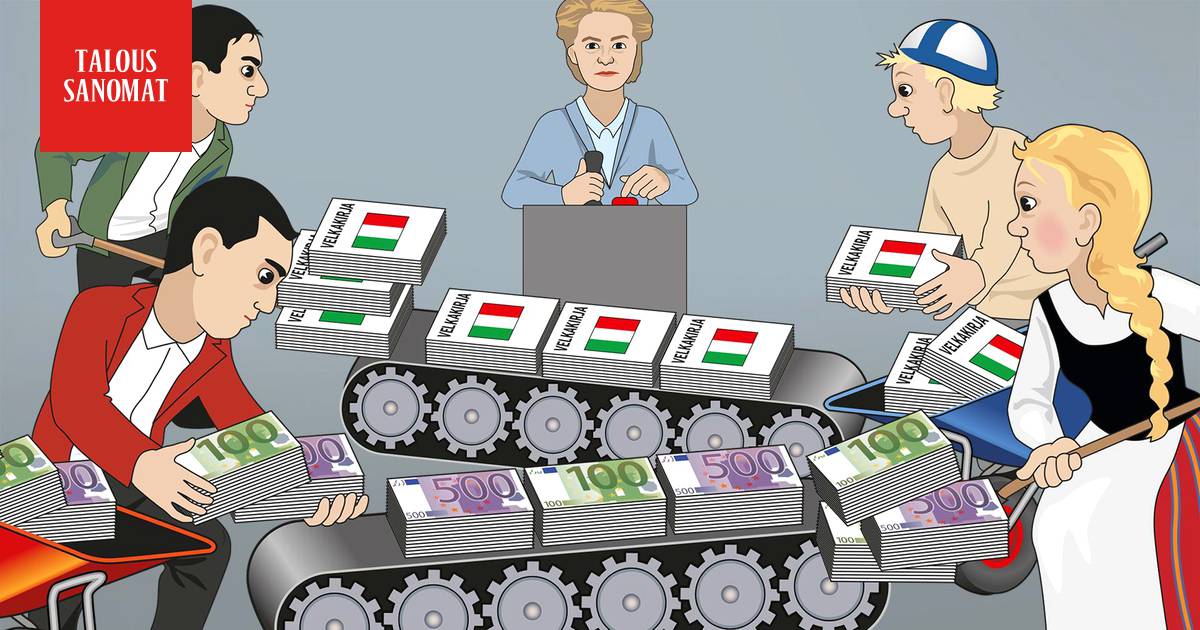 Parliament will soon have the opportunity to give its formal blessing to Finland's financial contribution to the EU's multiannual financial framework.

At the same time, the Parliament is tying Finland to the EU's controversial corona recovery fund and repaying its large debts for decades.

Formally, MPs will be presented with a government proposal on "national ratification of the EU's own resources decision".

But in essence, it is a question of Finland's commitment to a radical change in the form and operating principles of the EU, as well as to a radical reinterpretation of the treaties that were previously considered almost sacred.

And in practice, committing to the stimulus fund and its debt financing means Finland's commitment to permanent and ever-increasing income transfers.

Income transfers and increased solidarity between EU countries can in themselves be justified and supported on just as valid grounds as they can be opposed.

Opposite horizontal cups have both political and economic values.

But now income transfers and solidarity are to be increased in a way and on grounds that can easily leave smoky ingredients of dispute and disagreement for years to come.

In Finland, the government has marketed the stimulus fund to the public and MPs in turn by characterizing the arrangement as a necessary but only temporary and temporary means to remedy the economic disadvantages of the interest rate crisis in a way that benefits the Finnish economy and fully complies with the Treaties.

By the middle of the century, it should be clear that none of those marketing claims fully resembled itching.

The Recovery Fund is a special Union financial instrument set up outside the EU budget to finance budget expenditure with the largest joint debt in the EU's history.

The Recovery Fund is to seek funding from the financial markets, starting with EUR 750 billion, to be distributed to Member States in the form of grants and semi-free or free loans.

Grants and subsidies are to be distributed to Member States over the next few years, but the debts incurred by the EU for this purpose are to be repaid by 2058.

The arrangement, which has been in force for more than 40 years, can of course be considered temporary, but hardly temporary.

A moderate number of key economic and monetary actors in the EU and EU countries have already proposed making the fund permanent.

If and when the temporary fund eventually becomes permanent, this should not be a big surprise in Finland either.

After the interest rate crisis, new crises and compelling needs for income transfers are guaranteed to emerge before the stimulus fund is dismantled.

And once the debt ban, previously sacred in the Treaties, is once - and will be - ironically - as the stimulus fund is supposed to do, it will be more tempting to continue and strengthen the leverage in time than to dismantle it.

Apparently, one of the unspoken aims of the stimulus fund is to permanently strengthen the EU's "fiscal capacity".

Otherwise, there would be no point in legalizing the Treaties and the rather cumbersome and legally "innovative" structure of the Recovery Fund, as just as far-reaching support measures could have been implemented without the controversial reinterpretations of the Treaties.

Even the necessary coercion dictated by the interest rate crisis, and the economic benefits for Finland, are not credible grounds for such an arrangement.

The support from the Recovery Fund is to be distributed to the Member States for the most part on the basis of economic indicators other than interest rate disadvantages.

Most scholarships go to those Member States whose economies and employment were already weaker than the EU average before the interest rate crisis.

Support for such countries can, of course, be justified, for example, by the fact that their public finances are often more indebted than the average EU country and therefore their national recovery capacity and willingness are lower than average.

Most of the money is to be spent on promoting the "green transition" and "digitalisation" of the economy.

In other words, to sites that have nothing to do with the corona - and which EU countries should in any case promote with their own help.

At Finland's request, even a small part of the stimulus fund's grants will be distributed in connection with the economic disadvantages caused by the interest rate crisis.

There is a swallowing of government ministers here as well.

Last week, Minister Annika Saarikko (center) criticized the reduction of Finland's grants as unfair; this week, Minister Tytti Tuppurainen (sd) has reminded that this is exactly what should have happened.

However, it is not yet possible to talk about a government crisis.

The situation is different in Italy, where the government had already crashed into controversy over the stimulus fund.

In Italy, a government crisis erupted over grants

The Recovery Fund is in many ways a controversial and radical structure, which has still been the subject of a muted and mostly evasive debate, at least in Finland, even at its busiest.

This is despite the fact that Finland has a decades-long and possibly permanent role as a net contributor to the payment of the fund's income transfers and joint debts.

Finland is one of the relatively large net contributors to the stimulus fund, whose own finances did not benefit much from the fund's income transfers.

Italy, on the other hand, is one of the largest net beneficiaries of the fund, for whose economy the transfers from the fund are not only useful but also necessary.

Still, last week, the Italian government, and by no means the Finnish government, had already collapsed due to controversy over the stimulus fund.

On Tuesday, the situation tightened to the point where Prime Minister Giuseppe Conte announced his resignation.

Of course, the Italian government crisis did not ignite the fund's suitability for EU agreements or the cost of the arrangement, but whether the billion-dollar subsidies promised to the country will be used to finance tax cuts or, in part, to rehabilitation projects.

The Italian government crisis might otherwise be lame, but in a net contributor like Finland, a vile smile could soon coagulate.

Italy is one of the six original founding members of the EU, its economy is the third largest in the Union and its public finances are by far the most indebted to all Member States.

Already at the time of the euro crisis, the financial markets came to the clear conclusion that the Italian state would never be able to pay off its debts on its own without, in one way or another, income transfers financed by other EU or euro countries.

The central bank of the eurozone, the ECB, has long been the largest financier of the Italian state, so it seems to have come to the same conclusion - and the fear if Italy "collapses" is spending the euro.

The next step is for net contributors like the EU and Finland to take action, starting with a "temporary" stimulus fund.