The sports world was shocked on January 26, 2020, when a helicopter carrying Kobe Bryant and his 13-year-old daughter was involved in a fatal accident. 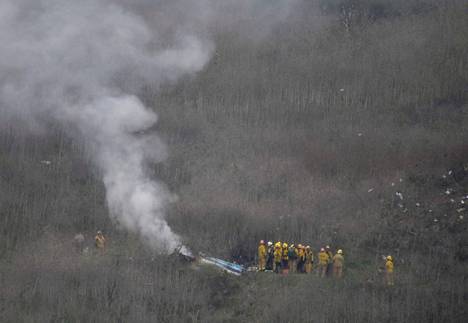 It will be exactly one year since the death of basketball legend Kobe Bryant on January 26th.

Bryant died at the age of 41 in a helicopter crash in California in which his 13-year-old daughter Gianna and seven others were killed in addition to him.

Bryant was on his way to a Gianna basketball game, but the trip ended with a helicopter crash.

There were also Gianna's playmates and their parents aboard the shuttle helicopter.

The weather conditions were really bad at the time of the accident.

The news of the accident shocked around the world in January 2020, and in addition to ordinary citizens, numerous athlete stars across sport boundaries expressed their condolences.

The accident investigation is still ongoing, and even in the 1800-page report published last summer, only parts of the discussion between the pilot and air traffic control were published.

There were a total of four children, all girls, in the family of Los Angeles Lakers legend Bryant and his Vanessa wife.

Of the remaining daughters, Natalia is now 18 and Bianka is 4.

The family pit Capri was born in the summer of 2019, half a year before his father’s fatal accident.

Vanessa Bryant described her grief two weeks after the accident on Instagram as follows:

- My brain refuses to accept that both Kobe and Gigi are gone.

I just can’t handle these two things at the same time.

I try to understand Kobe’s death, but my body just refuses to accept that Gigini will never come back.

Why am I allowed to wake up to a new day when my girl is not allowed to do the same!

He had so much life ahead, he wrote.

Later in the spring, Vanessa Bryant posted on Instagram a video of the family’s first steps as Capri’s daughter.

Capri shed light on the darkness, though his father and sister were not sharing that touching moment.

Kobe and Gianna were buried in a small-scale private event, but a commemorative event later in honor of Kobe at the Los Angeles Lakers home hall was attended by 20,000 people.

A grief-stricken widow and mother who lost her child, Vanessa Bryant, gave a touching speech at the memorial service.

- I want my daughters to remember how great a personality, husband and father she was.

He was a man who wanted to teach future generations to be better and not to repeat his own mistakes, Vanessa Bryant said.

- I didn't see him as a celebrity or an amazing basketball player.

She was my dear husband and a great father to our children.

He was everything to me ... and loved me more than I could put into words.

Kobe Bryant is considered one of the best basketball players of all time.

He left behind a worldly giant fortune.

Last spring, the financial magazine Forbes estimated that the player would have earned as much as $ 680-770 million during his career (at the current rate of about 560-634 million euros).

Vanessa Bryant and her mother Sofia Laine in 2020 in violent quarrels.

The situation escalated in December, when Laine sued her own daughter.

He is demanding millions in compensation from Bryant’s family for “years of unpaid work” in front of the family.

In the lawsuit, Laine claimed to have acted as the family’s personal assistant and babysitter and to have had to work according to the precise schedule required by Vanessa Bryant.

Laine has claimed hundreds of millions in assets from his manageable daughter, $ 5 million, houses and a Mercedes SUV.

Laine has also said that Kobe Bryant had promised before his death that he would take care of the mother of his children for as long as he lives.

The woman has also claimed that her daughter has done everything possible to prevent it.

Vanessa Bryant has stated in her press release that her mother’s allegations are a complete lie.

According to the daughter, the mother is trying to get access to Bryant's family's money with a cane.

Last October, the Lakers returned to become NBA champions after a ten-year hiatus and took first place in memory of their legend.

- After the tragedy, we just wanted to win because of Kobe.

We did not betray his trust.

I know he looks at us from above and is proud.

He was a big brother to all of us and we did this for him, Lakers star player Anthony Davis told ESPN.

Kobe Bryant (1978–2020) was one of the best basketball players of all time.Photo: USA Today Sports