England: Manchester City takes the lead London (AFP) Manchester City seized the lead in the Premier League on Tuesday by going very easily to win at the penultimate West Bromwich Albion (5-0) on Matchday 20. - Man City without mercy for West Brom Pep Guardiola's men did not half-measure when temporarily taking the lead in the standings by crushing the promoted (5-0). City are one point ahead of United who move to red lantern Sheffie 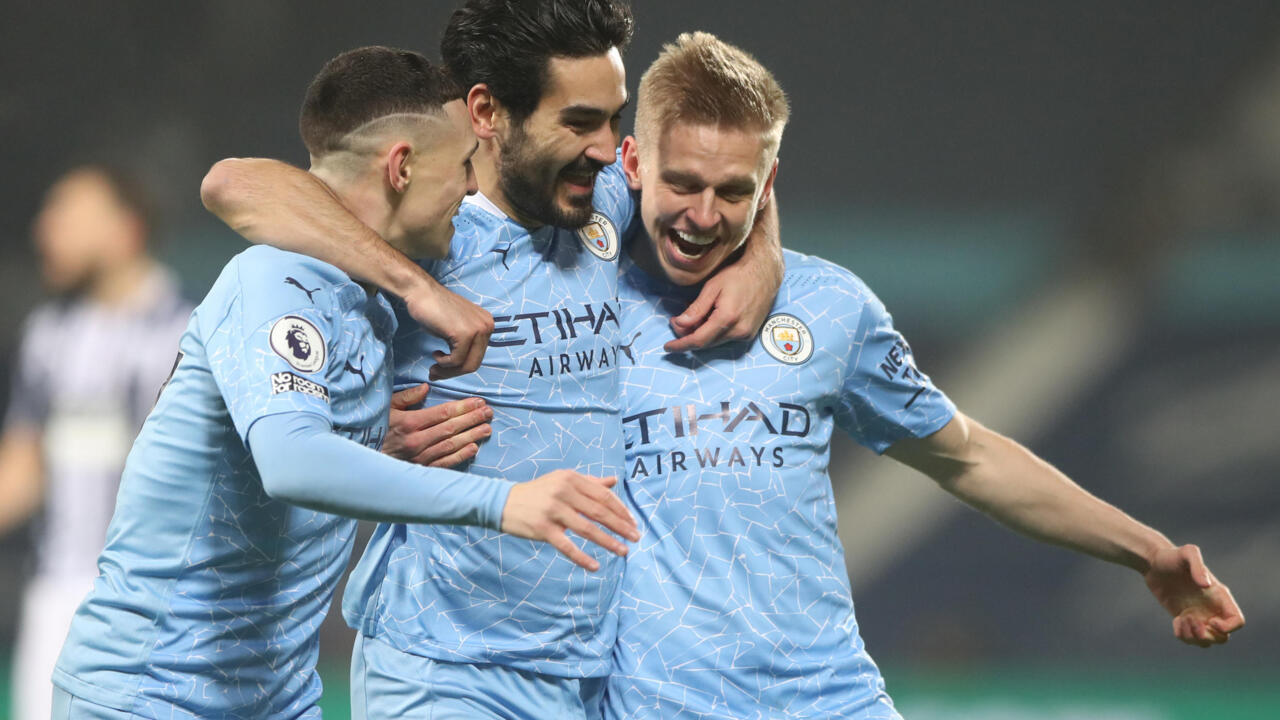 Manchester City seized the lead in the Premier League on Tuesday by going very easily to win at the penultimate West Bromwich Albion (5-0) on Matchday 20.

Pep Guardiola's men did not half-measure when temporarily taking the lead in the standings by crushing the promoted (5-0).

City are one point ahead of United who move to red lantern Sheffield United on Wednesday.

But the Sky Blue still have one game to go.

The case was already folded at the break (4-0) under the leadership of an Ilkay Gündogan in very good shape for a few matches and which completely made us forget the absence of Kevin de Bruyne on injury.

The German midfielder scored a brace (6th, 30th), interspersed with a goal from Joao Cancelo (20th) on which the West Brom defense had stopped playing because the assistant referee had raised his flag, without the referee blowing his whistle, before being contradicted by the VAR.

Riyad Mahrez (4-0, 45 + 2) added to the score just before the break before Raheem Sterling also left his goal (5-0, 57th) making this match the 5th in a row at home where WBA concede at least three goals.

Since 1978, no team of the English elite has shown themselves so permeable at home and the promoted seems to be returning straight to the Championship.

Without making noise, West Ham continues its path with a success at Crystal Palace (3-2) which allows him to kick Liverpool out of the qualifying places for the Champions League.

A very provisional state of affairs, since Everton, 7th at three points, could overtake them in the event of a victory against Leicester (3rd) on Wednesday, while Tottenham or Liverpool will necessarily go ahead after their meeting on Thursday.

But under the orders of David Moyes for almost a year, the Hammers develop a pleasant and effective game served by a group without a star but determined and involved.

During this London derby, West Ham reacted well to the opening of the quick score of Wilfried Zaha (1-0, 3rd).

Czech midfielder Tomas Soucek confirmed that he was an excellent recruit in the last winter transfer window by scoring his 6th and 7th goals of the season (1-1, 9th and 1-2, 25th) to put his team in front.

Particularly interesting to watch will be West Ham's next game, which will host Liverpool.

Released this weekend of the FA Cup of which he was defending champion by Southampton, Arsenal took revenge by going to win in the south of England (3-1) in the league, in Southampton, thanks to a goal and an assist from Alexandre Lacazette.

These three points replace the Gunners in 8th place, 5 points from qualifying places for the Champions League, while the Saints switch to the second half of the standings (11th).

The game had started badly, however, badly for the Londoners, Lacazette missing from the first minute a face-to-face with Alex McCarthy before, less than 120 later, Nicolas Pépé forgets to mark Stuart Amstrong who volleyed a tense corner James Ward-Prowse to open the scoring (1-0, 3rd).

But Arsenal, reinforced by its 4 victories in the last 5 days, was able to react quickly by Pépé who made up for it by equalizing after a ball recovered from a good pressing from Lacazette (1-1, 8th).

Lacazette, still him, with a pass full of spontaneity, then launched Bukayo Saka who dribbled the goalkeeper out on an adventure to score in the empty goal (2-1, 39th), before being at the reception of 'a center from Saka, who returned politeness to him, to ensure a deserved success (3-1, 72nd).