Over the decades, “Painter-Peter” has appeared in films and TV series. In a series made in the 2010s, he escapes on the Titanic toward the United States. 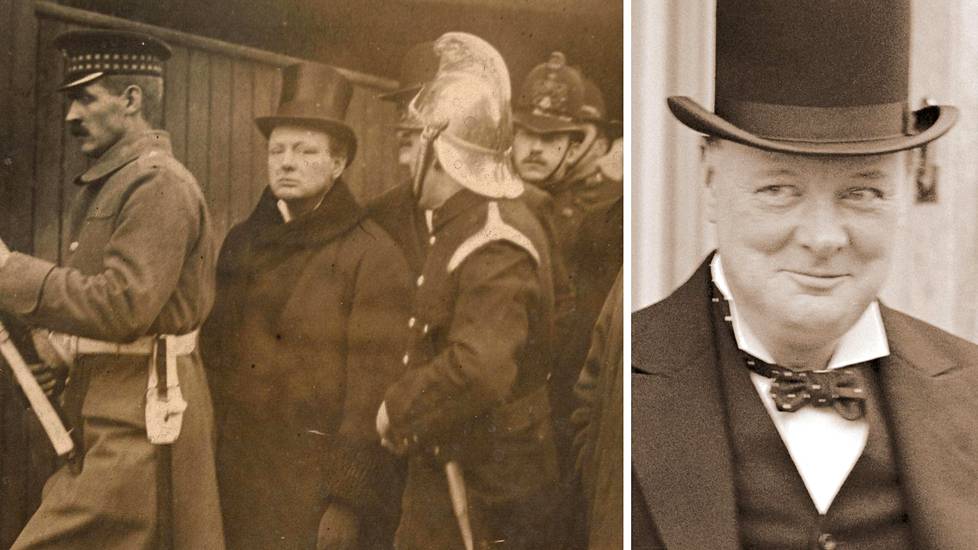 Winston Churchill was in the bathtub when he was rushed.

London police besieged the house where the criminals fired at them.

It required the permission of Secretary of the Interior Churchill.

It was January 3, 1911. Churchill himself rushed to Sidney Street in East London.

The action fascinated him.

Churchill, 36, was a former professional soldier, a veteran of many battles.

Winston Churchill is remembered as Prime Minister of World War II, but he was already a prominent politician in the 1910s.

On the left, Churchill follows the events on Sidney Street. Image: Wikipedia

Upon arrival, Churchill heard the facts.

Police had gone in the morning to arrest the residents of the house who wounded one of them.

The matter was taken seriously, as the same group had previously killed three police officers and wounded two.

A couple of weeks earlier, police had surprised a number of burglars in a gem shop.

These had opened fire.

One of the robbers also got hit by his own bullets.

Comrades helped him with him to safety and called a doctor for help.

However, they refused to take the wounded to the hospital.

The doctor reported the case.

George Gardstein was mortally wounded in a robbery robbery.

Based on the deceased's papers, he was identified as a Latvian who used the name George Gardstein.

He had belonged to an anarchist group called the Flame, whose other members began to be arrested.

Together was a picture of a handsome young man known to friends as Peter Piaktow, “painter-Peter”.

Even after 110 years, his identity is uncertain.

According to the author Philip Ruff, Peter was Janis Zhaklis from Latvia.

He was among those who robbed the Helsinki branch of the Russian National Bank in February 1906.

It was located at Pohjois-Esplanadi 7. The house is now the Swedish Embassy.

The robbers were as ruthless as in London a few years later.

They killed the janitor.

The crowd dispersed as they fled.

In Kerava, its members killed police.

A large catch was taken to Tampere.

There, police grabbed one of the men.

At the police station, the man pulled out his hidden weapon.

Two police officers and a firefighter were killed.

The money had been handed over to Nikolai Buren.

Buren performed in the city as a pianist, but was a member of the Bolshevik Party battle group.

It has been considered probable that the party leader Lenin himself had approved the plan in Helsinki.

It was the usual way to raise money for political work.

Latvian subversives were considered the toughest, and they were given such missions.

The office of the Russian State Bank, located on the Helsinki Esplanade, was bloodily looted in 1906. Now the Swedish Embassy is located in the building.

In January 1911, the siege of Sidney Street was extended.

The soldiers fought a firefight with the besieged.

Smoke began to rise from the building.

The fire department was alerted to the scene.

However, Secretary of State Churchill denied extinguishing the fire.

“I thought it better to let the house burn than endanger good British lives because of those bloodthirsty villains,” he argued.

It wasn’t until the roof collapsed that firefighters went in.

The wall collapsed and one firefighter suffered fatal injuries.

It was a media case, as a new instrument film camera had recorded events.

Police, soldiers, and most of all, the bumpy-headed Churchill got into the news coverage of movie theaters.

He was accused of public trickery.

The infamous robbery of a jewelery shop took place in December 1910. Three police officers were killed in connection with the robbery.

Firefighters search the remains of the besieged house.

One of them was killed when a wall collapsed. Image: Wikipedia

Churchill was liberal at that point in his career and was attacked by conservatives in particular.

- I understand what the cameraman was doing on the spot, but what was it about this respected gentleman there, their leader Arthur Balfour wondered.

Churchill himself later admitted to being a little too excited.

They were brought to justice.

Police had investigated when obtaining evidence.

Only Nina Vassileva received a brief verdict, which was later overturned.

Among those released was Jacob Peters, cousin of the deceased Svaars.

It has been alleged that it was Peters and Gardstein who killed police officers in a jewelery shop.

No trace was found in Painter-Peter.

In East London stories, he developed into a master criminal who escaped a fire he set himself on fire.

Perhaps it was Vesa of a good family, a painter on the path of crime and subversion?

In East London stories, painter-Peter developed into a master criminal who escaped a fire he set himself on fire.

Peter received observations from around the world.

They came from both Naples and Winnipeg.

London was answered and complained that there was no evidence.

According to some perceptions, Peter aka Janis Zhaklis left the revolution and became a businessman in Australia.

According to another theory, Peter would have been Gederts Eliass, who also participated in the robbery of Helsinki in 1906. According to the cynics, the whole man did not even exist, but the London police made a mistake here as well.

Over the decades, painter-Peter has appeared in films and TV series.

In a series made in the 2010s, he escapes on the Titanic toward the United States.

East London has an apartment building named after him.

In 1917, he became one of the most feared commanders of the Lenin Secret Police in the Czech Republic.

Sources: the Economist, Richard Toye: Winston Churchill - a Life in the News, Ministry of Education Commission: Lenin in Finland