The lost memories of Chet Baker in an online theater show

Streaming from the Teatro della Regina in Cattolica, available until Sunday 24 January, with Fabrizio Bosso on trumpet, Julian Oliver Mazzariello on piano and with Massimo Popolizio narrating voice 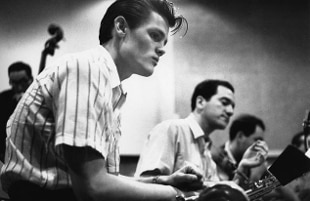 that Roberto Andò brought on stage for the first time in Italy, and that from Mercadante made his TV debut on Rai5, behind the scenes of

Moby Dick at the test

, the new show by Elio De Capitani, taken from Orson Welles and Herman Melville, who reveals some of his secrets online to Elfo Puccini.

Even this weekend, the theater is still closed but with audiences online, in streaming or on TV.

Still available until today for free one of the shows, also visible on YouTube, presented in its virtual season by Ater Fondazione,

, with Fabrizio Bosso on trumpet, Julian Oliver Mazzariello on piano and with Massimo Popolizio narrator.

"The lost memories is the title of the diary of a life written by Chet Baker, found ten years after his mysterious death that Fabrizio Bosso, Julian Oliver Mazzariello and Massimo Popolizio interpret and reread".

Baker's notes are "returned by Fabrizio Bosso's trumpet and his words by Massimo Popolizio's voice, in an artistic encounter that evokes the figure of the 'cursed' jazzman, progenitor of cool jazz, whose presence is tinged with legend among talent , excesses and intimate torments ".

"On May 13, 1988 Chet Baker died falling from a window of the Prins Hendrik Hotel in Amsterdam, at the end of a life that resembles a mad rush between music, heroin, in and out of prison, from love to love, from one side to the other. other of the Atlantic, as far as Italy. From the pages of his diary, we listen to the true voice of Chet Baker, who lets us enter his disheveled, fascinating world full - naturally - of music ".

"As a corollary to the text published by Minimum Fax, Massimo Popolizio tells and comments on the character of Chet Baker also through other writings, in prose and poetry chosen by him, interacting with Fabrizio Bosso and Julian Oliver Mazzariello and leading the public into a world, now dark now light, as was the life of the great Yale trumpeter ".