Patrik Laine was embarrassed to hear about the store: “Kind of scary” - one question silenced a Finnish star

Patrik Laine is now given the opportunity to shine as the team's number one star. He believes he will rise to the next level in Columbus. 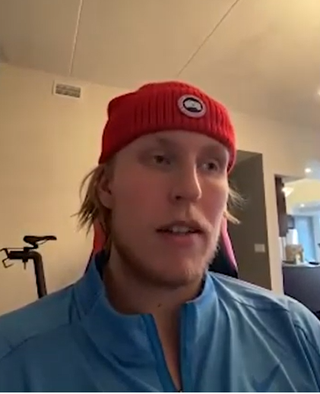 On Saturday, the NHL pounded.

Patrik Laine was traded from Winnipeg to Columbus along with Jack Roslovic.

Pierre-Luc Dubois came in to return.

The transfer could be expected, as the Laine, 22, camp had already been notified of a transfer request months ago.

When the giant deal finally took place, the Finnish star himself was confused.

You never know what to expect.

There are always rumors in the NHL, but when I was finally told about this earlier today, it was kind of a shock, and I didn’t know what to do, Laine said on the night of her transfer day at a Blue Jackets media event.

- Going to a new place and meeting new friends is kind of scary, but it goes well.

I know a few guys from there, a couple of Finns too.

It’s great to be a member of Blue Jackets now.

I am glad that they wanted me.

Laine herself doesn't know yet when she will be able to put on a new jersey for the first time.

The Finn is now moving from Canada to the United States in Ohio, so a work visa must also be handled.

After that, my corona quarantine is probably ahead.

- Now pakkailen my things and I'm ready to go when things work out, Laine told reporters from his home in Winnipeg hand.

Laine, who has represented Jets throughout his nearly 4.5-year NHL career to date, rejects not only familiar angles but also his long-time teammates.

There is also longing in the air.

- This was a tough place, of course.

There were a lot of top guys on the team who were here with me the whole time.

This is a bit sad day, but still I'm excited about the new opportunity in Columbus.

The Jets will leave me eternal friends and brothers.

- I am going to say goodbye to everyone, and I will see them in the corner bends next year.

Hopefully already in the playoffs.

The last match of the wave in the Jets was the encounter against Calgary that opened the season last week.

In it, he puts his last handprint on the prairie, leading his team to victory as the best player in the match.

Laine’s departure was also a tough place for many Jets supporters.

He was a player kept in the city.

At the media conference, Laine was asked how she believes she will be remembered in Winnipeg.

I always tried to be myself, both with the media and the fans as well as on the ice.

I always tried to be a good dude and a good teammate.

I hope people have good things to say and good memories of number 29.

When Laine was asked why things did not go the way Jets did in the end, the Finn quietly thoughtfully thought about his answer.

- This is a difficult question.

Right now I don’t want to think about it.

I want to leave it behind and take with me all those great memories of this team and teammates.

- Maybe this just didn’t suit me and a team with a lot of depth and top players.

Now it was just my time to continue the journey.

And the Jets got a soaring player to replace me.

At least part of the reason is thought to be that in the Jets, Laine never quite became the number one star on the team.

In the pecking order, the team’s great leaders Blake Wheeler and Mark Scheifele, always respected by head coach Paul Maurice, were always ahead.

Now he becomes the brightest diamond and number one star in his team’s attack.

The result is expected.

- Of course, every player's dream is to be the guy everyone trusts.

If such a place opens up, I will do my best to be worth it, Laine pondered IS’s question about the new setup.

A great opportunity for myself that I hope I can take advantage of.

Be the frontrunner and character for that team.

Laine is especially known as a gracious goal scorer, but the years at Winnipeg taught him more.

- When I came here 4.5 years ago at the age of 18, now the difference in playing it is like night and day.

I have learned so much about this game, how to be a player who wins battles.

There is a lot of this stuff.

Much remains to be done.

My opening game of the season was good.

I am ready to take the next step in Columbus, and I believe that it is big.

Hats on ice were not an unusual sight during Laine’s Winnipeg years.

In all, he rotten the Jets eight hat tricks and a total of 140 regular season goals. Photo: Fred Greenslade / ZUMA / Mvphotos

Laine has already had time to talk to her new supervisors, head coach John Tortorella and GM Jarmo Kekäläinen.

Enthusiasm has swelled from both sides.

The Finnish boss had also expressed his desire to Laine.

- I am of course open, Laine commented on the negotiation of any long follow-up agreement.

- I hope this is a place where I enjoy living and playing hockey.

Everything I've heard about the organization and the city has been positive.

The Blue Jackets have a good young team and I hope I can bring my playing and scoring skills to the team.

I’m going to throw things as hard as I can.

As the last Winnipeg player, Laine followed matches from the side.

The cause was reported as an upper body injury.

He assures him that there is no more trouble at Columbus.

- I should be fit to play when I get there.

This is nothing I should be worried about.

I don’t think anyone needs to worry, Laine said.