Spain: Real smiles again, Zidane saved in absentia Madrid (AFP) Under pressure after two poor performances, Real Madrid played Saturday against Alavés 4-1 for the 20th day of La Liga, and allows Zinédine Zidane, threatened and absent because of Covid-19, to breathe. A few days after the double elimination in the semifinals of the Spanish Supercup (2-1 against the future winner, Athletic Bilbao, on January 14) and in the Copa del Rey (against a D 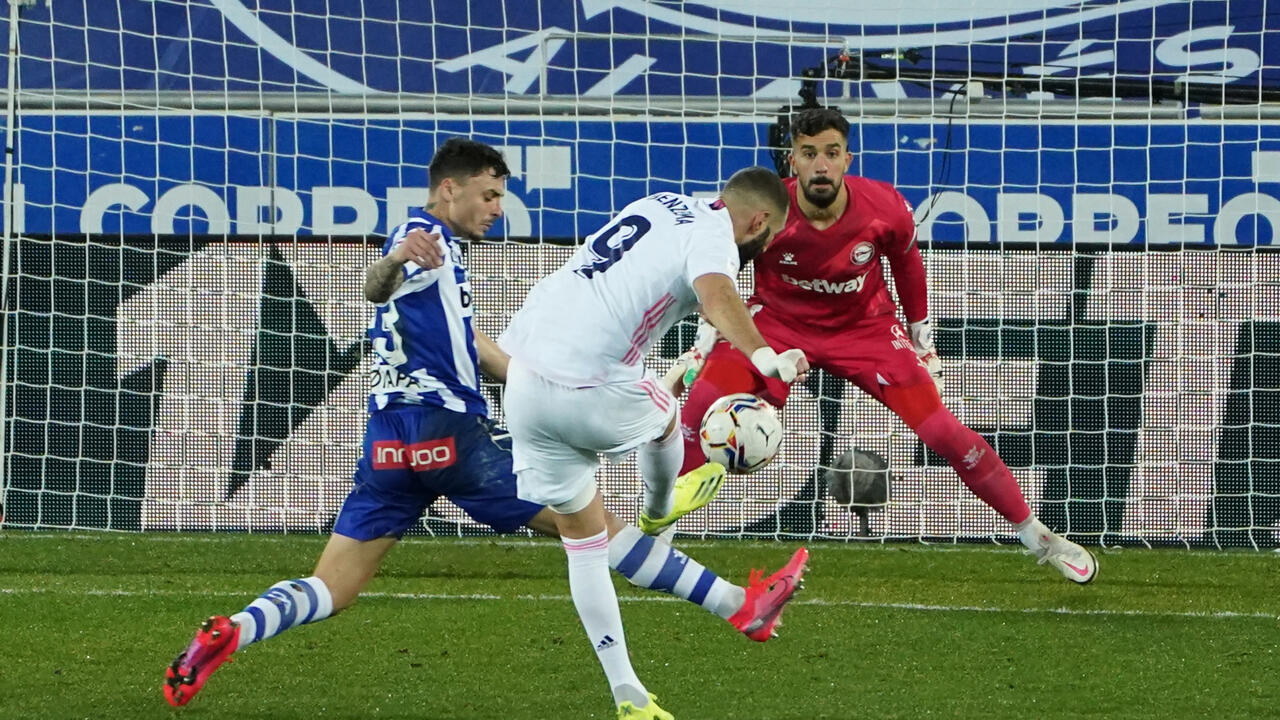 Under pressure after two poor performances, Real Madrid played Saturday against Alavés 4-1 for the 20th day of La Liga, and allows Zinédine Zidane, threatened and absent because of Covid-19, to breathe.

A few days after the double elimination in the semifinals of the Spanish Supercup (2-1 against the future winner, Athletic Bilbao, on January 14) and in the Copa del Rey (against a D3 team, Alcoyano, 2-1 after extra time on Wednesday), the Merengues quickly widened the gap thanks to nice goals from Casemiro (15th, head), Eden Hazard (45th + 1) and a double from Karim Benzema (41st, 70th), despite the reduction Joselu's score for the header (60th).

Openly criticized in the Spanish press after the two defeats in the Cup and the Spanish Supercup, Zinédine Zidane was absent in Vitoria-Gasteiz on Saturday evening, because positive for the new coronavirus.

He therefore left the reins of his team to his assistant David Bettoni ... and his players did not betray him.

In the absence of the Marseille thinking head, Sergio Ramos and Dani Carvajal, the Merengues still resumed their game on Saturday night, to temporarily get closer to four points from the leader Atlético Madrid (44 pts), who receives Valencia Sunday.

And this easy victory which somewhat spoiled the celebration of the centenary of the Basque club made it possible to revive certain elements of the group of "Zizou".

Belgian international striker Eden Hazard (30 years old, 106 caps) was able to find his way back to goals with a perfect opening from Toni Kroos behind the back of the Alavés defense just before half-time (45th + 1).

And, a few minutes earlier, he even wisely touched the ball to deflect it towards Karim Benzema for the first of the Frenchman's two goals (41st).

This is only Hazard's 3rd goal in 12 matches this season in all competitions.

The Belgian had not scored in La Liga since October 31, in an easy victory against Huesca (4-1).

While Zidane continues to insist on the patience to be shown with the often injured left winger since arriving in the Spanish capital (in the summer of 2019), this time, Hazard seems very close to his best: Saturday, we saw him sharp when taking balls, with an ability to accelerate and bring the game forward that we had not seen since his first steps at the "White House" ... despite still some avoidable bullet losses.

In the wake of the Belgian, other players were able to regain confidence before tackling the second half of La Liga, and set off in pursuit of Atlético in the league.

Raphaël Varane and Eder Militao, whose central hinge association has often led to great disappointment for the Merengues (their last three matches together resulted in three losses: 3-2 against Shakhtar Donetsk, 1-0 against Cadiz and 2-1 against Manchester City), were rather discreet but effective within the White Curtain.

Karim Benzema, captain, has evolved to an impressive level, the same as since the start of the season.

And veterans Luka Modric and Toni Kroos also made a flawless copy in midfield.

In short, a wet but ideal evening in the Basque Country for Zidane and Real, to gain momentum before the knockout stages of the Champions League in a month (first leg on February 24, return on March 16).

Earlier today, Real Sociedad led 2-0 against Real Betis, but broke down in the dying seconds of the match to concede a draw at home (2-2), and remain 6th, at the limit of European places.

Sevilla FC, like Real, swept away the promoted Cadiz 3-0 at home thanks to a hat-trick from the man in shape of the moment in Andalusia: Youssef En-Nesyri (35th, 39th, 62nd), who was even denied a 4th goal for an offside position.