They aimed at Liljevalch's art gallery at Djurgården. But now there is instead Nykvarnsparet's work "Thousands of vaccine doses" for public viewing outside the store entrance at Ica Maxi Wasa in Södertälje. 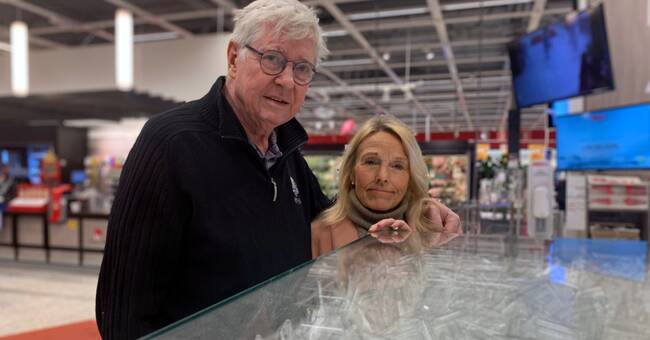 - The whole world is going through a pandemic where everyone is affected.

We want to manifest that and we have done that with our installation, says Gunilla Svantesson, who together with her husband Bosse created the work that now meets the grocery store's customers in Geneta.

It was in connection with Bosse being diagnosed with cancer in March last year at the same time as the pandemic broke out that he got the idea.

Together, the Svantesson couple created "Thousands of vaccine doses" during their journey through the pandemic and Bosses cancer treatment.

They applied to exhibit at Liljevalch's spring salon at Djurgården, but when it closed due to the pandemic, they had to look for a new place.

- We emailed hospitals and other places, but it was difficult, says Gunilla.

Finally, the grocery store in Geneta took over.

There, the artwork depicting a considerable amount of vaccine ampoules can now be viewed next to the well-attended hand alcohol holder outside the entrance.

Hear the couple talk about the work and see the customers' reactions to the odd feature outside the grocery store in the clip above.