Comment: The separation of the big clubs threatens the Champions League - that's why Finland should worry about the war between the football giants

The football super league planned for Europe scares the old rulers of the sport. There is cause for concern in Finland as well, writes Mikko Knuuttila. 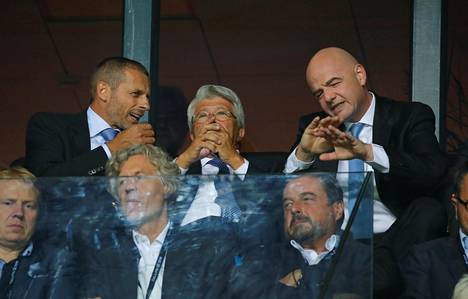 The international football federation Fifa and its six continental federations presented a rare direct threat on Thursday afternoon against an independent and partially closed European Super League planned by some major clubs.

This is the very weapon found in the arsenal of organizations.

It squeezes players who dream of national team success between a tree and a shell.

The unions ’statement was framed in response to“ media speculation, ”but in reality it spoke of deep fear.

The creation of the Super League would shake the power structures of international football in an unprecedented way.

As a cock, Fifa, Uefa, and their partners would be rudely pushed down.

Today, the organizations that run the billion-dollar turnover would become side performers managing Class B competitions and hobbyists with no money or the power it brings.

The threat of the Super League is acute.

The New York Times reported Thursday that the project, run in silence by Real Madrid chairman Florentino Perez and Manchester United, as well as the American owners of Liverpool, is well advanced.

One sign of the backstage situation came in October when FC Barcelona’s resigned chairman Josep Maria Bartomeu revealed that he had agreed that Barca would join the Super League.

Now, however, they are on the front line against a common enemy, the Super League. Photo: Maxim Shemetov / Reuters

The first victim of the new series would be the Champions League.

According to leaked data, the big clubs would play the Super League in the middle of the week and the main series in their own countries on the weekends.

This would make Uefa’s cash jam from the Champions League a second-class race that would likely die out at a rapid pace.

At the heart of the whole controversy is money.

The coronavirus, which has taken the public away from the gallery, has spurred the pounding of the euro, but the owners of large clubs have long been dissatisfied with the income distribution of modern football.

For example, in the period 2019-2020, the European club team competitions estimated Uefa at € 3.25 billion, of which € 2.55 billion was distributed to participating clubs.

From the point of view of the major clubs, they therefore lost at least EUR 700 million.

Clubs are also annoyed by the fact that they pay players ’salaries 12 months a year, but are only allowed to make money with them part of the time.

It’s hard for owners from North American sports culture to realize that clubs have to hand over their players to national teams for virtually free at regular intervals.

At best, players return to their employer only a little tired, at worst, in a national match, an injury occurs throughout the player or even a career-threatening injury.

Another thing that amazes owners accustomed to closed series is the chance to drop out or qualify for a series.

A team’s athletic failure can even destroy the club’s financial base.

According to the announced plans, 15 permanent club members and five clubs changing according to the success of national competitions would be admitted to the Super League.

This would further cement the position of giant clubs as the largest and most beautiful of the species.

From a small, neutral Finland, the battle for the Super League may seem distant.

No blue-and-white club today has seams to survive even the group stage of the Champions League.

Still, friends of Finnish football should be worried.

As elephants struggle, mice snuggle up to their feet.

In the current distribution of income in European club team competitions, crumbs have also fallen into the coffers of Finnish clubs as solidarity coins.

If the Champions League and the European League wither away, many Veikkausliiga will feel it badly in their wallets.

It would be an even more gruesome imprint if Fifa and partners carried out their threats and excluded super league superstars from the competition.

Then the World Cup and the European Championships would be even more shadows, and their mega-proceeds would no longer slip into Finnish football as well.